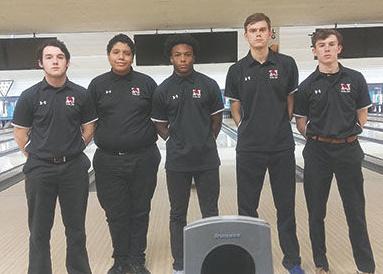 The Marist bowling team finished third, advancing to the Lockport sectional as a team. It was the first time the team advanced out of the regional since the Illinois High School Association added a regional round in 2013-14. (Review photo) 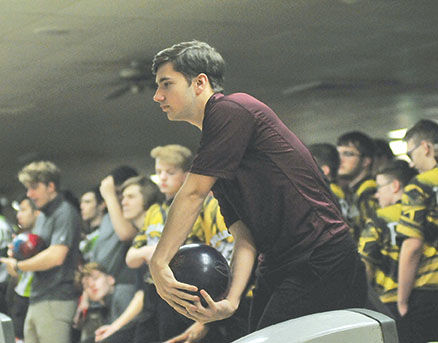 Br. Rice junior Tony Lundy advanced as an individual out of the regional, shooting a 1,270 series with a 243 high game. (Review photo) 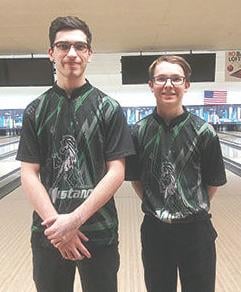 The Marist bowling team finished third, advancing to the Lockport sectional as a team. It was the first time the team advanced out of the regional since the Illinois High School Association added a regional round in 2013-14. (Review photo)

Br. Rice junior Tony Lundy advanced as an individual out of the regional, shooting a 1,270 series with a 243 high game. (Review photo)

With a trio of teams battling for one spot to advance to the sectional and two others within striking distance, the Marist bowling team just needed to hold its own and stave off a charge in the sixth game of the tournament.

Sitting in fourth, the RedHawks were in line to be the last team to advance.

But, for seniors Vinny Mendez and Kivonte Houston, just holding on wasn’t enough. The duo wanted to guarantee their spot.

Mendez rolled a 242 and Houston a 239 as Marist leapfrogged into third place at the Brooks regional on Jan. 18 at Skyway Bowl. The RedHawks advanced as a team to the Lockport sectional.

“It’s that last-minute push. You don’t want it all to collapse on us,” Mendez said. “You do whatever you can to help provide the extra security.”

Marist advanced as a team for the first time since the Illinois High School Association added a regional round in the 2013-14 season.

“Us being seniors, we felt that with this team we wanted to get them to that next level,” Houston said. “It’s something we’ve all worked really hard for. The juniors are talented. It’s our last year, so you want to make a big impact.”

Mendez threw seven straight strikes in the sixth game before finally missing a strike in his 242 game, his season best.

“I try to block it out and think ‘I need to get a strike this frame,’” Mendez said. “You think you need to be perfect. It’s always individuals getting through. It’s unreal to see how much the team has improved.”

A standout defensive back and captain on the Marist football team, Houston also expects to commit to his college of choice in the coming weeks.

“The second set was especially close, so I wanted to make sure I picked it up to make sure we’d go top four,” Houston said. “[Coach Mike Brennan] is a football coach, too, so for us to make it as a team, that speaks volumes. It’s a good step in the right direction.”

On a tough day for the Crusaders, juniors Tony Lundy and Josh Bell advanced as individuals as the team finished sixth (5,455 series).

“Everyone got into their own heads. I did it, too,” Lundy said. “It all comes down to spare shooting. Spares can win you games, and we had a lot of one-pin spare misses. That adds up so much.”

Br. Rice rolled two season-low games in the first half of the regional.

The top fours teams and top 10 individuals from non-qualifying teams advanced to the sectional on Jan. 25 at Strike and Spare II.

Lundy (Mt. Greenwood) finished 55th at state as a sophomore. Looking to clinch a second straight berth, he said the sectional will be all about mindset.

“I learned overall that it comes down to how positive you are,” Lundy said. “I plan to be more positive with my game. I wasn’t at my peak today, but it was enough to make it through. Keep clear thoughts and not get down on myself for a bad bowl.”

A year ago as a junior, Charlie Novak did not make the team for Evergreen Park (EP).

He soon switched over to a two-handed throwing motion, testing it out in all the bowling leagues he could join.

What a difference a year makes.

Novak rolled a 1,229 series with a 246 high game as he and sophomore Connor Pula (1,209 series, 225 game) advanced as individuals. EP finished fifth in the standings (5,502 series), just 7 pins behind Stagg for the last team qualifying spot.

“I switched to two-handed bowling, and it paid off,” Novak said. “At first when I started, it was difficult. The more I practiced, the more I did it in league, the more I got the hang of it. The better I got at it.”

Pula was glad to advance after a day when he felt like he struggled.

“I’m pretty happy to make it. I didn’t think I would,” Pula said. “I was lucky and should have done better. Next week will be tougher. I’ll hopefully get better, and I’ll be fine.”

“We turned things around. It was that magic lunch,” Hibbler said with a laugh. “[When you’re down] it’s something you’ve got to go get it. Don’t think too much. Just go do it and get it done.”

Hibbler is also a third baseman on the baseball team in the spring season.

For Laury, he tried to keep the Mustangs energized. MPHS finished in seventh place (5,200 series) in the standings.

“I try to keep the energy up. I don’t want to bring any bad energy to the team,” Laury said. “I made an adjustment, it worked, and I stuck with it. I’m still trying to make those adjustments in my mind.”

Sophomore Zachary Reynolds advanced as an individual for the Cyclones, finishing in 16th place with a 1,173 series. He saved his best for last, rolling a 236 in the sixth game.