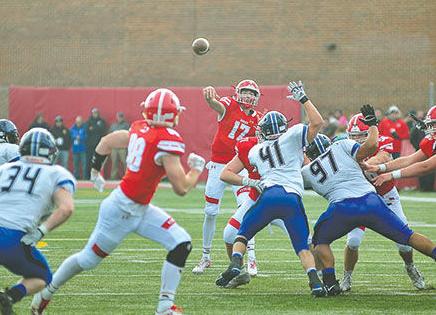 Marist senior quarterback Hayden Mikesell connects with Brendan Barry (88) across the middle for a 27-yard touchdown strike in the second quarter against Lincoln-Way East. (Review photo) 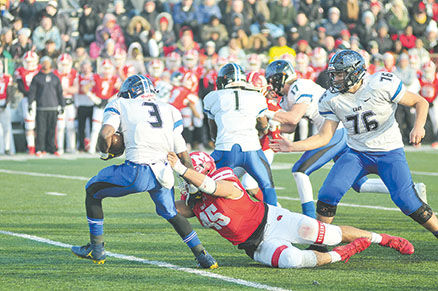 Marist senior quarterback Hayden Mikesell connects with Brendan Barry (88) across the middle for a 27-yard touchdown strike in the second quarter against Lincoln-Way East. (Review photo)

After a loss to Nazareth Academy in Week 7, Marist senior linebacker Colin Bohanek looked around the locker room and knew his team had the talent to survive its impending do-or-die situation.

With a 3-4 record, the RedHawks just needed a good, strong push.

He was correct in his thinking as Marist won the two games it needed to reach the state playoffs and then rolled into the Class 8A semifinals. However, its bid ended on Nov. 23 against Lincoln-Way East (LWE) 24-7.

It was the second straight year the RedHawks advanced to the semifinals. Bohanek, an Eastern Illinois recruit, said the team took off after Week 7.

“Things started clicking, and we went from there,” Bohanek said. “It’s great. It all starts with team chemistry. We kept believing in ourselves. We never had any doubt. We knew we could go out and beat anybody.”

LWE (13-0) advanced to play undefeated Warren Township on Nov. 30 in the state title game in DeKalb.

Down 10-7 against LWE in the third quarter, the RedHawks were driving, but a fumble near midfield gave the ball back to the Griffins.

“That was a big momentum shift, but the game wasn’t won or lost on the turnovers,” said Marist Coach Ron Dawczak. “That’s a great defense, and they’re going to make plays. You can’t fault anybody.”

LWE defensive back Matt Kordas squashed another Marist red-zone drive with an interception in the end zone late in the second quarter.

Marist senior QB Hayden Mikesell finished 12 for 32 in passing for 171 yards and a touchdown, a 27-yard strike to tight end Brendan Barry in the second quarter. John Kennedy converted the PAT.

Marist couldn’t convert on 2 fourth-down attempts in the second half.

“They’re a great team with a lot of talented guys,” Markett said. “We had the ability to win the game. We were in it almost to the very end. A couple things went their way instead of ours.”

Even when Marist’s playoff hopes seemed in doubt late in the regular season, Markett was confident the RedHawks would rally.

“We were sitting 3-4, and everyone counted us out,” Markett said. “We still had confidence in ourselves. We’re a bunch of grinders. We molded together as a team and turned things around.”

Dawczak has guided the RedHawks to a 30-5 record in 3 seasons.

“These seniors rose up to the challenge when their back was against the wall,” Dawczak said. “We were dead at 3-4. They blocked that out, came together and continued to work and fight and win games that people thought we had no business winning.”