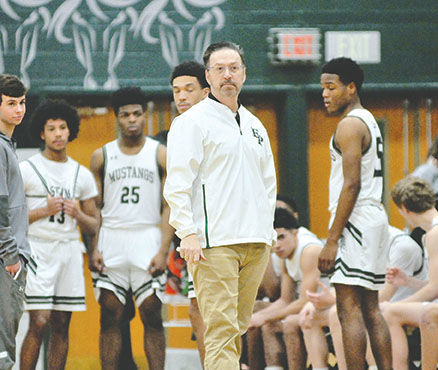 After nine years as head coach, Pat Flannigan has stepped down as the Evergreen Park boys basketball coach. He will be an assistant athletic director for the Mustangs. (Review file photo) 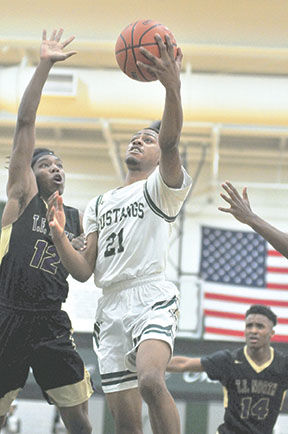 Senior Rasheed Dyson led the Mustangs with 22 points in their season-ending loss to Kankakee in the regional semifinal. (Review file photo)

After nine years as head coach, Pat Flannigan has stepped down as the Evergreen Park boys basketball coach. He will be an assistant athletic director for the Mustangs. (Review file photo)

Senior Rasheed Dyson led the Mustangs with 22 points in their season-ending loss to Kankakee in the regional semifinal. (Review file photo)

Coach Pat Flannigan remembers a handful of wins that stand out in his career since 2001 at Evergreen Park High School.

But, after announcing that the 2019-20 campaign would be his last as the boys basketball coach for the Mustangs, what Flannigan really remembers goes beyond any scorebook.

“Some of the memories are the wins, but it’s more the people you work with,” said Flannigan, who will now be the assistant athletic director at the school. “Starting with our last home game, I got some texts from coaches I’ve coached against for years. I had a lot of former players message me. That’s what was special to me.”

Flannigan had also worked for 10 years as an assistant in the boys program for Coach Bruce Scaduto. When Scaduto shifted to coaching the girls program, Flannigan took over the head spot with the boys program.

With the opportunity to become assistant athletic director, Flannigan decided the time was right to make a move.

“I’m excited for the new challenge and not just helping one program but being able to help many programs,” Flannigan said. “It’s a long basketball season, and it’s year-round coaching almost. My wife would say it is year-round. Twenty-eight years coaching, it wears on you. I’m excited to change my career a little bit.

In nine seasons, Flannigan led the Mustangs to a 102-159 record.

Flannigan coached his last home game on Feb. 21 as Evergreen Park battled Richards. The Mustangs’ season came to an end on March 3 with an 87-60 defeat to host Kankakee in a regional semifinal.

Throughout Flannigan’s career, he was always working to field the best team possible, but he also wanted to provide his players with something to remember.

“You want to give them new experiences,” Flannigan said. “We visited a lot of states and played against some really cool teams in some really cool gyms. That’s the amazing stuff. That’s what I’m most proud of.”

“This has been a great place to be. It makes you want to work hard,” Flannigan said. “People in the community need to know what a great place it is. I’m really enjoying teaching, and I’m looking forward to continuing to work at that and keep getting better as a teacher.”