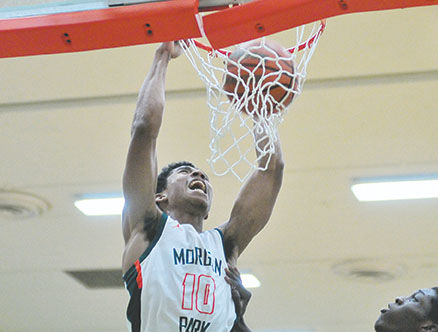 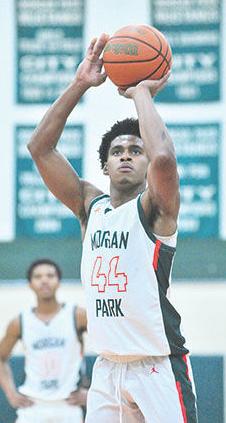 Adam Miller, a senior and University of Illinois recruit, finished with 18 points and 12 assists for the Mustangs. (Review photo) 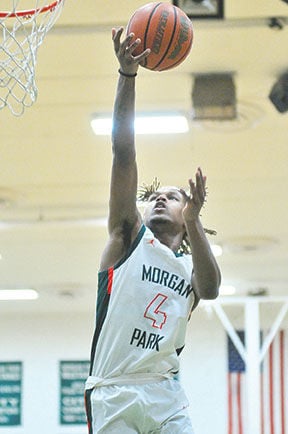 Adam Miller, a senior and University of Illinois recruit, finished with 18 points and 12 assists for the Mustangs. (Review photo)

Transferring from Lake Forest Academy to Morgan Park High School (MPHS) in December 2018, Brandon Weston was unable to play for the Mustangs in that second semester.

He sat and waited and kept working on his game, knowing his junior year could be his breakout season.

Weston is showing that he continues to be a force for the Mustangs after scoring 30 points and pulling down 12 rebounds as host MPHS rolled past Brooks 102-61 on Jan. 16 in a Chicago Public League Red-South/Central showdown.

“I’m really trying to make a statement because I wasn’t able to play last year,” Weston said. “A lot of people don’t know what I can do. I wanted to come out this year strong and try to show people ‘I’m Brandon, and I’m here.’”

It was the Mustangs’ second triple-digit scoring effort of the season. MPHS improved to 11-6, 5-1.

Miller, the 2019 Illinois Gatorade Player of the Year and a University of Illinois recruit, continues to be the go-to player for the Mustangs, but a huge third-quarter effort came while Miller was getting a rest on the bench.

Already leading 35-24 at halftime, MPHS blew up for a 33-point third as the game turned into a dunk-contest track meet.

Weston scored 13 points in the quarter with Burrell, Davenport and Taylor, a 6’7” powerhouse, taking part in the onslaught.

“A lot of people don’t know that we have really good guys coming off the bench,” Weston said. “When guys came off the bench in the third, they really stepped up. That helped us get that big run.”

Miller returned late in the third and continued at the point of the fast break into the fourth.

“I’m glad my guys are picking it up. We’re working hard every day in practice,” Miller said. “Brandon is Robin to my Batman, and I’m the Robin to his Batman. It goes both ways. He’s a great player, a three-level scorer who always plays with heart. I love playing with him.”

Miller (6’4”), Weston (6’5”) and Taylor took on the Brooks’ guards at halfcourt as the Mustangs unleashed their press.

With wingspans for miles, Weston and the Mustangs know how difficult it can be for opponents to get past a halfcourt press from MPHS.

“They look scared,” Weston said with a laugh. “We’ve got [Javonte], the best freshman in the state, and he’s 6’7” with those long arms. It can be really scary out there when we’re playing defense like that. We’re trying to keep teams under 40 points.”

The team’s schedule is as rough as ever, but Miller knows MPHS will be ready for a deep postseason run.

“The team has definitely developed. We’ve lost 6 games. Every loss is a lesson,” Miller said. “It teaches you that when tournament time comes, this is what you have to do. You can’t go back, so always go forward.”

In the midst of its tough schedule and with the Chicago Public League playoffs around the corner, MPHS Coach Nick Irvin said his team is in good shape despite its record.

“We’re in a good place right now. We’re geared up to go to state,” Irvin said.

“You don’t win state overnight, so like I say all the time, take it one game at a time. Just continue to get better against a brutal schedule.”