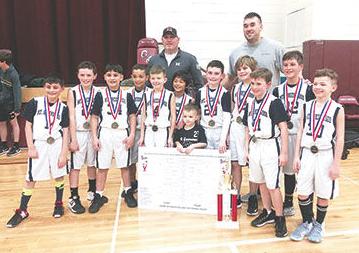 Mt. Greenwood guard Collin Lawlor goes up for a layup in the first half. Lawlor finished with 18 points and 10 rebounds for the Eagles. (Review photo) 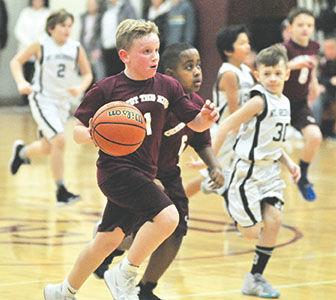 Christ the King guard Jack Badke leads a fast break in the second half. Badke led the Screaming Eagles with 5 points and 7 rebounds. (Review photo)

Mt. Greenwood guard Collin Lawlor goes up for a layup in the first half. Lawlor finished with 18 points and 10 rebounds for the Eagles. (Review photo)

Christ the King guard Jack Badke leads a fast break in the second half. Badke led the Screaming Eagles with 5 points and 7 rebounds. (Review photo)

Through the first month-plus of the season, Collin Lawlor has been a standout player for the Mt. Greenwood fourth-grade basketball team.

And as the Eagles showed over the holidays, they are making some big strides as a team.

“Collin’s a good player. Everyone is pitching in a little bit,” said Mt. Greenwood Coach Brian Healy. “Thanksgiving was the first time they all played together. Now, they’re used to playing together. When Collin drives, they can get to open spaces and try to get some better shots.”

Mt. Greenwood improved to 16-0 with the championship victory.

Tracy and Fleming set the tone right off the opening tip as Tracy scored on a fast-break bucket 20 seconds into the game. Fleming followed with an inside basket after a rebound.

The Eagles were off and running as Lawlor scored 8 straight and Mt. Greenwood opened up a commanding 12-0 lead.

“This is a good group,” Healy said. “We’ve got some good players and good teammates. Everyone gets along pretty well, and they work well as a team. They’re helping each other out.”

Mt. Greenwood led 14-2 at halftime and 24-6 midway through the second half. Holding off a late CK charge, Lawlor grabbed a rebound and went coast to coast for a score.

After an O’Boyle basket, Lawlor added another after a steal and a hard drive to the hole.

The Christmas championship was a rematch of the St. Cajetan Thanksgiving tournament championship on Dec. 1; Mt. Greenwood won that game 30-20.

Healy said the two teams always battle it out.

“The kids are all enjoying it, and everyone is into the game. They’re keeping a level head,” he said. “We’re not overlooking anyone we play. It’s a nice little rivalry [with CK] that we’ve got going.”

Shaking off a tough first half, CK stormed back during the second half as the team’s deep roster delivered some key plays.

Jack Badke scored on a drive through the defense with just over 5 minutes to go in the second half. DeShawn Jones continued the run with a hard-fought basket off an assist from Case Cosme.

Badke added a putback and a free throw, and Cosme drilled a baseline jumper as CK got to within 9 points at 24-15 after trailing by as much as 16.

“If we could have made a couple shots early, they might have relaxed,” said CK Coach Andy Cosme. “With each basket and the deficit growing, they tightened up and got a little nervous.”

Badke paced the Screaming Eagles with 5 points and 7 rebounds. Jones and Patrick Malloy chipped in with 3 points each. Case Cosme and Johan Borjas scored 2 points apiece.

Despite the loss, Coach Cosme appreciated his team’s competitive spirit.

“They’re all improving. This was the best bench game we’ve had in a long time,” Cosme said. “Our bench woke us up. It’s nice to see the progression, not just offensively but defensively. All 11 kids played really well tonight.”

Robert White led Sutherland with 8 points in the third-place game. David Brown and Terrence Washington added 2 points each for the Bulldogs.