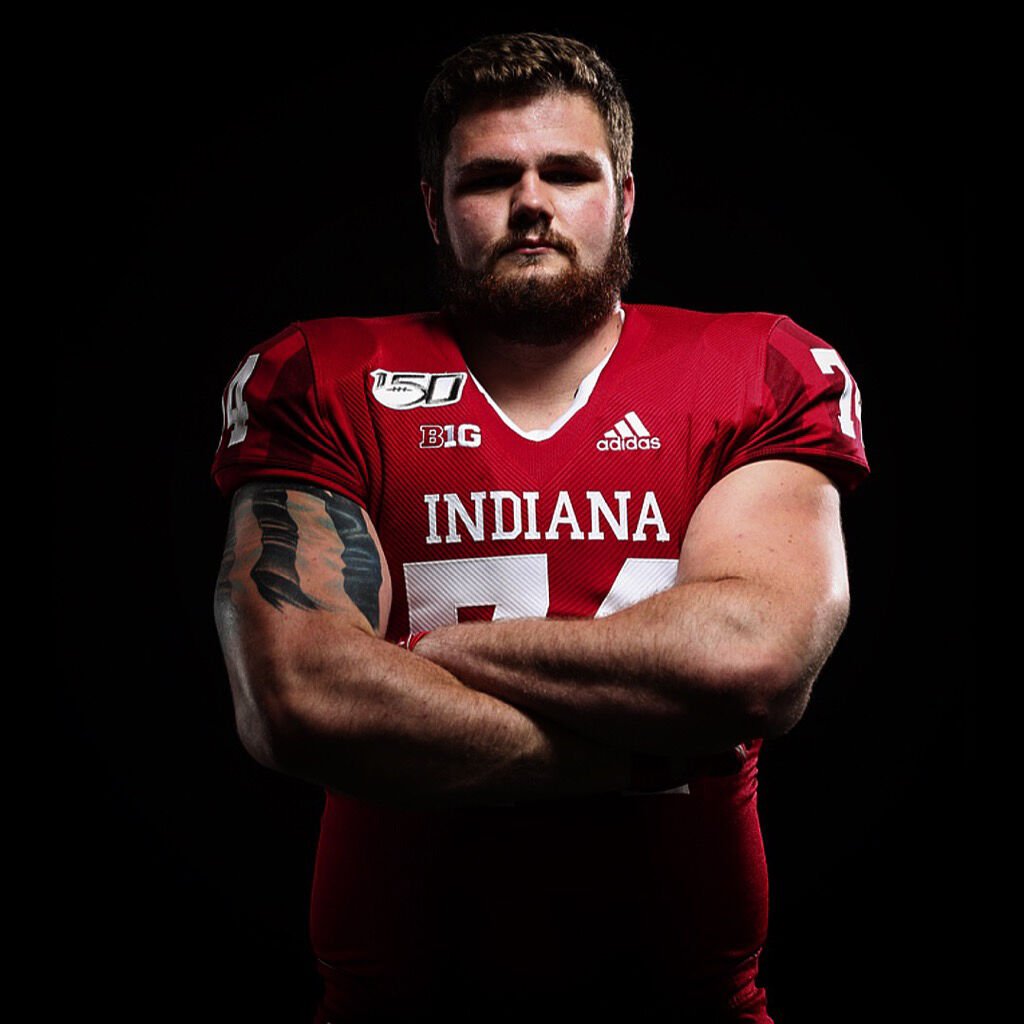 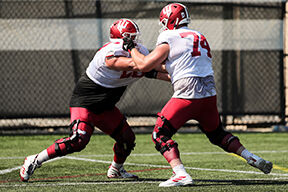 Offensive lineman Nick Marozas (right) works in practice last season with the Indiana University football team. Marozas is well on his way to recovery after undergoing back surgery last October. Marozas is a Beverly resident. (photo courtesy of IU Athletics) 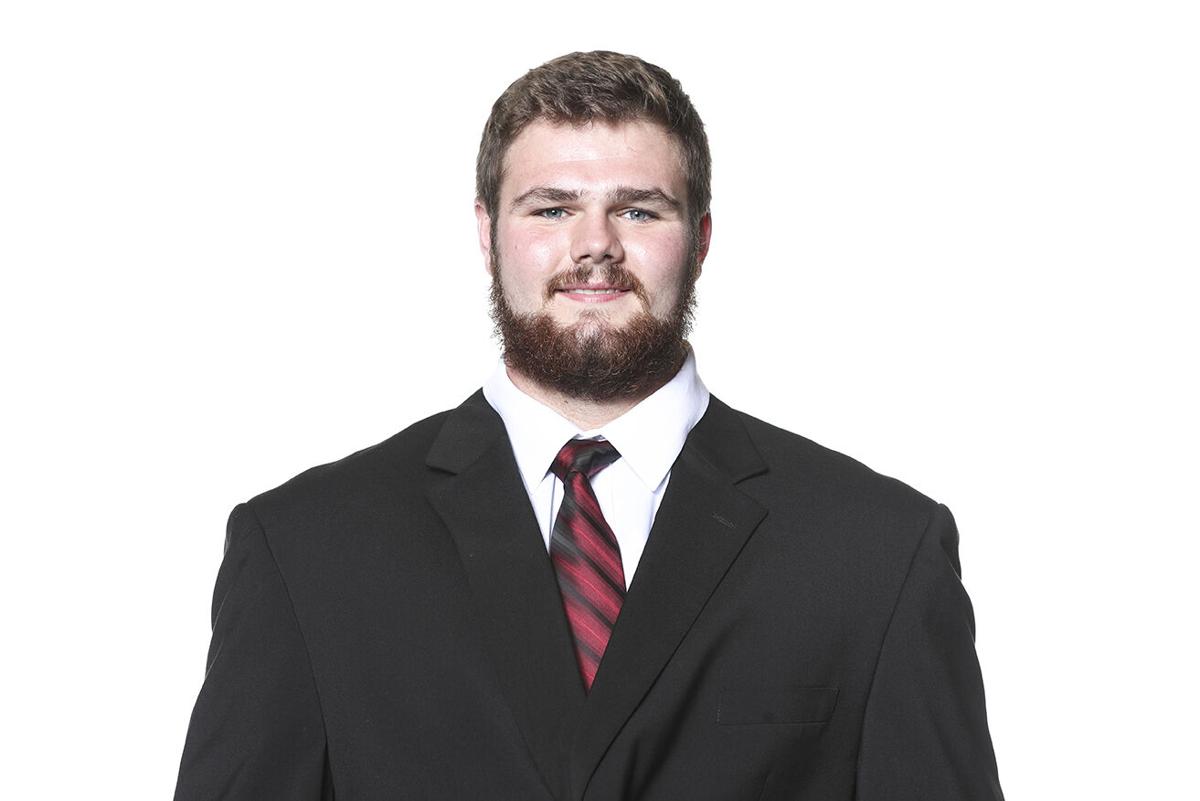 Offensive lineman Nick Marozas (right) works in practice last season with the Indiana University football team. Marozas is well on his way to recovery after undergoing back surgery last October. Marozas is a Beverly resident. (photo courtesy of IU Athletics)

Nick Marozas, a 2018 Br. Rice grad, was getting ready for practice with the Indiana University (IU) football team on Sept. 16 when he checked his phone.

Five weeks after postponing the football season, the Big Ten Conference had reversed its decision, and football is now moved back to the fall.

“It definitely brought a different feeling, a different buzz,” Marozas said. “We’d been working through the offseason knowing a game we were working toward. It was tough to have it taken away. With the news, there was an energy at practice and in the locker room.”

Marozas, a 6’5”, 286-pound offensive lineman, is in his junior year at IU and his redshirt sophomore season with the football team after redshirting his freshman year.

Marozas is a Beverly resident and graduate of Christ the King Elementary School.

Through the ups and downs of the last few months, Marozas tried not to get wrapped up in the rumors of the season being played or being canceled.

He returned to Bloomington, Ind., in late June and was working out with the Hoosiers football team under social-distancing guidelines and health restrictions.

“There were rumors coming out, but when the Big Ten schedule was released this summer, we were pretty confident we’d be playing,” Marozas said. “Coach Allen told us to ignore what the media was reporting. If he heard anything, he would tell us.”

Then, on Aug. 11 the presidents from conference schools voted to cancel the football season until spring 2021.

The Big Ten was the first Power Five Conference to decide not to play this fall while the SEC, ACC and Big 12 all decided to play.

“It sucked to hear that news. We’d been going all out working out and practicing so we’d be ready [for the season],” Marozas said. “Mentally, we were ready to get back.”

The reinstatement of the fall season comes with strict medical protocols, including daily testing for student-athletes, coaches, trainers and other individuals on the field.

Test results must be completed and recorded prior to each practice or game. Daily testing will begin Sept. 30.

Any athlete with a positive test for COVID-19 will spend an automatic 21 days away from the team. To return, athletes must receive clearance from a cardiologist.

Marozas said he was required to sit out in August for a week of practice when a teammate tested positive for the coronavirus.

“It’s worrisome that it could happen at anytime and you have to sit out,” Marozas said. “It’s out of your control though.”

It has been a chaotic year-plus for Marozas as the offensive lineman navigated the pandemic on top of his recovery from back surgery last October.

It was a late July practice in 2019 when Marozas felt two pops in his back doing squats in the weight room. Just as he was feeling at his peak, gaining weight the right way, improving his athleticism and agility, his season was put on hold.

“I heard those two pops in my back. I could barely get up,” Marozas said. “I dealt with it through fall camp, but at a certain point, I knew I needed the surgery.”

Marozas then started the slow process of rehab and recovery. He watched as his Hoosier teammates finished 8-5, ultimately losing to Tennessee in the Gator Bowl.

When spring football was canceled due to the pandemic, Marozas made the most of his time back home, strengthening and rehabbing his back.

“I had to get adjusted to my new self,” Marozas said. “I had to get my body stronger, but I had to do things differently, especially with weights. Even sitting on the couch, I had to keep better posture.”

Marozas estimates he’s at about 85 percent now as he continues his recovery. He’s limited to conditioning and workouts without taking part in any contact drills.

As Marozas said, the athletic training staff is being cautious about his return.

The Big Ten schedule was released on Sept. 19. IU will open on Oct. 24 with a home game against Penn State.

Marozas can’t wait to get into the reconfigured 2020 fall season, even if the Hoosiers will be playing in empty stadiums.

“100 percent, it was great just to be back on the field for workouts,” he said. “It was nice for my teammates to be able to see me out there and not walking slightly bent over. It sucked sitting out. It was a great feeling to be back.”