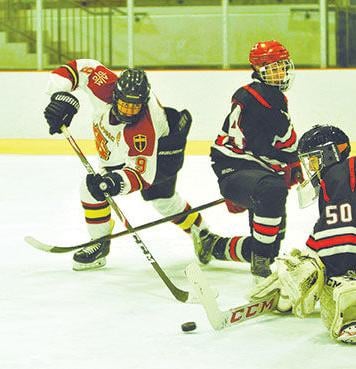 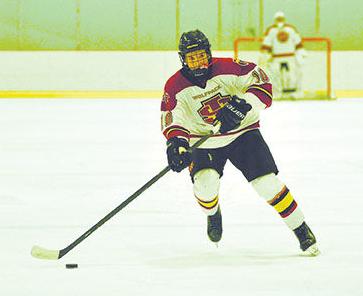 Senior forward Will Gerami heads up ice during a breakaway in the first period. Gerami scored 2 goals for St. Ignatius against Marist. (Review photo) 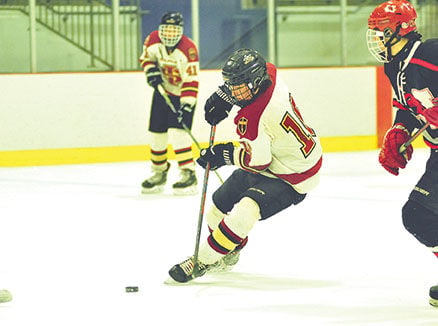 Senior forward Will Gerami heads up ice during a breakaway in the first period. Gerami scored 2 goals for St. Ignatius against Marist. (Review photo)

Max Pasiennik heard all the doubters through the offseason and well into the season.

After losing 13 seniors, including three All-State players, the St. Ignatius hockey team simply couldn’t be as good as it was last year.

Well, nobody told that to the Wolfpack.

“It’s a little bit different this year,” Pasiennik said. “We lost 13 seniors, so we have to trust a lot of younger guys to take on bigger roles. They’ve done a really good job. People have doubted us, saying we wouldn’t be as good as last year, but we’ve played really well.”

The win over Marist and a convincing 6-2 win against Notre Dame on Jan. 12 improved St. Ignatius’ CCHL record to 15-2-1-1. Providence Catholic took a 16-2 record into a game Jan. 13 at Carmel after press time as both teams chase the top seed in the upcoming Kennedy Cup playoffs.

St. Ignatius has lost in the championship series the last two years.

“We finished first in the regular season last year but weren’t able to win it,” Pasiennik said. “This year, [with or without] the top seed, we’ll have to battle through the playoffs. That’ll make us even more ready for the finals if we get there.”

In the Marist win, the Wolfpack showed off its balanced attack on all its lines. Senior Will Gerami led the way with 2 goals while Joey Velarde, Connor Kause, Leo Smat and Nick Mathurin tallied a goal apiece.

“A lot of credit to my linemates, Will and [Sean Doyle], two of the best teammates and linemates I’ve ever had,” Pasiennik said. “We have really good chemistry, and we like that pressure that we need to score every night. We’ve done a good job.”

Patrick O’Connell, Gerami and Doyle have double-digit goals in the league.

“We’ve tried to balance it out and get everyone going,” Gerami said. “We’ve done a pretty good job with that. We’ve all been working together as a team. That’s been a big positive so far.”

Velarde broke a 1-1 tie midway in the second period, ripping a shot from the goal line on the left that somehow deflected past Marist goalie Michael Fischer.

Kause added a score about two minutes later, knocking in a point-blank shot from the left side following a scrum in front of the net. St. Ignatius closed the game on a 5-0 run.

For Pasiennik and Gerami, it’s been a whirlwind junior and senior season. Both players were on club teams their freshmen and sophomore seasons but opted to come out for their high school team as juniors.

“We both decided to come play for Ignatius. It was a good idea,” Gerami said. “It’s been a lot of fun, not just in the classroom but on the ice, too. It’s a fun environment, and our team’s making a good run. We’re looking forward to the back end of our season.”

Senior Jeremy Shue picked up the win in goal for St. Ignatius.

Looking to the league and state playoffs, Gerami knows the game plan.

“We’ve got to show up with the same amount of energy every night. Marist is really picking up their game this season,” Gerami said. “We need pucks deep and pucks out of the defensive zone, pucks on net, whatever we can get, and stick to a hard-fought game plan and get the win.”