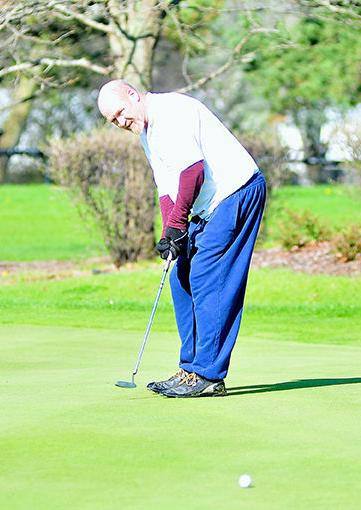 Larry Bennett, a Midlothian resident, was the first golfer to tee off on May 1 at Fountain Hills Golf Club after Gov. J.B. Pritzker eased restrictions pertaining to some non-essential businesses. (Review photo) 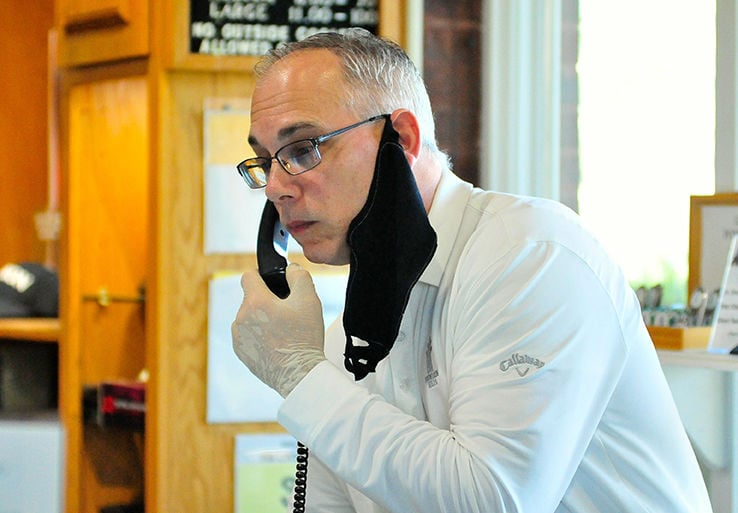 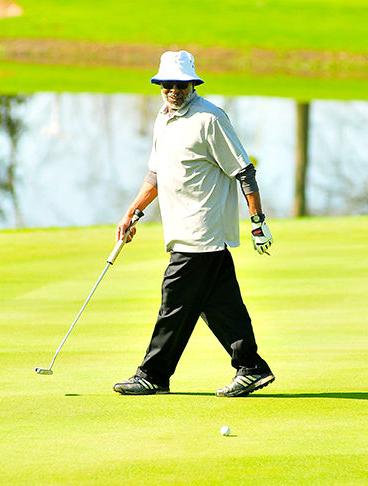 Kenneth Hunt, a Chatham resident, lines up a putt on No.-9 at Fountain Hills Golf Club. Hunt was out bright and early on May 1 to tee off at the nine-hole course. (Review photo)

Larry Bennett, a Midlothian resident, was the first golfer to tee off on May 1 at Fountain Hills Golf Club after Gov. J.B. Pritzker eased restrictions pertaining to some non-essential businesses. (Review photo)

Kenneth Hunt, a Chatham resident, lines up a putt on No.-9 at Fountain Hills Golf Club. Hunt was out bright and early on May 1 to tee off at the nine-hole course. (Review photo)

Standing behind the counter in the clubhouse at the Fountain Hills Golf Club in Alsip, Rich Gottardo went to answer the phone.

He wore a facemask and latex gloves as he took another reservation during a busy morning on May 1.

Golf may be different, but at least it was back.

Following Gov. J.B. Pritzker’s easing of restrictions on non-essential businesses, golf courses reopened across the state on May 1, albeit with some strict rules concerning social distancing.

“It’s a great day to see it happen, especially with the rains we had in recent days,” Gottardo said. “The golf industry was pushing hard with the governor to see if we could reopen courses. It’s a good thing to see that golfers are itching to get back out.”

The club manager at Fountain Hills, Gottardo is in his 17th year at the nine-hole public course.

Gottardo had golfers out early with tee times at 6 a.m., and he expected to stay busy all weekend as golfers took advantage of the chance to get out on the links.

The first golfer on May 1 was Larry Bennett, a Midlothian resident and regular at Fountain Hills. During the Illinois quarantine, Bennett did play golf in Indiana with its less restrictive rules on golf courses.

“I’ve still been playing over in Indiana, but yeah, it was good to be out here playing,” Bennett said. “It’s nice to be playing. It was just practice. I wasn’t keeping score, just getting some swings in.”

Not too far behind was Kenneth Hunt, a Chatham resident.

Hunt was originally scheduled to play with three friends in two groups in accordance with the eased restrictions.

“Everybody said they wanted to play, but when we were able to, they all canceled,” Hunt said with a laugh. “Four people down to one, I think they were still a little scared.”

However, Hunt said, he made the most of his time back on the course.

“It’s been terrible not being able to play. It was a little rough today, but this is awesome to be back,” Hunt said. “There’s no one word to describe it. Exhilarating to be back, challenging, it’s fun to be out here and nice to get out.”

Hunt said he hopes to get out to a course again soon.

For all the courses, public and private, across the state, social-distancing rules are still in effect even with the reduced restrictions.

Players can only be grouped in twosomes. Instead of 10 minutes between tee times, golfers now must tee off 15 minutes apart.

Driving ranges and putting and chipping greens are not available either.

No motorized golf carts may be used, although individuals with a physical disability or limitations may rent a cart.

Courses will not rent pull carts either. Golfers must bring their own.

With the new rules, Gottardo said, it’s all about spreading the word about the regulations.

“It’s communicating with people pretty much,” Gottardo said. “We explain to the customer to not show up any sooner than 15 minutes before their tee time. The general public has been understanding. We need to do this to come out on the better side of this virus.”

“The main thing is we’re out playing golf. Just follow the rules,” Krizic said. “There are a lot of businesses really hurting. [The golf industry] is hurting. So, for golfers, go out, enjoy yourself and hit that silly white ball.”

During the quarantine, Krizic did his best to keep in touch with members.

“The cards we were dealt weren’t the best with courses closing, but we figured ways to supply as much golf as we could,” Krizic said. “We communicated through Facebook and our online tee sheets. You send videos out to the membership on how to handle things when you come back to the facility.”

Krizic said the course was packed during opening weekend.

He expects demand to diminish a bit in coming weeks, but he knows the club’s golfers are thrilled to be back.

Krizic also serves on the Illinois PGA Board of Directors. He said the restrictions on golf courses could be eased even more at the end of May, making way for the thick of the summer golf season.

“Ask golfers, they’re tickled pink they can come out and play,” Krizic said. “For mental health, to get out of your house and get on the course, I think that’s the main goal, get back to some sense of normality. This helps brings that normal back.”