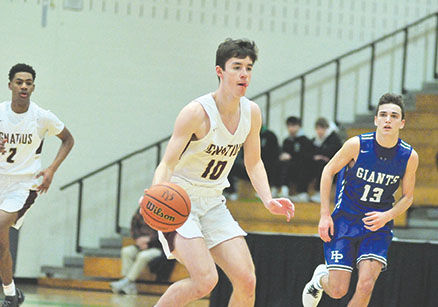 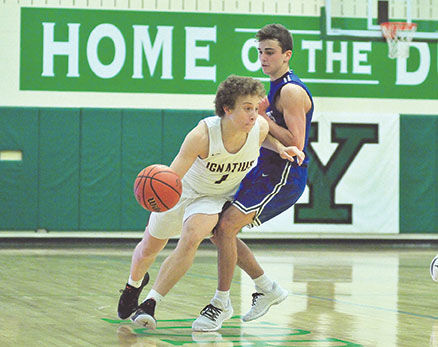 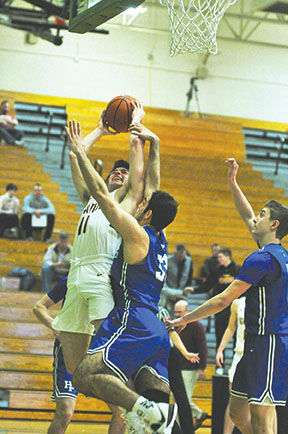 Senior Luke Collins fights for a shot on a baseline drive. Collins finished with 2 points and 7 rebounds. (Review photo)

Senior Luke Collins fights for a shot on a baseline drive. Collins finished with 2 points and 7 rebounds. (Review photo)

Being a leader on a young team this season, St. Ignatius senior guard Daniel Florey has done his best to set up his teammates and pass the ball whenever possible.

Florey showed that on Dec. 28 when he dished out 12 assists in a win over Batavia.

However, the 6’3” sharpshooter can still light up the net as he demonstrated on Dec. 30 by pouring in 22 points in a 47-40 victory over Highland Park in a consolation game at the Jack Tosh Holiday Classic at York High School in Elmhurst.

“I’ve been focusing on distributing lately, trying to get the younger guys the ball and get the scoring more spread out, but it’s nice to have that [scoring] option,” Florey said with a smile. “I’ve been able to cut down my turnovers and make better decisions.”

At the deep 32-team York tournament, St. Ignatius went 3-1, improving to 11-4 overall. It is the program’s best start since 2011. The Wolfpack hosted Marist on Jan. 7, after press time.

“The biggest thing for me is our team chemistry,” said Monroe, who is in his fourth season as head coach. “They really get along and play for each other. When you have that, the X’s and O’s are secondary. These guys have really bought into the program culture we’ve tried to develop these last few years.”

In the hot 11-4 start, Florey has been key for the Wolfpack. He was on fire out of the gate against Highland Park, drilling 3 3-pointers and dishing off to Kolby Gilles (5 points, 4 rebounds) for a basket inside.

Highland Park made its inevitable charge back into the game. The Giants rattled off an extended 21-6 run, including a scoreless stretch of 7:48 for St. Ignatius, to go up 25-24 midway through the third.

But, Florey and the Wolfpack had an emphatic answer.

Florey drilled a wing 3 on a pass from senior Luke Collins and added another from the top of the key on a Derek Dingens assist as the Wolfpack regained control for good. Junior Parker Higginbottom also added a late 3 in the third.

Monroe continues to be impressed by Florey’s contributions.

“We can always look to him to make the right play in pressure situations,” Monroe said. “He can hit an open shot, make a nice pass or just telling a teammate the right place to go. Daniel’s been a tremendous leader.”

Florey added another 3-pointer, his sixth of the game, and swished 2 free throws in the fourth quarter to seal the win.

Florey said the Wolfpack is consistently clicking this season.

“We might have gotten on each other and withered under the pressure in the past,” Florey said. “This team has such a good chemistry. Coach Monroe took some timeouts; we talked, and I knew we’d be fine as long as we stayed composed.”

Higginbottom finished with 9 points for the Wolfpack.

Collins (2 points, 7 rebounds) said his team can win in a variety of ways, whether it be high-scoring shootouts or grind-it-out affairs.

“It’s that will to win,” Collins said. “We don’t care who scores or who does well as long as we win at the end of the day. It’s a different feel, a different team, and we’re happy about that. We can adjust and put ourselves in the best position to win.”