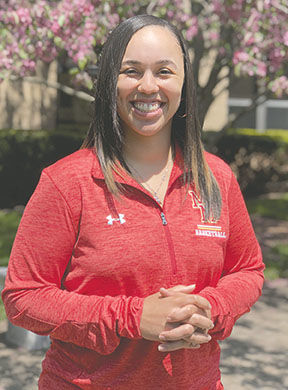 Keisha Newell has been named the varsity basketball coach at Mother McAuley. In 4 seasons at Roosevelt University, Newell led the Lakers to a 59-62 record. She is a Marian Catholic and Loyola University-Chicago graduate. (Photo courtesy of Mother McAuley) 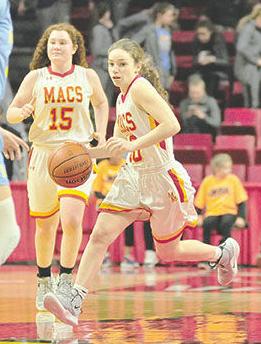 Senior guard Jenna Badali will be a talented player to build the program around for Coach Keisha Newell in her first season at Mother McAuley. Badali averaged 15.4 points for the Mighty Macs as a junior. (Review file photo)

Keisha Newell has been named the varsity basketball coach at Mother McAuley. In 4 seasons at Roosevelt University, Newell led the Lakers to a 59-62 record. She is a Marian Catholic and Loyola University-Chicago graduate. (Photo courtesy of Mother McAuley)

Senior guard Jenna Badali will be a talented player to build the program around for Coach Keisha Newell in her first season at Mother McAuley. Badali averaged 15.4 points for the Mighty Macs as a junior. (Review file photo)

Walking into the gym at Mother McAuley High School, Keisha Newell knew almost immediately this was the place for her.

It wasn’t an all-out practice or even an empty, cavernous gym. The place was packed as the Mighty Macs student body sent the water polo and track and field teams off to state in early May.

She just tried to take it all in.

Newell was named the new Mother McAuley varsity basketball coach on May 22 and started the job on June 3.

“I’d been here before for games, but they brought me in for that pep rally. The excitement in the building was amazing,” Newell said. “The excitement is here. I’m a competitive person, so expectations are high. I want to win everything I touch.”

A Marian Catholic High School and Loyola University-Chicago graduate, Newell comes to McAuley from Roosevelt University. Over 4 seasons, she led the Lakers to a 59-62 record, including a 16-14 mark this past season.

As for the transition from the collegiate level to high school, Newell doesn’t see many differences.

Newell will also be an assistant athletic director.

“Things are run similarly to a small college athletic program,” Newell said. “The athletic director side will be a challenge, a new thing for me, but once I stepped foot at McAuley, I liked it. The culture here, the young ladies have fun and enjoy themselves.”

Clanton resigned this spring after seven seasons with the Mighty Macs to take the head coaching position at Norcross High School in Georgia.

Newell played at Loyola when Clanton was an assistant with the Ramblers.

When Clanton decided she was leaving, she reached out to her former player.

“It was super random. Ashley reached out to me, and she was someone I trusted,” Newell said. “She asked me to check it out. When I did, McAuley was a really good fit.”

In seven seasons, Clanton went 152-68, including a run to the Class 4A state championship game last winter. The Mighty Macs (34-3) finished as state runner-up, losing to Maine West.

For Newell, a skilled point guard at Marian and Loyola, getting hired for a head coaching spot at Roosevelt was a huge step.

The goal immediately was to help put her personal stamp on the program.

“You learn to do things the right way. I’ve had good experiences and not-so-good experiences, so you learn from them,” Newell said. “You set the tone for yourself, the team and the staff, building and cultivating relationships. That’s bigger than basketball.”

Although the Mighty Macs lose four starters, leading scorer Jenna Badali is back to help lead the way, along with sophomore Bella Finnegan and a young talented core looking to pick up experience.

Newell has been impressed by early summer workouts.

“The toughness, McAuley basketball embodies that across the board,” Newell said. “You don’t have to motivate these kids to work hard. You can focus on the Xs and Os. We’ll defend well and rebound, and we’ll be running a little.”

Badali is ready for everything that Newell can throw at the team as she prepares for her senior season. In May, Badali committed to Lewis University.

“Coach Newell has a plan for what we’re able to do,” Badali said. “Hopefully, we can execute it and have a successful season. As the summer goes on, we’ll have the new terminology down and have it in our right pocket. We’re doing a good job adjusting.”

Newell said she can’t wait for that first jump ball in November.

“The team sport is something I always enjoy,” Newell said. “It’s putting individuals on the court and working together, figuring things out. Teams that have great talent don’t always work out. It’s figuring that out and making people better.”