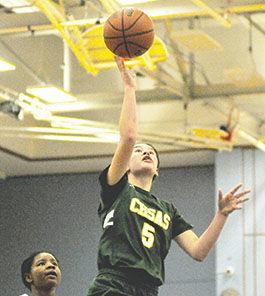 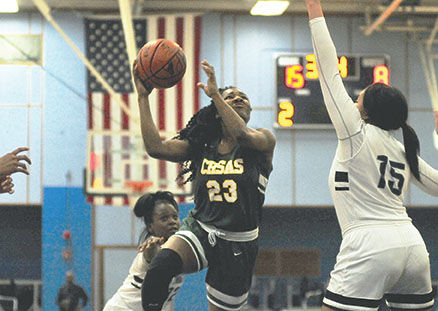 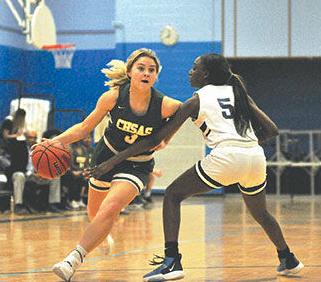 Junior guard Britni Reardon scored 8 points for the Cyclones in a league road game with the title on the line. (Review photo)

Junior guard Britni Reardon scored 8 points for the Cyclones in a league road game with the title on the line. (Review photo)

With the league title on the line, the Chicago High School for Agricultural Sciences (CHSAS) girls basketball team endured a first half to forget.

However, in the second half, the Cyclones didn’t give up.

Rallying for an impressive second half, CHSAS pushed host Hyde Park to the brink, but it could not get over the top in a tough 63-58 loss on Jan. 22 in Chicago Public League Southwest White action.

“We could have given up, but we pushed through and came back from a big deficit,” said sophomore Izzy Horkavy. “We pushed really hard. We just have to start off better next time. If we start off like we played in the second, we would have won.”

Undone by missed layups and waves of turnovers against Hyde Park’s press, CHSAS found itself facing a 37-19 halftime deficit. Early in the third quarter, the Cyclones trailed by 22 points.

“We were rushing. We had to slow down a little bit,” Tyler said. “With the score, we were going too fast where you feel like you’ve got to hurry up and score more points. We needed to slow down and run our plays.”

Horkavy (Mt. Greenwood) was especially a force as the sophomore guard piled up 11 points in the fourth quarter. She had 15 overall in the second half.

A Horkavy putback on a fast break and a Tyler steal and fast break brought CHSAS to within a score at 53-51 with 3:15 remaining.

“We talked about not letting their pressure and loud bench get to us,” Horkavy said. “We had to focus on our game and playing our game.”

Although within striking distance, the Cyclones got no closer than 2 points. A late Maxey score cut Hyde Park’s lead to 61-58 with 22 seconds left in the game, but the Thunderbirds scored in the closing seconds before CHSAS could execute an intentional foul.

CHSAS finished with 27 turnovers and shot 5 for 12 at the free-throw line. The Cyclones outscored Hyde Park 39-26 in the second half.

“We talked about mini-goals, and that really helped,” said Mulchrone-Griffin. “I told them after the game that they can play with anybody. It’s all about not getting down early.”

With a young roster featuring only two seniors, the Cyclones have taken some big steps forward in Mulchrone-Griffin’s second year coaching.

The struggles of the 2018-19 season have provided big dividends for the young team.

“We’ve got more team chemistry. This year, it’s basically the same team returning as last year,” Horkavy said. “We all know each other. We’ve got to look forward and keep our heads up. That will help us pull off more wins.”

CHSAS played at Morgan Park on Jan. 28, after press time, in the opening round of the city playoffs.

“We always talk about being an option for each other as teammates,” Mulchrone-Griffin said. “Everyone’s playing fearless now. They have each other’s backs.”