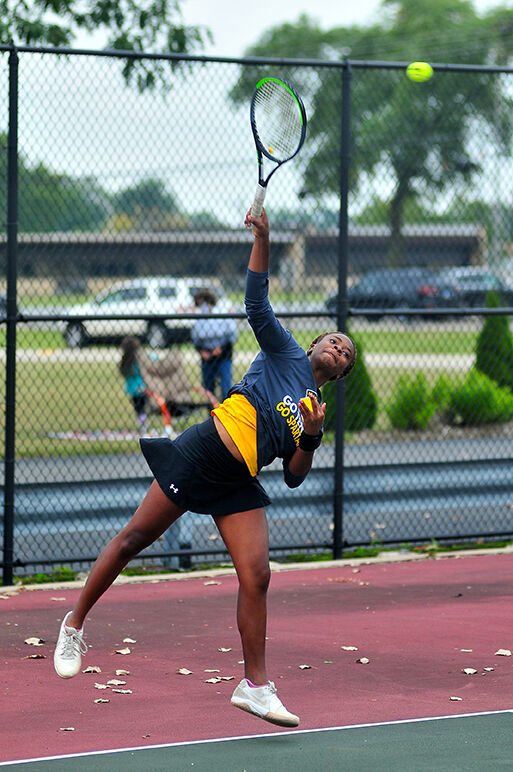 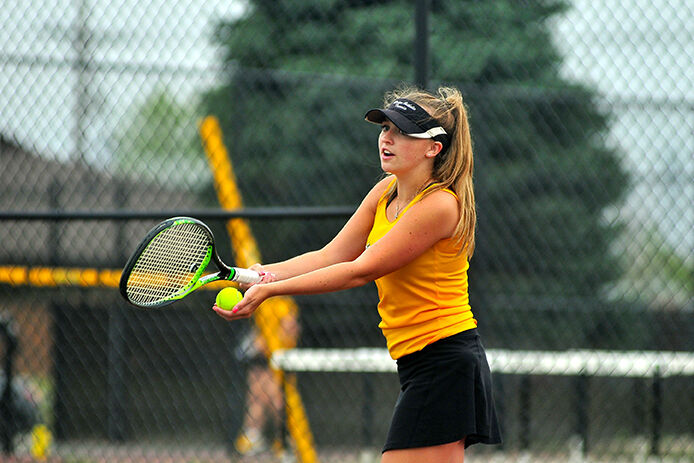 Senior Lilli Hansen prepares to serve against St. Laurence. Hansen teamed up with Samantha Brassel for a win at No.-1 doubles in the nonconference dual. (Review photo) 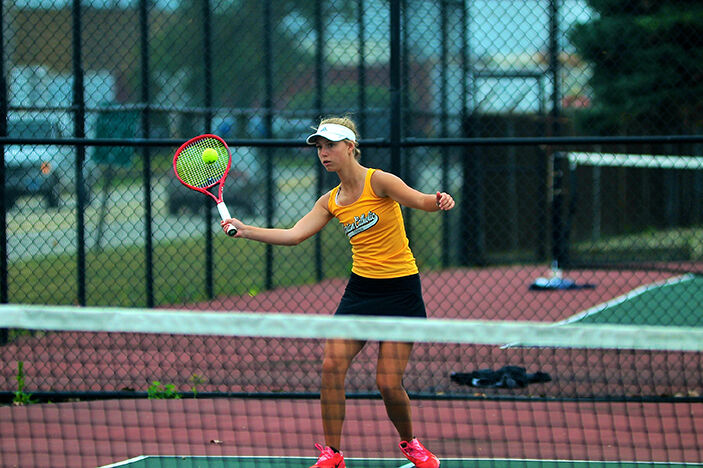 Senior Taylor Trojan returns a shot during her 6-1, 6-1 victory at No.-1 singles for Marian Catholic. (Review photo)

Senior Lilli Hansen prepares to serve against St. Laurence. Hansen teamed up with Samantha Brassel for a win at No.-1 doubles in the nonconference dual. (Review photo)

Senior Taylor Trojan returns a shot during her 6-1, 6-1 victory at No.-1 singles for Marian Catholic. (Review photo)

Marian Catholic senior Samantha Brassel joked with her doubles partner, Lilli Hansen, as they walked off the court.

In this match, her serve just wasn’t cooperating, and some of her shots were blasted way past the baseline.

But, Brassel and Hansen won. More importantly, Brassel was playing tennis again after missing her junior year with a wrist injury.

Brassel and Hansen, both seniors, won 6-0, 6-1 over St. Laurence’s Ruby Olmos and Angelina Juarez as Marian Catholic defeated the host Vikings 5-0 on Sept. 9 in a nonconference dual.

As a sophomore, Brassel won three matches at the Class 1A state meet, advancing to the fourth round of the consolation bracket.

However, her junior year was not to be as she was forced to sit out with a strained tendon in her left wrist.

“It was just hitting a lot, and I strained a tendon. June 2019 through December 2019, the pain didn’t stop, so I wasn’t able to play,” Brassel said. “I did therapy, and that didn’t work. It was a lot of icing the wrist and wearing a brace. It helped. It feels better.”

Brassel finally returned to a court this winter only to see her comeback this spring slowed by the coronavirus.

Unable to play throughout the spring, she made her return, again, in June.

Back on a tennis court, she had to re-learn the fundamentals of the game, starting over with all tennis’ basics.

“It was bad [before I sat out]. It messed up everything. Every time I hit a ball, I couldn’t hit the ball how I wanted to,” Brassel said. “When I got back to practice, the wrist was still sore, but I was icing it every day. I’m feeling better.”

Brassel, Hansen and Taylor Trojan give the Spartans three talented seniors to lead the team through a turbulent 2020.

A few dual meets into the season, Coach Scott Bodnar switched things up, pairing Brassel and Hansen together at No. 1 doubles.

Hansen is a two-time state qualifier as a doubles player.

“They are a strong pair that strengthens our lineup,” Bodnar said. “This then allows for a stronger No.-2 doubles with Karina Bonilla and Dorian Durning. It provides balance to the team lineup even though Sam and Lilli could also play No. 1 and 2 singles.”

Brassel and Hansen have won matches against St. Laurence and Chicago Christian but lost a close three-set match against conference foe St. Viator.

The doubles pairing came together quickly without much practice time.

“Our first match was against St. Viator. They’re a good team,” Hansen said. “We practiced 10 minutes the day before. It was kind of our first time playing together. It was a rough first set, but after that it went really well.”

Hansen battled through a wrist injury as a junior. She underwent surgery this past June to repair a nerve that was being compressed in her elbow.

The doubles pairing has worked well through the early goings.

Hansen credited both players’ calm demeanor on the court.

“Sam is a really relaxed player. She doesn’t get angry when she misses a shot,” Hansen said. “I’m like that. I want to win, but I’m not going to scream during a match. We work well together. If we mess up, the other player doesn’t get mad.”

Brassel grew up playing singles, so she is adjusting and improving on the fly as she forges her doubles partnership with Hansen.

“This is my first time getting that doubles experience,” Brassel said. “In college, you’re not just going to play singles or doubles. I said ‘I’ll give it a try.’ I think I’m a good player to play doubles with. I can help, and I can learn from my partner.”