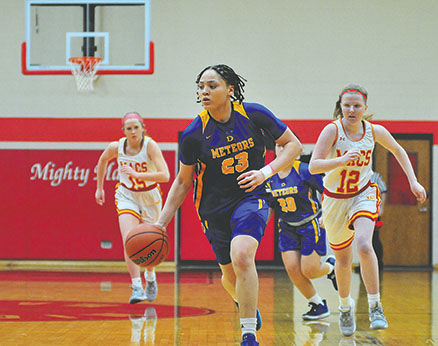 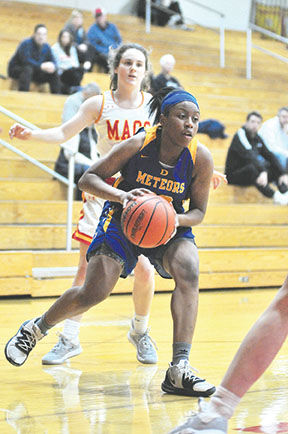 Junior forward Janiece Dawson has been a steadying force for a De La Salle team with only one senior on the roster. (Review file photo)

Junior forward Janiece Dawson has been a steadying force for a De La Salle team with only one senior on the roster. (Review file photo)

De La Salle junior guard TaKiya “TK” Howard headed into the Feb. 5 game against Butler Prep just like any other.

Even though the Meteors came up just short at 44-43 in the overtime affair, for Howard, it was a milestone.

But, she didn’t realize that until after the game.

Howard hit an early wing 3-pointer, which put her over the 1,000 career-points mark for De La Salle.

Howard, a Beverly resident, is a three-year varsity starter.

With only one senior on the roster, a young Meteors squad has worked consistently to develop over a long season. Howard said she’s dedicated to embracing a leadership role.

“My freshman and sophomore years, it was score the ball,” she said. “Junior and senior year, now it’s more of a floor general. I have to control the court and help so other teammates can score. I can’t just score. I have to do the little things.”

“You’ve only got four years in high school, so why not make it last?” Howard said. “I have goals I want to achieve, and my teammates and coaches really help me get there.”

Host De La Salle will open the state playoffs on Feb. 18 against Noble/UIC in a Class 3A regional semifinal matchup.

“We’re still learning and getting it together,” Smith said. “It’s been up and down, but most of our losses, we need to finish. We’re trying to decide who will be the closer for us down the stretch. That’s what we’re trying to lock in for the playoffs.”