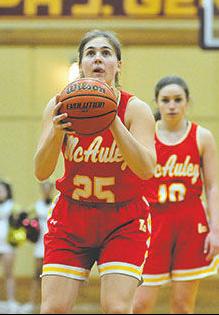 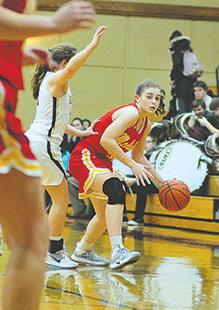 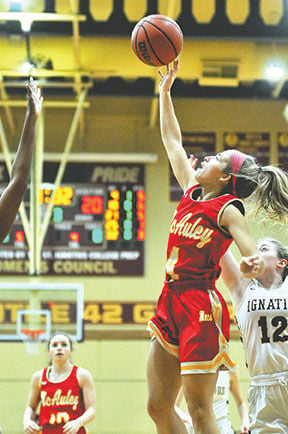 Senior guard Alexis Mayer puts up a baseline floater. She finished with 6 points and 3 assists for McAuley. (Review photo)

Senior guard Alexis Mayer puts up a baseline floater. She finished with 6 points and 3 assists for McAuley. (Review photo)

Sitting the bench behind an uber-talented senior class a year ago, Mother McAuley forward Janie Ternes knew that her time would come and she would be ready.

She showed that on Jan. 24 at St. Ignatius as she converted a 3-point play and drilled 2 free throws as part of a quick 5-0 run that put Mother McAuley up for good in the fourth quarter for a 46-38 road victory.

“It wasn’t too bad sitting last year. The players we had, those seniors, we knew they were going to go in and play,” Ternes said. “We knew that we would have our senior year to go in, step up and show what we have.”

McAuley led by 8 points early in the third only to see St. Ignatius race back and claim a 34-33 advantage after a free throw from Ada Taute.

Ternes answered at the other end, drawing contact on a baseline drive off a Badali pass. She hit the free throw as well.

A little over a minute later, Ternes connected on 2 free throws.

Continuing to make the most of her role as a starter, Ternes has been a solid weapon on offense and defense for the Mighty Macs.

“It’s staying calm and looking for the open shot when it’s there,” Ternes said. “When Jenna passed me the ball, I felt like I was open to get the shot. Working in practice last year with [Grace Hynes] and the girls, you get better. They did a great job teaching us what to do.”

Hynes is in her freshman season at the University of Chicago.

While Badali took care of business at the charity stripe, Barrett delivered with a huge play at the other end.

With St. Ignatius junior guard Lauren McDonald driving hard to the basket, Barrett stepped in under the basket and drew the charge with 18 seconds remaining.

Barrett and the Macs have displayed an uncanny ability this season to draw an unglamorous charge at key moments.

“You’ve got to do what’s best for the team, even if it doesn’t show up in stats,” Barrett said. “As long as we get the ball back that possession and stop them offensively, that’s what is best. It happens so fast that all you can do is let it happen. You hope you get the call.”

Badali is the lone returning starter from last season’s Class 4A runner-up squad, but as a new starting five keeps finding their way, the Macs know their defense will be there.

“It’s starting off strong and really sticking together,” Barrett said. “We lift each other up if you have a bad possession. We work together and talk on defense. That’s our strength defensively.”

Badali, Barrett and Ternes all attended St. Catherine of Alexandria Elementary School in Oak Lawn and have been teammates since fourth grade.

“It’s pretty nice to have, especially with the [younger] Catherine’s girls on the team,” Ternes said. “It makes us closer. We all know our strengths and weaknesses.”