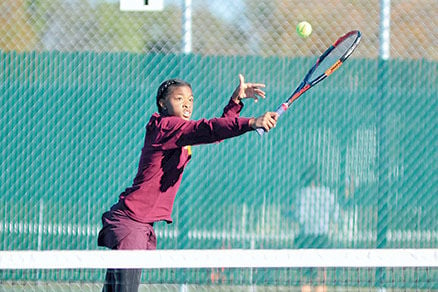 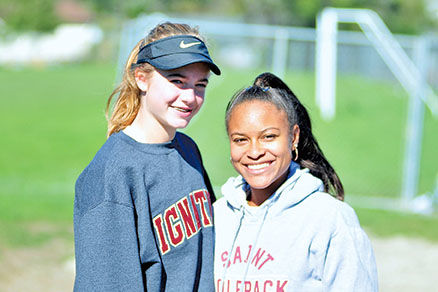 The St. Ignatius doubles team of freshman Helena Cilella (left) and junior Ivvy Hicks won 2 matches at the state tournament before losing in the third round of the consolation bracket. (Review photo)

The St. Ignatius doubles team of freshman Helena Cilella (left) and junior Ivvy Hicks won 2 matches at the state tournament before losing in the third round of the consolation bracket. (Review photo)

Tyra Richardson enjoyed a successful tennis season this year, but with the seedings for the state tournament approaching, the St. Ignatius sophomore wasn’t sure where she’d end up.

However, she was sure of one thing: wherever and whatever the seed, she would be gunning for the state title.

Earning a 3-4 seed, Richardson strung together a dominant three-day run at state, going 5-1 and winning third place in Class 2A.

The third-place finish is the best in St. Ignatius girls tennis history.

“The 3-4 seed, I was surprised, but I wasn’t surprised,” Richardson said. “I worked really hard this season, so I think I earned the seed. I feel more confident [at state] knowing I’m used to it. This year, there was so much more confidence.”

After losing to top-seeded Kiley Rabjohns of Lake Forest on Oct. 19 in the semifinals, Richardson regrouped with a convincing 6-4, 6-2 victory on Oct. 20 at Hersey High School against Rockford Auburn’s Belen Nevenhoven.

“I’m playing more aggressive this year and not waiting for the point to come to me,” Richardson said. “I’m trying to create more opportunities for myself during a point.”

With Richardson winning 5 matches and the doubles team of Ivvy Hicks and Helena Cilella winning 2 matches, St. Ignatius finished eighth in Class 2A with 14 points.

For the talented Richardson, she knew her game was on.

“If I’m staying consistent hitting and moving my feet, I know it,” Richardson said. “I feel good and just know I’m playing well. You feel it. I’m confident with my game.”

A two-time state qualifier as a singles player, Hicks opted to play doubles this season. In singles, she had won a combined 5 matches at state.

Pairing up with Cilella, a freshman, early in the year, the duo was off to the races at state.

“We played pretty well and stayed aggressive,” Hicks said. “We start making our own shots, and we get that rhythm going. Helena sets me up for some great shots.”

Hicks and Cilella advanced to the third round of the consolation bracket, losing to Glenbrook South’s Erika Patow and Elizabeth Hoo.

Cilella said her season improved quickly after a slow start.

“Playing doubles, it’s different,” Cilella said. “The volleys, the ground strokes, staying on the baseline, I started off a little slower this year. It was a good switch from singles to doubles.”