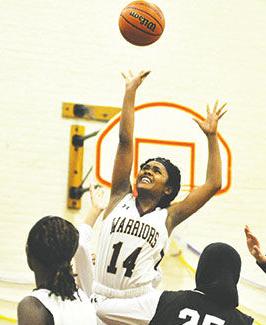 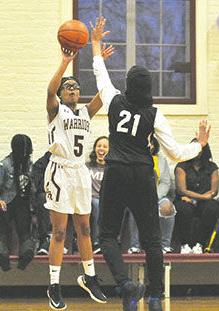 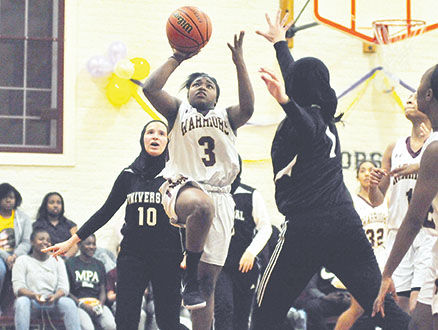 Kaitlyn Mullings wasn’t focusing too much on the festivities for Senior Night on Jan. 31 at Morgan Park Academy (MPA).

Instead, the senior forward was thinking about her teammates and their season goals, especially with the playoffs approaching.

Nonetheless, Mullings, a four-year varsity player, didn’t want to overlook Senior Night, and she scored 18 points and added 8 rebounds to help MPA to a convincing 75-27 nonconference victory over Universal.

“It was definitely bittersweet. I’ve loved playing basketball here the last four years,” Mullings said. “Of course it’s sad that the season is coming to an end, but it’s exciting the team gets to celebrate and my whole family comes out.”

Mullings is a Beverly resident and Kellogg Elementary School graduate.

Mullings and Harris are the only seniors on the roster of eight players.

For Samaria Harris, the win was a welcome relief after the Warriors lost to the Chicago High School for Agricultural Sciences the day before as a result of inconsistent shooting.

“I was looking forward to Senior Night, but I had a tough game yesterday. It put me in a mood where today was going to be an iffy game,” Harris said. “I told myself to keep shooting. I wanted to stay positive because that’s what today is all about.”

The Universal win was never in doubt as MPA raced out to an 18-6 lead through the first quarter with Samaria Harris and Mullings scoring 6 points each and White adding 5.

MPA wraps up the regular season this week and will begin its Class 1A state playoffs on Feb. 11. The No.-1 seed in a sub-sectional at the Collins Academy sectional, the Warriors will host a regional tourney and play the winner of Our Lady of Tepeyac/Tilden.

Looking to snap a regional title drought, Mullings said, the team is ready for the challenge.

“Once we saw the type of players we had this year, we realized we could really win that regional,” Mullings said. “We’ve been thinking about it since day one. We’ve been determined to win it.”

MPA last won a regional in 2013-14 and saw its season end the last two years with a defeat in its regional championship game.

Samaria Harris said the team is capable of winning this year.

“We have to keep coming into practice with a level-headed mindset,” Harris said. “We can’t play around. We have to stay focused on what we want to do. We want another banner on the wall, so we’re ready for the regional and ready to play.”

Both seniors are still deciding where they will attend college; but Mullings hopes to major in educational policy, and Harris plans to major in kinesiology.