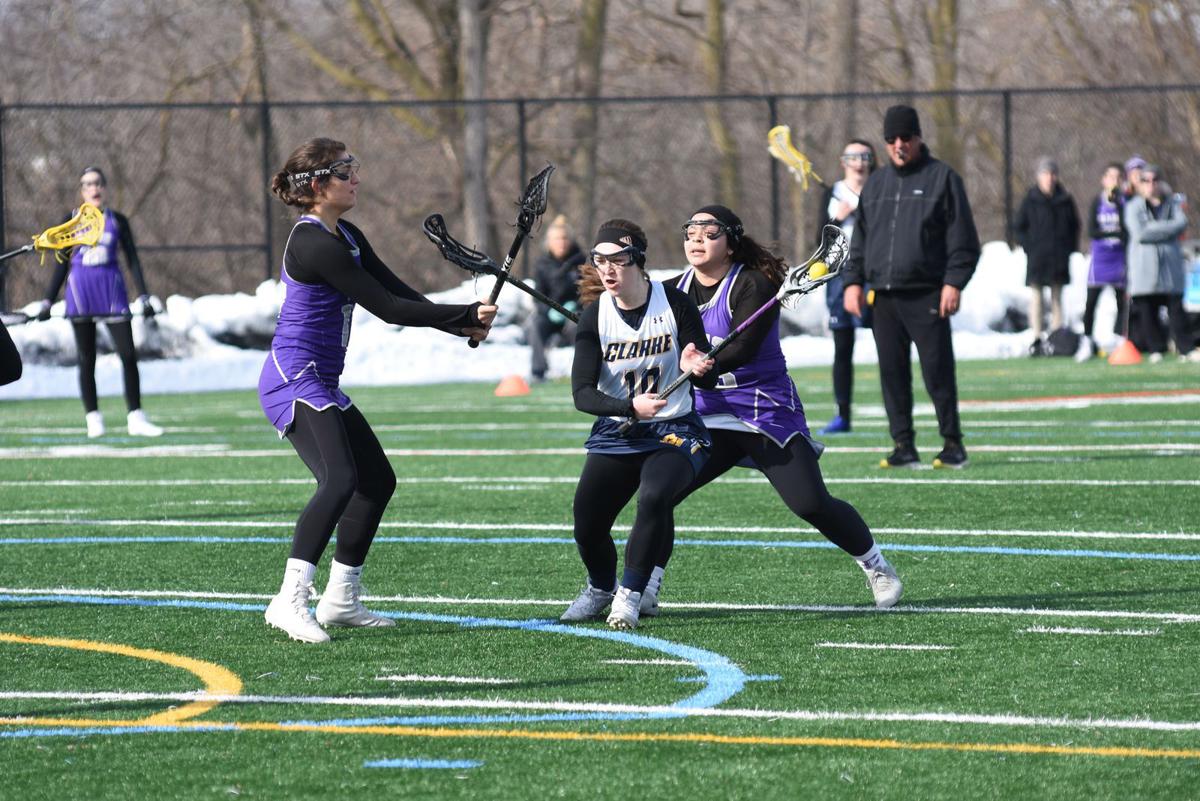 Marist grad Gabby Moran (10) played only one game of her senior season at Clarke University before COVID-19 shut down spring sports. (photo courtesy of Clarke Athletics) 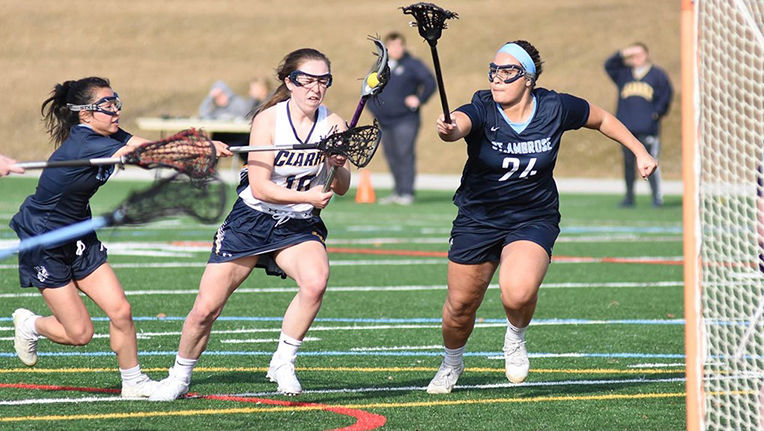 In a breakout junior season for Clarke, Morgan Park resident Gabby Moran piled up 69 goals and 12 assists in 13 games. She finished her collegiate career with 144 goals. (photo courtesy of Clarke Athletics)

Marist grad Gabby Moran (10) played only one game of her senior season at Clarke University before COVID-19 shut down spring sports. (photo courtesy of Clarke Athletics)

In a breakout junior season for Clarke, Morgan Park resident Gabby Moran piled up 69 goals and 12 assists in 13 games. She finished her collegiate career with 144 goals. (photo courtesy of Clarke Athletics)

It was late winter in Gabby Moran’s freshman year at Marist.

Spring sports were fast approaching, and Gabby’s dad, Joe, brought up the idea of her going out for the lacrosse team.

“I’d been playing basketball since I was in third grade,” she said. “Carrying a stick and running around at the same time, I didn’t know if I wanted to do that or could do it.”

Fast forward to her sophomore year, and Moran’s opinion had changed.

“I didn’t play freshman year, but a friend of mine said I should go out for the team,” Moran said. “So, the day before the first practice, I tell my dad I want to play lacrosse. He went out and bought me a stick. I didn’t look back.”

That was the start of a standout lacrosse career for Moran, a Morgan Park resident and recent graduate of Clarke University in Dubuque, Iowa. She played lacrosse and played on the women’s basketball team.

However, like countless athletes across the country, Moran lost her senior season due to COVID-19.

Clarke’s women’s lacrosse team did play one game, a tough 9-7 defeat to Cornell (Iowa) in late February, before the National Association of Intercollegiate Athletics (NAIA) canceled its spring seasons due to the pandemic.

“We were pretty excited about the season,” Moran said. “We had a new coach coming in, a good group of freshmen, and we were excited to see how we’d all mesh with them. It was pretty sad not to see it happen.”

Prepping for the remainder of the team’s schedule, one that wasn’t to be, the Pride kept practicing after its first match. As news about the spread of the virus grew in early to mid-March, Moran and her teammates knew there was nothing they could do in the short term other than to keep working.

“We had all heard about the virus, but at that point, no one knew how serious it was,” Moran said. “We were still allowed to practice in early March, so we worked our butts off and prepared like the season was going to go on.”

The NAIA canceled the spring season on March 16.

Moran ended her collegiate career with 144 goals and 22 assists. As a junior, she was named to the Kansas Collegiate Athletic Conference (KCAC) First Team All-Conference. Moran was also named a Hearst Scholar Athlete with a grade-point average of 3.40 or better.

Moran piled up 69 goals and 12 assists in 13 games in a breakout junior campaign. In the lone game of her senior year, Moran scored 5 goals.

Months since the season was canceled, the loss of the year still stings, but Moran knows the right decision was made.

“Oh yeah, as a senior, it definitely stings. It was going to be a big year,” Moran said. “As a team, we wanted to try for the conference tournament one last time. For myself, I wanted to go for 200 career goals.”

Moran finished her senior year at home this spring, completing her classes with e-learning, ultimately earning a degree in psychology with a minor in biology.

She plans to pursue a master’s degree in speech/language therapy.

Clarke has announced an on-campus graduation for the Class of 2020 on Homecoming weekend in October.

“I’m really looking forward to it. I’m excited it’s on Homecoming week too,” Moran said. “You miss a lot of things closing out your senior year. For my family to be able to be there, to see my friends, that’s pretty cool.”

Of course, Moran’s time at Clarke isn’t done just yet.

Her younger sister, Emily, is an incoming freshman at Clarke. She will also be playing for the Pride’s women’s lacrosse team. Emily graduated from Marist this spring.

Gabby said Clarke will be a good fit for her sister.

Moran considered returning to Clarke after the NAIA granted student-athletes an extra year of eligibility, but she opted to graduate and move on to the next stage of her life.

“I talked about it with my parents. We did think how fun it would be for the Moran sisters to tear it up together,” Gabby said with a laugh. “I just didn’t have any other classes I needed to take.”

Still, Gabby knows lacrosse will remain in her life.

“There are some leagues, some clubs out there,” Moran said. “I’d like to go into coaching, teaching shooting and passing, working with my sisters [Emily and Sara]. Lacrosse has been a big part of my life for a while. It still will be.”