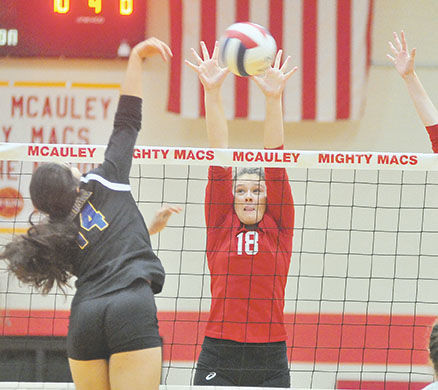 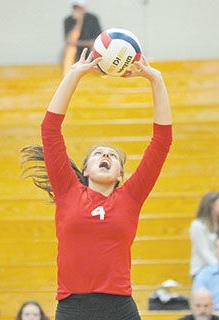 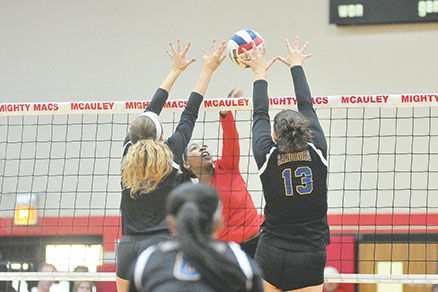 Ella O’Neill has always been a middle blocker.

But for the 6’0” junior, she’ll swing away wherever it helps the team.

“It’s not too tough moving to right side,” O’Neill said. “I mostly play middle, but it’s wherever is necessary. I’ll play wherever the team needs me.”

The middle blocker position has been one of the strengths for the Mighty Macs early in the year, so with plenty of options at middle, Coach Jen DeJarld felt comfortable moving O’Neill to the right side.

“Ella is more powerful at the middle for us, but she does a great job for us at the right side,” DeJarld said. “We shifted people around, and when you’re losing, you need some changes. I’m really happy with what Ella did tonight.”

The Sandburg loss was the third in a row to start the season for McAuley including defeats to Joliet Catholic and Downers Grove North.

For senior setter Emily Weber (St. Cajetan), there’s no panic setting in. She knows exactly what the Mighty Macs need to clean up.

“It’s the unforced errors,” Weber said. “The first week was rough, but this week we’ve been building. We’re building on positives every game. We’re starting to see it as more of a trend as we limit those unforced errors. At the end of a match, we have to finish.”

Weber finished with 10 assists and 13 digs against Sandburg.

After dominating the first set, the Macs struggled to close out the next 2, leading 16-15 in the second only to see Sandburg close on a 10-5 run.

In the third, a Lexi Warfield service run brought McAuley to within a point at 18-17, but the Eagles rattled off a 7-1 run that included 3 Mac errors against the hard-hitting Sandburg squad.

“We keep breaking down on serves,” DeJarld said. “We’re not winning the serve game. It stems from our passing. I was really pleased with the effort in the first game. That’s the team I’m seeing in practice. We have to learn how to sustain that level.”

Spreading the ball around with a balanced attack, Weber has seen much of the lineup step up and deliver.

“Ella was hitting a slide today instead of a typical right-side set, so that will keep our offense fast,” Weber said “Our middles and right sides have been a big part of the offense.”

O’Neill, LeBel and Owolabi had 3 kills apiece in the first set, and the Mighty Macs smashed 13 kills overall.

“We need more consistency and be able to finish,” O’Neill said. “We play really strong, but then we let the other team go on these long runs. We’ve got to figure out how to keep going, push and finish.”