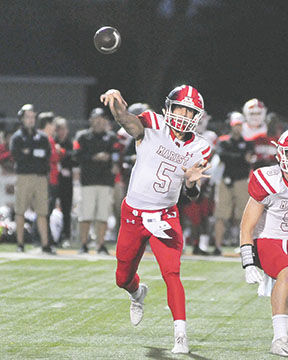 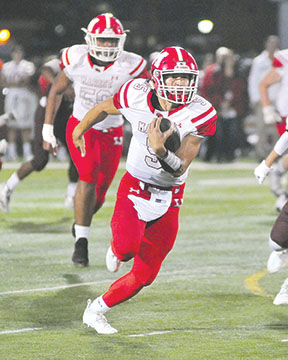 Markett scrambles for yardage. As a senior, he threw for 2,032 yards and 17 TD and rushed for 944 yards and 11 touchdowns. (Review file photo) 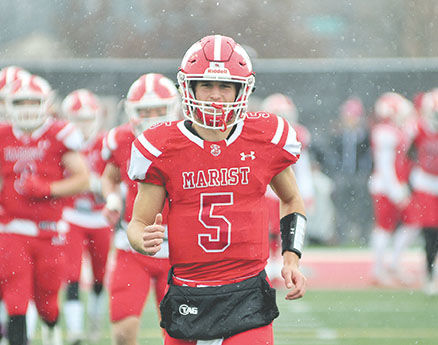 Mike Markett warms up during the Class 8A state semifinal against Br. Rice. Markett started at QB for Marist since midway through his sophomore season. (Review file photo)

Markett scrambles for yardage. As a senior, he threw for 2,032 yards and 17 TD and rushed for 944 yards and 11 touchdowns. (Review file photo)

Mike Markett warms up during the Class 8A state semifinal against Br. Rice. Markett started at QB for Marist since midway through his sophomore season. (Review file photo)

The Marist quarterback was piling up some crazy stats in the air and on the ground as the RedHawks flew through the East Suburban Catholic Conference (ESCC) on their way to a deep run in the state playoffs.

All the while, the recruiting prospects for college developed slowly, but Markett kept at it on the field knowing he would find the right school and football program for him.

“Drake was the first school to give me a shot, to give me an opportunity, and that meant a lot to me,” Markett said. “Recruiting was a longer process where things didn’t develop until later. During the season, I was focused on the team trying to be as successful as we could.”

Drake is a NCAA Division-1 Football Championship Subdivision team. With Markett, the Bulldogs are getting an athletic dual-threat quarterback.

As a senior, the 6’0” signal-caller helped Marist to an 11-2 record and a berth in the Class 8A state semifinals while throwing for 2,032 yards and 17 touchdowns and rushing for 944 yards and 11 touchdowns.

Markett was named ESCC Player of the Year for his huge season.

When he visited the Drake campus last summer, Markett was hooked.

“There weren’t a lot of kids there, so it was more of a football visit,” he said. “Talking with the coaches and staff, I got to meet a few players and had a chance to learn their culture. A lot of it reminded me of the things we do at Marist and how [the culture] is bigger than football.”

Markett took over the starting QB spot at Marist late in his sophomore year.

Developing as a starter, one of his biggest hurdles was shaking off an errant throw or a play that came up just short.

“I was always pretty hard on myself. Sometimes I’d have trouble letting bad plays go,” Markett said. “The coaches would always talk about moving to the next play and keeping a level head. My confidence came along with more experience and more reps.”

In Markett’s senior year, everything clicked.

Marist finished 11-2 with both losses coming to rival Br. Rice. However, with Markett leading an offense that averaged 30 points a game, the RedHawks were a force to be reckoned with in 2018.

According to Markett, a 28-21 conference victory against Notre Dame in Week 3 provided the springboard to the extended run.

“The second half of the game, we all came together as a team and turned it on,” Markett said. “We were playing our game. The feeling after that win was incredible.”

Having Markett at quarterback the last two seasons, Coach Ron Dawczak said he always knew what to expect from his signal-caller.

“Being the QB, Mike was naturally looked at as a leader by his teammates,” Dawczak said. “His calm demeanor and confidence with his intense will to win, it was a perfect combination to have at the position.”

As the RedHawks look to replace Markett for the 2019 season, Dawczak said the quarterbacks in the program learned from the best.

“Mike finished his career never having lost a conference game on any level in four years,” Dawczak said. “He was a proven winner who led by example and provided a great blueprint for what it takes to be successful for all our younger players.”