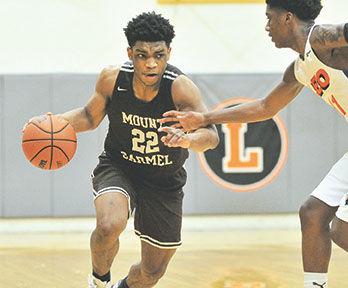 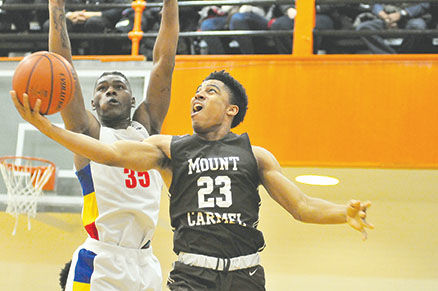 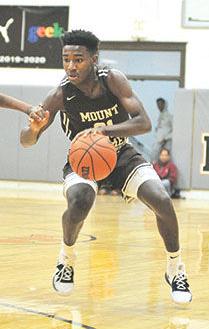 Freshman guard Deandre Craig chipped in with 8 points and 5 rebounds for the Caravan against Leo. (Review photo)

Freshman guard Deandre Craig chipped in with 8 points and 5 rebounds for the Caravan against Leo. (Review photo)

The storyline for a young Mt. Carmel basketball team in the first half of the season proved to be difficult.

A roster with little varsity experience struggled against tough opponents in conference and nonconference games.

However, those early struggles produced worthwhile results in the second half of the season, as witnessed by the Caravan’s 6-game winning streak.

Despite that run ending on Feb. 7 with a 74-59 loss to Leo in a Chicago Catholic League (CCL)-White matchup, Mt. Carmel senior guard Andre Bennett said the Caravan (10-13, 4-7) will continue moving forward.

Bennett poured in 24 points against Leo on the road.

“The first half of the season, we had a really tough schedule and a lot of guys getting used to the varsity speed,” Bennett said. “Now, we’ve got that experience. It’s not an easier schedule, but we’re playing better. The experience has really helped. We’ve had a lot of close games slip away.”

Bennett (Beverly, St. Barnabas) leads the team in scoring this season and has been an all-around force for the Caravan. But, he’s quick to credit his teammates for his success.

“I feel great, but it’s easy playing with a lot of the guys who can do a lot of things,” Bennett said. “My teammates have been playing great. They make me look better. It’s been a team effort.”

Against Leo, Mt. Carmel trailed 18-10 through one quarter but took its only lead of the game on a Bennett wing 3-pointer at the 2:18 mark in the second quarter. The Caravan went up 30-29 on the basket that was set up by Egbuna’s stubbornness in chasing down a rebound.

The Caravan remained within striking distance for much of the second half but could never get over the hump as the Lions pulled away for good with a late 12-4 run.

“We need to box out more and hit the glass. That’s why we let that one slip away,” Bennett said. “We got dominated on the boards. We were playing together as a team and really game-planning well. Our coaches have done a great job giving us a game plan.”

“Tonight, Leo played hard and competed,” Segroves said. “At the end, it got away from us. The score wasn’t quite as wide of a margin as the end score indicates. The guys have stuck together and are believing in themselves. [After a rough start], we turned some things around.”