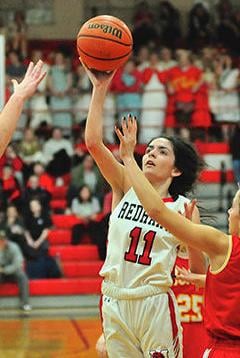 Behind a huge 23-point performance from senior guard Jenna Ryan (Beverly, St. Barnabas), host Marist delivered a dominant 59-31 victory in its rivalry game against Mother McAuley on Jan. 6. The RedHawks had lost to the Mighty Macs the previous two meetings, including a sectional semifinal matchup in 2018. 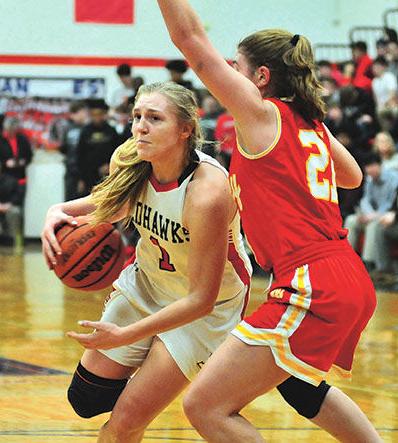 Junior Sydney Affolter drives through the defense to the basket. Affolter finished with 7 points, 16 rebounds, 3 blocks and 3 steals for Marist. (Review photo) 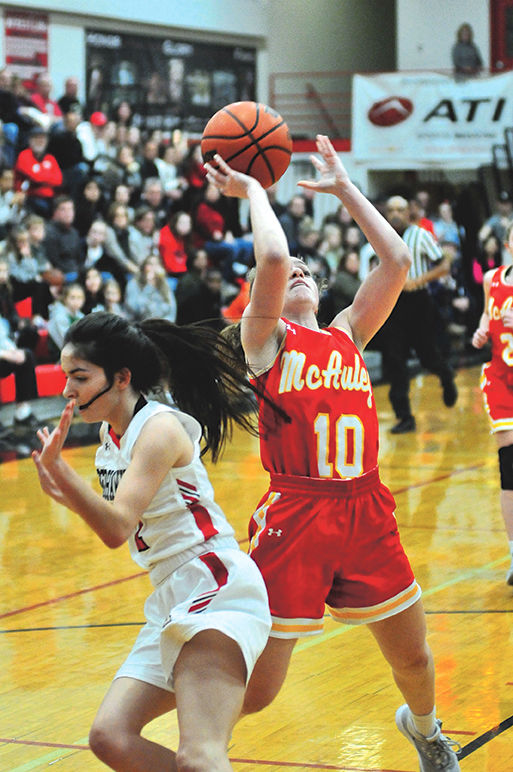 Behind a huge 23-point performance from senior guard Jenna Ryan (Beverly, St. Barnabas), host Marist delivered a dominant 59-31 victory in its rivalry game against Mother McAuley on Jan. 6. The RedHawks had lost to the Mighty Macs the previous two meetings, including a sectional semifinal matchup in 2018.

Junior Sydney Affolter drives through the defense to the basket. Affolter finished with 7 points, 16 rebounds, 3 blocks and 3 steals for Marist. (Review photo)

Jenna Ryan is, first and foremost, always looking to pass for an assist.

The Marist senior guard wants to set up her teammates, zipping a pass through the defense or bombing the ball downcourt on a fast break.

But as she’s shown time and again in her senior season, Ryan is also talented at burning up the nets.

“I love passing. I’d rather pass much more than shoot, but I’ll take [the shot],” Ryan said with a laugh. “We’ve been practicing our shots and free throws so much lately, and I’ve gained more confidence with my shot.”

A late-season varsity call-up as a freshman, Ryan (Beverly, St. Barnabas) has been a staple in the RedHawks’ rotation ever since.

However, in her senior season, she’s taken her game to another level.

“Jenna has stepped up big time for us,” said junior wing Sydney Affolter. “Graduating Abby Callahan and McKenna Kallianis, she knew she’d be needed a lot for us and a key player. She accepted the role and is really putting in the extra work for us.”

Ryan clicked early and often in a huge opening run for Marist, scoring on her patented running floater in the lane and scoring off a steal on a fast break.

With the RedHawks rolling to a 15-2 lead through one quarter, Ryan drilled a wing 3-pointer off a Kira Chivers pass and then set up Chivers for a midrange jumper the next time down to open the second quarter.

Marist led by as many as 21 points in the first half and never looked back.

“The past two years, we’d lost to them. We wanted this one to be ours, our big chance to win,” Ryan said. “We didn’t want them to get on a roll. We had to play better defense and box them out. Then, we run, and we love fast breaks.”

Marist was coming off a dominant championship run at Glenbard West’s Grow the Game tournament, taking down Whitney Young 71-43 on Jan. 4 in the title game. The RedHawks also finished second in a deep field at the State Farm Holiday Classic in Bloomington, Ill., during the Christmas break.

For Affolter, success has come from team-wide contributions.

“The points don’t matter to us,” Affolter said. “There is no selfishness. Whoever has a good game, we’re happy for her. It’s our team chemistry. We’ve never been closer as a group.”

The Mighty Macs struggled to connect from 3-point territory in the first quarter, digging an early hole that became too deep.

“Marist had a little more energy than we did, and that’s on us,” Badali said. “We need to come out with more effort and play better basketball. They wanted it really bad after the last few seasons.”

With McAuley in a bit of a midseason rough patch, Badali said the team can turn things around.

“We’re in a slump right now, but we’ll take a day off and get back to basics and playing hard,” Badali said. “We need to figure a few things out and figure it out quick because the schedule doesn’t get easier.”