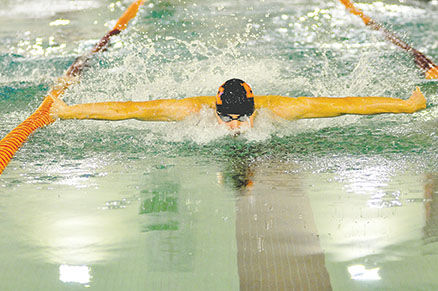 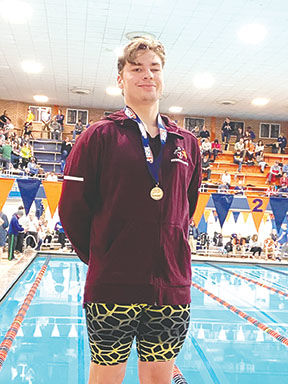 Seth Miller had been there before.

The Br. Rice senior had competed at the state swimming and diving meet and knew what it was like to need a time drop to move up in the standings.

This year, he was ready to make his move.

Seeded third in the championship heat on Feb. 29 at the state meet at Evanston High School, Miller improved in a big way by finishing second in the 100-yard butterfly.

“It’s the technique, hitting the wall, all the little improvements you make,” Miller said. “Swimming [in the championship heat], it’s a different meet. It’s different than the prelims. It’s this great atmosphere, and that ‘This is it!’ feeling. It all clicks.”

His second-place finish was the highest at the state meet for a Br. Rice swimmer since Tony Degrasso finished second in the 50-yard freestyle in 2001. Chris Ulrich won the 100 butterfly in 1987.

Miller wasn’t done with one medal. The Evergreen Park resident also finished eighth in the 100-yard backstroke (50.59 seconds), bringing his career state medal total to three after finishing fourth in the butterfly as a junior.

Although he said not winning the crown was a letdown, Miller is now focused on bigger things to come. The University of Iowa recruit will swim next fall with the Hawkeyes.

“It was a little disappointing that I didn’t finish first,” Miller said. “This is what you train for, but I’m happy with how I performed. I’m not looking at this as the end of anything. I consider it the beginning as I look at swimming at Iowa for the next four years.”

Miller is already back in the water with his club team, the Chicago Wolfpack Aquatic Club, and he will compete with the Wolfpack this spring and summer before heading to Iowa City for his freshman season.

Miller said he’s ready to take on the challenges that await.

“It’s great to know I’ll still be swimming in college. I’ll be swimming in club, too, with swimmers with a lot of ability,” he said. “We’ll definitely see each other swimming in the Big Ten and NCAA. Like I said, this isn’t the end, just the beginning. I want to show what I can do.”

With Early and Miller earning their medals for Br. Rice, the Crusaders were the state runner-up in combined team standings, which include the scores of teams with athletes in both the disability and non-disability races.