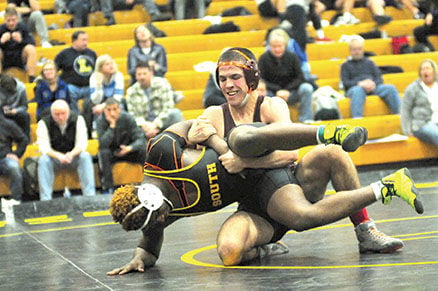 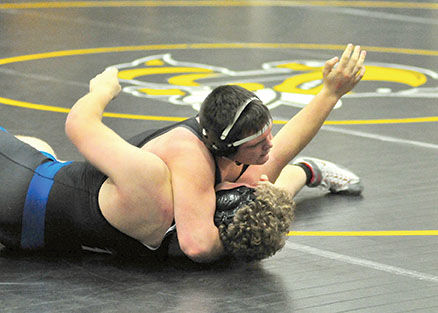 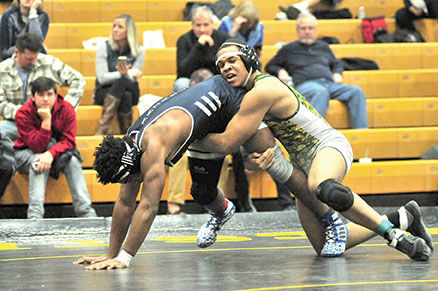 During his varsity career, Br. Rice senior wrestler Dominic Murphy has built an impressive resume with impressive wins and two trips to state.

But with a young Crusaders squad around him this year, Murphy has added another skill to his list of abilities: team leader.

The lone senior of eight Br. Rice wrestlers who advanced to the regional championship or third-place match, Murphy has worked hard to help his younger teammates achieve success.

Murphy won the 170-pound championship on Feb. 2 at the Class-2A Hinsdale South regional. It was Murphy’s third regional title.

“It’s definitely a big job leading them. You want to show them the right way to work,” Murphy said. “Set a good example. The same way we work in the room, we wrestle on the mat. If they’re not doing a good job, I’ve got to do a better one.”

Br. Rice finished fifth in the team standings with 118 points.

Improving to 34-3 on his senior campaign, Murphy (Evergreen Park, Most Holy Redeemer) pinned Hinsdale South’s Jeremiah Kinsey in 1:54 for the title.

The top three finishers in each weight class advanced to the De La Salle sectional on Feb. 9 for a bid to make state.

Also moving on were five other Crusaders.

Watching this young team develop, Murphy said, the pieces are starting to fall into place for Br. Rice.

“The mistakes they were making, they fine-tune things and don’t make the same mistakes anymore,” Murphy said. “It all boils down to basics. Just wrestle; stay in good position, and you’ll win those tough matches.”

Chirillo prevailed with a 15-10 sudden-victory win in an exciting, fast-paced match. Archer qualified for state as a sophomore and was the No.-1 seed in his weight class at Hinsdale South.

“It means a lot to me knowing that I’m a freshman and he’s a junior and a state qualifier,” Chirillo said. “I dug down deep and had it in me to get that overtime win. It feels good.”

Chirillo improved to 12-4 on the season, but he’s not content with that record and is aiming for victory at the state tourney in Champaign.

“It’s match to match, worry about one thing at a time,” Chirillo said. “The plan is to make it to state. I’m doing pretty good. The year’s gone well.”

As Murphy eyes the end of his high school career, he’s knows the regional title is a step in the right direction toward state.

“It’s nice to win, but the big stage is next week, and an even bigger stage is at state,” Murphy said. “This is a steppingstone in working toward the big goal.”

Sean Burns went out for the wrestling team in his freshman season with two goals in mind: let out some aggression and develop his wrestling skills in order to become a better football player.

“Trying wrestling for the first time in practice, I just thought, ‘Wow!’ It was so much fun,” Burns said. “I knew I had to keep doing this. I’m surprised by how far I’ve come with the sport.”

Burns is also a defensive lineman for the Vikings football team.

“Other than cheating, it doesn’t matter what you need to do to win,” Burns said. “You’ve got to put your body on the line. The goal is to get first, but as long as I’m making it to sectionals, I get to wrestle a couple more matches.”

“Especially being a senior, it’s do or die,” he said. “Either you win or you go home. Your high school career is over. That gives you more motivation to go out and get the win. I was able to get the takedown.”

Roa is a four-year varsity wrestler for the Vikings.

St. Laurence finished sixth as a team with 97.5 points.

Junior Mikhal Teverbaugh lost to Nazareth’s Robert Gurley in a fall in 4:17 but advanced to the sectional with his second-place finish at 182 pounds.

Chicago Ag School finished eighth as a team with 18 points.