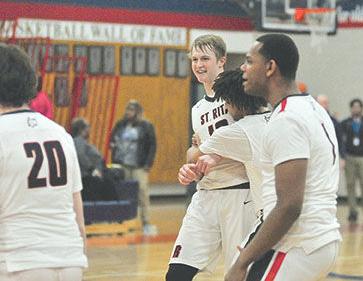 St. Rita senior Connor Serven is mobbed by his teammates after his go-ahead layup with 2.8 seconds remaining. Serven finished with 12 points and 8 rebounds. (Review photo) 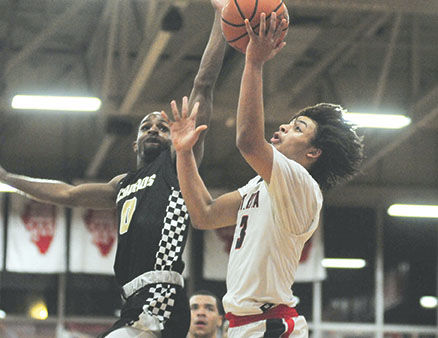 Junior guard Christian Henry puts St. Rita up with a layup in the final minute. Henry scored 18 points for the Mustangs. (Review photo)

St. Rita senior Connor Serven is mobbed by his teammates after his go-ahead layup with 2.8 seconds remaining. Serven finished with 12 points and 8 rebounds. (Review photo)

Junior guard Christian Henry puts St. Rita up with a layup in the final minute. Henry scored 18 points for the Mustangs. (Review photo)

St. Rita senior Connor Serven was ready to foul someone.

The Mustangs were down a point to Richards in the game’s final 10 seconds as the Bulldogs tried to inbounds the ball in the backcourt.

Then, Serven looked over to teammate Kevin Murney.

“I’ve got to give a lot of credit to Kevin. He heard the inbounder say ‘Pop! Pop!’ He gave me that look like ‘Let’s get on him defensively,” Serven said. “We both made the jump when [Richards] got the ball, and I got the steal.”

Double-teaming Richards’ Albert Jones, Murney tipped the ball, and Serven picked it up to lay it in for the game-winner with 2.8 seconds left as host St. Rita prevailed on Feb. 4 with an exciting 64-63 comeback victory.

The Mustangs only led once (62-61) before Serven’s last-second score, trailing by 12 in the first half and 8 in the fourth quarter.

For Murney, a senior, it was an impressive momentum-shifting victory.

“It’s a big win. I didn’t expect it to come down to that, but I’m very happy Connor got that steal and made the layup,” Murney said. “We’ll always keep fighting and sticking together. We’re never totally out of a game.”

To fuel the comeback in the fourth, Henry scored 7 points, and Serven and Murney added 6 points each.

Henry (Vanderpoel) put the Mustangs up at 62-61 on a hard drive to the hoop with 25 seconds left only to see Richards answer at the other end.

Following a St. Rita turnover, it appeared that Richards just needed to dribble the clock out or hit a free throw to preserve the win. But then, Murney and Serven stepped in.

“We were supposed to foul right away, but I knew we could get him to cough it up,” Murney said. “We went against what the coaches said, but it paid off.”

Millender, Murney and Serven have been go-to performers for Coach Roshawn Russell in his first year.

“I can’t say enough about Connor and Kevin. Connor isn’t talked about. He can definitely play at the next level,” Russell said. “Kevin hardly played last year, but he’s been the heart and soul of our team. It doesn’t surprise me he was able to read the play, get his hand on the ball and help us win the game.”

The Richards’ win was St. Rita’s fourth in a row and sixth in seven games as the team improved to 15-9 overall.

Serven said the team has thrived by going out and playing together.

“We’re just playing basketball,” Serven said. “We’re not worrying so much about picture-perfect offense. We’re just doing what we know we can. We’re good with pick and roll, and if we win the rebounding edge, we win every game.”

During pregame activities, St. Rita and Richards honored NBA legend Kobe Bryant with 24.2 seconds of silence, 24 for Bryant’s number and 2 for his daughter, Gianna.

Kobe, Gianna and seven other people died in a helicopter crash on Jan. 26 in California.

Russell grew up a hoops fan in the late 1990s and early 2000s as Kobe took the league by storm. For Russell, Bryant meant much more.

“It still feels unreal. It really took a toll on our team and our staff,” Russell said. “Kobe’s meant a lot to the game, but more than that, he’s motivational to anyone. It was important for us to have a night to celebrate him and everyone involved in the tragic accident.”