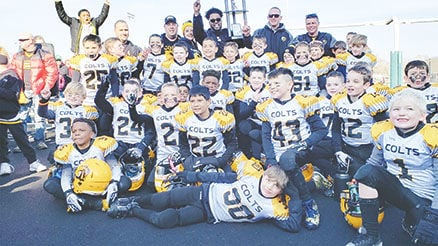 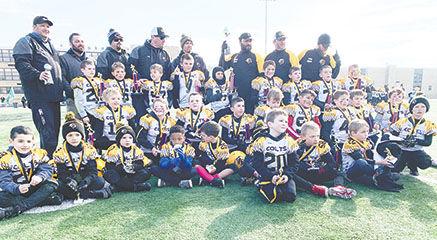 As the Mt. Greenwood Colts peewee team started practice in July, Coach Anthony DePaola knew his roster of third- and fourth-graders had plenty of talent.

The Colts had already enjoyed much success on the football field in recent years, and the goal for the 2019 season would be to continue those achievements.

The Colts accomplished that mission on Nov. 16 at Oak Lawn Community High School when they beat the Blue Island Untouchables 26-12 to win the division’s Super Bowl and wrap up an undefeated season with 11 wins.

“What I think was so special about this team was how close the kids were,” DePaola said. “Most of the boys, this is their fourth year together. They’ve had a lot of success in recent years. We really hit the ground running in July, and we were able to really get ahead of the curve as far as offensive and defensive schemes.”

In the Super Bowl, quarterback Ryan DeAndre got the offense rolling with an early QB keeper for a TD. Near the end of the first half, linebacker James Gregory delivered a huge play at the goal line to prevent an Untouchables score.

The Colts led 13-0 at halftime and held off a late Blue Island charge.

“The kids came out and finished the job,” DePaola said. “We played hard offensively and defensively. Our line played a great game like they have all year, and we ended up pulling it off. We had a perfect season.”

DePaola praised running back Zach Jones for his strong play during the season. Emmett Van Dellen was a key wide receiver for the team, and Gregory was a consistent presence at linebacker for the defense.

“Zach is a great kid with great speed. He really opened up what we were trying to do on offense,” DePaola said. “Emmett, with how good he can catch, really stretched out opposing defenses. James was a consistent tackler and played great all season.”

DePaola said his young team’s ability to learn some complicated football schemes at a quick pace was impressive.

“A lot of teams our age aren’t able to throw the ball,” DePaola said. “Fortunately, we were, and we wanted to use that to our advantage. Defensively, we wanted to keep everything in front of us, containing and not allowing teams to get to the sideline. That was the most important thing.”

The Colts super-peewee team of first- and second-graders defeated Blue Island 20-0 on Nov. 16 at Oak Lawn to win the division’s Super Bowl.

“It’s the best defense I’ve seen with kids this young,” Zapata said. “The first-team defense gave up 2 touchdowns all year, and those were sort of fluke plays. It was all the kids and parents being super supportive of the team. They all responded and stuck together.”

“We ran a wildcat offense where we were able to rotate some guys at quarterback,” Zapata said. “We had 10 guys up front who blocked, too, and they were incredible.”

Zapata said many of his players previously gained valuable experience from playing flag football. After the players learned some football fundamentals in that sport, it was smooth sailing in making the transition to tackle football.

“The big thing is teaching the kids and helping them learn some valuable lessons that hard work pays off and playing the right way,” Zapata said. “From there, we expected to win. It worked out great all season.