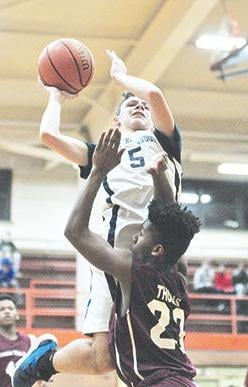 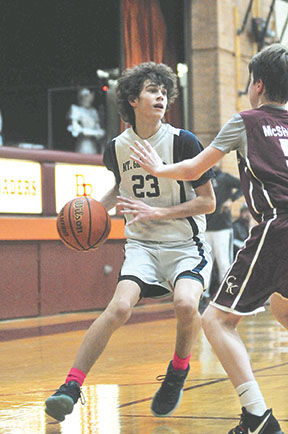 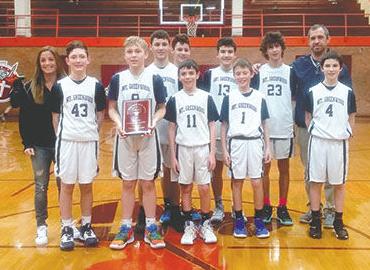 The Mt. Greenwood Elementary seventh-grade team improved to 29-6 with its win over rival Christ the King in the championship game. (Review photo) 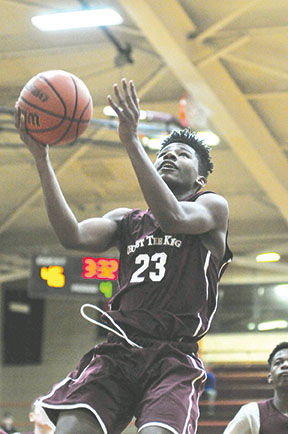 Christ the King forward Cameron Thomas finished with a huge day for the Screaming Eagles, scoring 16 points and pulling down 15 rebounds. (Review photo)

The Mt. Greenwood Elementary seventh-grade team improved to 29-6 with its win over rival Christ the King in the championship game. (Review photo)

Christ the King forward Cameron Thomas finished with a huge day for the Screaming Eagles, scoring 16 points and pulling down 15 rebounds. (Review photo)

Mt. Greenwood Coach Tom Justic knew his seventh-grade team was full of talent and had the potential to compete with the big kids.

So, when the opportunity arose for the Eagles to play in an eighth-grade league and in several eighth-grade tournaments, Justic was confident his team would be ready to battle.

“The early eighth-grade games at the Leo, De La Salle and St. Rita tournaments helped us. Those were really good teams,” Justic said. “We lost a few of them, but we kept everything close. We finished fourth at Leo. We earned every win we got there. That gave them a bunch of confidence.”

The Eagles improved to 29-6, all 6 losses coming to eighth-grade teams.

Against CK, Zach Mikrut (23 points, 7 rebounds) and Max Justic (22 points, 8 rebounds, 6 steals, 6 assists) led the team and were named co-MVP of the tournament.

“The team really wanted to win this tournament. Out of all the tournaments they’ve been in, they always talked about this one,” said Coach Justic. “This one means the most. They know how prestigious it looks for them to win. That’s why this one was so important.”

Unleashing its pressure defense early, Mt. Greenwood was off and running behind Max Justic at the point of the defense. The Eagles led 15-7 through one quarter and 29-16 at halftime.

“Every time CK pushed, we punched back,” Coach Justic said. “We work on those one-on-one drills in practice every day where they have to stop their teammates. They fight, scratch and claw. It carries over into the games. Their defense has gotten way better since last year.”

Mt. Greenwood is playing this season in the South Suburban Basketball League seventh- and eighth-grade divisions.

For the upcoming playoffs, the Eagles will only compete in the seventh-grade.

“It’s a great challenge. The simple answer is that they can handle it,” said Coach Justic. “They have this will to win and challenge themselves. It’s in all of them.”

CK was paced by Cameron Thomas, who finished with a huge performance of 16 points and 15 rebounds.

CK Coach Robert Whittaker liked his team’s effort, especially without two starting guards who missed the game with the flu.

“We were missing two guards, but we played our tails off,” Whittaker said. “I’m proud of them. It was a great run [at the tournament], and it’s a big rivalry for us. They’re really coming together as a team.”

CK figures to be a big player in the upcoming South Suburban and Southside Catholic Conference playoffs, especially with its full lineup.

“We have great chemistry,” Whittaker said. “We’ll be ready. We’ll keep our heads up and keep fighting. This is a scrappy bunch.”