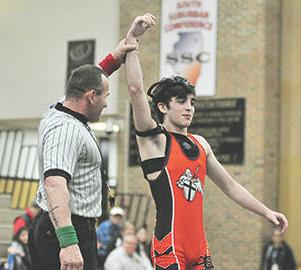 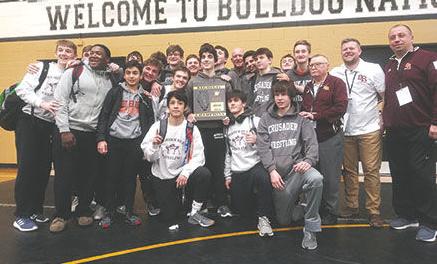 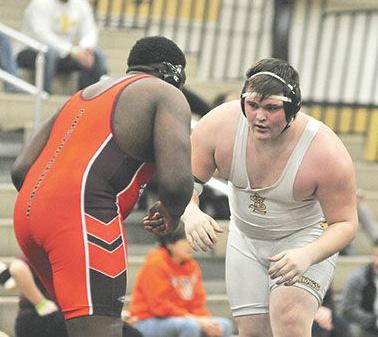 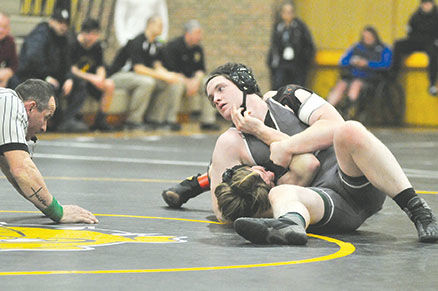 Evergreen Park senior Myles Kerwin wins the 195-pound title with a pin in 1:20. The Mustangs finished third as a team. (Review photo)

Evergreen Park senior Myles Kerwin wins the 195-pound title with a pin in 1:20. The Mustangs finished third as a team. (Review photo)

Michael Loughney joined the Br. Rice wrestling team three years ago as a freshman with no experience in the sport.

A coach had approached him at school about joining the team midseason, and Loughney thought he’d give it a try.

He hit the ground running and hasn’t looked back.

Continuing a solid senior season, Loughney won the 113-pound title on Feb. 8 at the Class 2A Richards regional, and the Crusaders also won the team title to advance to the dual-team sectional.

“I expected to win [individually] and expect to win moving forward, but I was more excited that we won as a team, to be honest,” Loughney said. “We go hard in practice every day all week.”

Br. Rice advanced to the team sectional for the first time since 2017, and senior Tom Crane was especially happy to make some history with his team.

“It does a feel a little different, advancing as an individual and as a team,” Crane said. “I’ve never been to team sectionals before. This is a first time for me. I’m excited to see what we can do, and hopefully, we can get downstate.”

“It’s all the hard work I’ve put in throughout the season and all four years wrestling hard,” Loughney said. “My coaches have helped me a lot the whole way. They’re the best coaches around.”

In the championship match at 160, Crane (Most Holy Redeemer) defeated St. Laurence’s Ryan Carroll with a 14-6 major decision.

With the team title up for grabs heading into the final rounds, Br. Rice defeated St. Laurence in 3 of its 4 head-to-head title matches.

Shaking off some early-season struggles, the Crusaders look to peak at the perfect time.

“We jelled together, and everything fell into place weight-wise,” Crane said. “Everyone stepped it up today and wrestled up to their potential. We did a good job.”

Bennett’s match with Richards’ Rocco Palumbo was the highlight of the meet, an exciting 8-6 decision in overtime. Bennett forced overtime with a late reversal in the third period.

Sean Burns had a junior season to remember a year ago, finishing sixth at the Class 2A state meet at 220 pounds.

He was more than ready for the challenge of his senior season, moving up to heavyweight.

Burns continued his impressive final campaign, winning the title at 285 pounds with a pin in 1:34 over Br. Rice’s Austin Veal.

“This means a lot. I only started wrestling as a freshman,” Burns said. “Even placing last year, it’s the chance of a lifetime. I’m speechless. I placed at state last year, and now I’ve won a regional.”

Burns is also a standout defensive lineman on the football team.

As a junior, Burns didn’t start wrestling until late December as he dropped weight to be eligible at 220.

Bumping up to heavyweight this year, there was no shedding weight. Once the football season ended, Burns quickly transitioned to the wrestling mats.

He uses a quick, aggressive style in his matches, unlike most heavyweights who rely on brute force.

“I know I’m going to have speed on some of these guys at heavier weights,” Burns said. “It’s an advantage I’ve got to take. I need to take any shot I can.”

One of the top-10 ranked heavyweight wrestlers in Class 2A, Burns recently committed as a football player to North Central College in Naperville. North Central is the defending Division III national football champion.