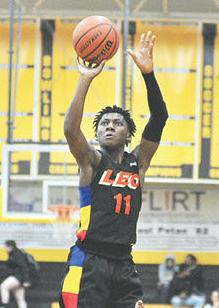 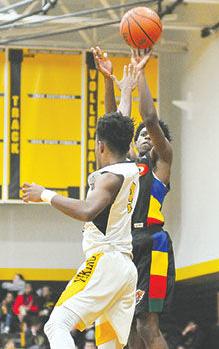 Leo guard LaShaun Glover pulls up for a 3 over the outstretched hand of St. Laurence guard Trey Davis. Glover poured in 19 points for the Lions. (Review photo) 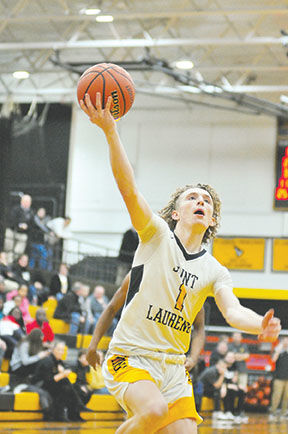 Leo guard LaShaun Glover pulls up for a 3 over the outstretched hand of St. Laurence guard Trey Davis. Glover poured in 19 points for the Lions. (Review photo)

After receiving some advice from Leo Coach Jamal Thompson, junior guard Terrance Ford has taken those words of wisdom to heart.

Ford agreed with his coach that he needed to play more aggressively to help the Lions.

Although Ford might not have been as accepting of advice early in his career, the team leader embraced it.

“Younger me would have been mad,” Ford said with a laugh. “The older I get, I know it’s the truth. I listened to what coach said, watched the film and saw what I could do to help the team.”

Ford delivered a huge performance on Jan. 17, pouring in 25 points, including a late game-tying 3-pointer, as Leo mounted an impressive comeback in a 72-68 overtime victory at St. Laurence in a Chicago Catholic League (CCL) crossover.

Thompson was impressed by his point guard’s response to his urging to be more aggressive.

“I’ve been on him so much the last two weeks because I know what he can do,” Thompson said. “He’s been settling a lot. Me being a point guard myself, guess what, if you want to play at the next level, there are some things you have to correct. Tonight, he did that. It showed.”

Leo trailed almost the entire game and was behind 52-43 early in the fourth.

Glover swished 3 free-throw attempts and drilled a corner 3, and Ford hit 2 3-pointers, including the shot that forced OT with 34 seconds left in the game.

Ford scored 4 points in OT, and Glover got 2 points as Leo squeaked out the win.

“Terrance brings everything,” said Leo senior center Kendale Anderson. “He’s our floor general. He passes the ball to all our teammates. He gets us the ball, and we do our thing. For him and LaShaun, it’s been ‘Let’s go!’”

Anderson finished with 14 points and 10 rebounds for Leo (9-9, 4-4). Junior guard Adarius West added 5 points and 7 rebounds as the Lions battled foul trouble in a physical game.

“That’s a really big win for us,” Ford said. “It all started on the defensive end for us. We couldn’t let the refs get to us. This meant a lot. I told my guys to just keep playing hard.”

McGuire (Beverly, St. Barnabas) chalked up the loss to a tough fourth quarter.

“We made mental errors and some turnovers,” McGuire said. “We were up 10 and weren’t playing our normal game. We took our foot off the gas a little bit and played conservative. We need to keep our foot on the gas.”

St. Laurence remains in the thick of the standings in the deep CCL-Blue, where all eight teams are just three games apart.

“We only have 2 losses. We’re definitely still in it,” McGuire said. “Our record isn’t the best like we wanted it to, but we’ve got to put it behind us. The CCL is still there. That’s one of our goals.”