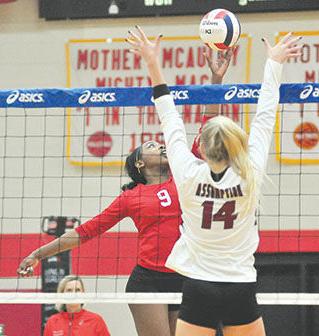 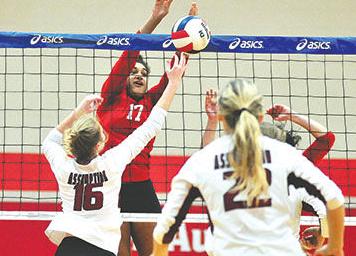 Junior middle Abby Sarich (St. Cajetan) goes up for a block against Assumption. Sarich piled up 4 kills and 7 blocks for the Mighty Macs. (Review photo)

Junior middle Abby Sarich (St. Cajetan) goes up for a block against Assumption. Sarich piled up 4 kills and 7 blocks for the Mighty Macs. (Review photo)

The talent and athletic ability were never in question for Mother McAuley right-side hitter Amia Owolabi.

In her sophomore and junior years on varsity, it was having the confidence to put that talent to good use on every play.

Now, as the Mighty Macs’ opponents are discovering, Owolabi has put it all together at the perfect time.

Ripping 10 kills and powering 3 blocks, Owolabi led host Mother McAuley to a convincing 25-20, 25-21 victory over Assumption (Ky.) in the third-place match of the ASICS Challenge.

“There’s definitely been a difference this year. I’m more aggressive and more confident in myself, especially from last year,” Owolabi said. “This year, I can see myself being a leader, and the team knows they can count on me.”

Mother McAuley improved to 19-7 overall, going 4-1 at ASICS. The Mighty Macs lost to Marist in the semifinals but rebounded in a big way with the Assumption win.

Owolabi was a powerful weapon in both sets, especially in the second as she slammed 3 kills as part of an 11-3 run coming off a 12-all tie.

“We continued to talk, and our movement on the court was there,” Owolabi said. “We executed on the ball and didn’t make too many errors.”

“Amia is not only a go-to hitter; she’s dominating matches,” DeJarld said. “It’s what we always hoped she would be. She’s become an incredible blocker, and her ball handling has been so much better. She’s become a complete player this year.”

Owolabi credited a switch to a new club volleyball team, First Alliance, in the offseason for her increased confidence. She is an Embry-Riddel Aeronautical University recruit.

Since starting the season 0-4, Mother McAuley has clicked to the tune of a 19-3 run, with 2 of the losses coming to rival and two-time defending state champ Marist.

“We don’t focus on the start of the year,” Owolabi said. “We move on. We practice every day on the little key things to make us better. That’s pretty much it.”