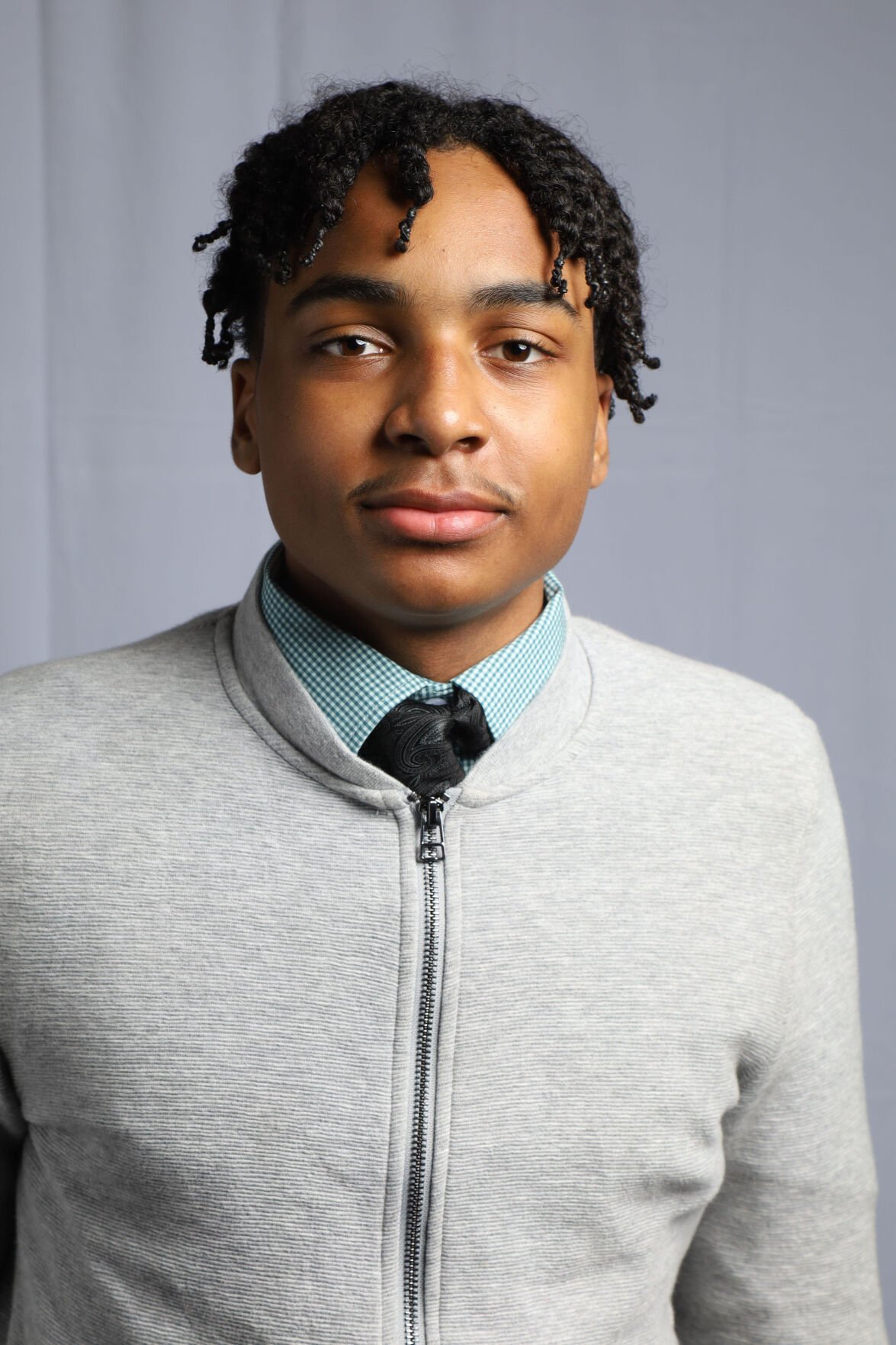 Leo guard Cameron Cleveland spots up for a jump shot last season in the regional championship victory over Grant Park. Now in his junior year, Cleveland will be a key guard for the Lions in a soon-to-be-decided hoops season. (Review file photo) 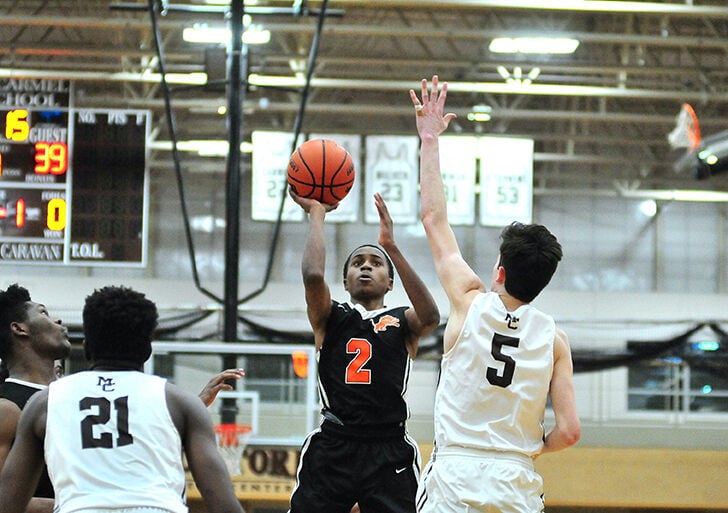 Former Leo guard Fred Cleveland Jr. pulls up for a jumper in the lane in a game during his senior year. Cleveland is now in his sophomore year at North Carolina A&T. His younger brother, Cameron, is a junior on the basketball team at Leo. (Review file photo)

Leo guard Cameron Cleveland spots up for a jump shot last season in the regional championship victory over Grant Park. Now in his junior year, Cleveland will be a key guard for the Lions in a soon-to-be-decided hoops season. (Review file photo)

Former Leo guard Fred Cleveland Jr. pulls up for a jumper in the lane in a game during his senior year. Cleveland is now in his sophomore year at North Carolina A&T. His younger brother, Cameron, is a junior on the basketball team at Leo. (Review file photo)

Cameron Cleveland is a 6’2” junior guard on the Leo basketball team. He grew up in the Chatham neighborhood, attended Ariel Community School and now lives in Richton Park. After missing much of his freshman season with a broken hand, Cleveland came on strong in his sophomore season with the Lions varsity. His older brother, Fred, is a sophomore at North Carolina A&T State University in Greensboro, N.C.

A potential decision on boys and girls basketball looms this week. How have you handled the winter months without basketball?

“It’s been a struggle, but I try and keep my mind off it. I try and stay busy, do some community work with the school, keep my grades strong, work out when I can and play.”

Any predictions on the IHSA basketball season?

“To be honest, I’m not really sure. I don’t think we’ll get the season we’re hoping for. It might just be some conference games, nothing like what we want from a normal winter season.”

What are your goals for whatever season you get?

How did you break your hand during freshman year?

“It happened in practice. My hand got caught up in a teammate’s jersey, and it got all tangled up. I broke the third metacarpal in my right hand. It hurt pretty bad. It felt like there was a 100-pound weight right on my hand. I was out November through January. When I came back, I was playing on the JV team.”

How good did it feel to get out and play as a sophomore?

“It really took a weight off my shoulders. Freshman year was a big setback. That pushed me to recover and come on strong. I started on the sophomore squad and then was starting on the varsity by the end of the year averaging about 10 points a game. It was keeping up with the speed of the game. It was so much faster.”

Are you able to keep in touch with your brother, Fred?

“I talk to him pretty much every day. He’s pretty well adjusted there. They had a couple conference games canceled because of COVID, but he has been getting back in a groove.”

Fred versus Cameron, who wins?

“It’d be a pretty good matchup, but I think I’d get him. I’ve got the height advantage, so I might be able to bully him into giving me the points I need.”

I imagine he’d say just the opposite?

How were your holidays?

“It was a pretty good Christmas. We were able to see Fred for a couple days before he went back to school. We usually go to my grandparents, but we weren’t able to this year. We all got some good gifts. My little brother, Devin, it was fun to see him get his presents. He got a pair of Jordan’s and a Playstation 5. I’m not a big video game guy, but I like watching and helping when I can. He plays ‘NBA2K’ and ‘Fortnite’ a lot.”

What do you with your free time?

“I watch a lot of TV shows, Netflix and college hoops. I binge a lot of shows. I just watched ‘Bridgerton.’ It was pretty good. [Over the last year], I watched ‘Grey’s Anatomy,’ too, like 11 seasons. Other shows are ‘All American’ and ‘Power.’”

“With college basketball, I feel like you learn a lot more watching than you do watching professional. [Auburn] freshman guard Sharife Cooper is one of my favorites. I catch every one of his games. [Morgan Park alumnus] Ayo Dosunmu, too. He’s like a big brother to me. The SEC, Big Ten, basically every college conference I’ll watch.”

Watching a ton of basketball recently?

“Yeah. It really did feel good for it to come back. You don’t realize how much you watch until it’s gone with nothing else going on.”

You’re a big fan of Ayo?

“Ayo played a lot with Fred, and I’d hang out a lot with Fred; so, I knew all his friends. I grew up around [Ayo]. It’s an inspiration to watch him. He grew up like we did, and he’s living the dream we all hope to live.”

Jordan versus LeBron, who’s the best?

“Jordan all the way. I’m not a huge LeBron fan. Michael’s the greatest, and LeBron always had help. I’m a big Kobe Bryant fan, too. People will say ‘LeBron is better than Kobe,’ and I say, ‘No way.’ If you’re in 10 NBA Finals but only win four, no way. You can’t be the greatest.”

If you were a big Kobe fan, how did you react to his shocking death last year?

“It was very surreal. We were actually playing Morgan Park that day. It really hit me when I heard the news. It didn’t feel right. I thought maybe it was a fake news headline, but then I saw it on ESPN. It became very real. My dad [Fred Sr.] was a hardcore Kobe fan. He’d argue with his friends about it, so I grew up hearing that and watching his games, the 81-point game especially. I’ve even got his pictures hanging up around my room.”

Let’s close with something lighter. What’s your favorite pizza place?

“If it’s by us, I’ll say Beggar’s. But, if we’re talking about around Leo, it’s always Italian Fiesta and Margerita’s. It’s always very good. I always pick sausage and shrimp.”

Shrimp, on a pizza?!