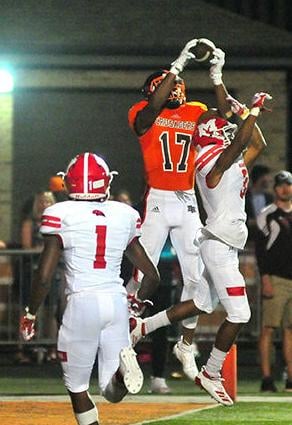 Moorehead is a 6’2”, 192-pound senior wide receiver for the Br. Rice football team. In his junior season as the Crusaders advanced to the Class 8A state semifinals for a second straight year, Moorehead finished with 21 catches for 235 yards and 2 touchdowns. He is a Beverly resident and Kellogg Elementary School graduate.

With the fall season still up in the air, think you’ll play?

“I believe so. I’ve been reading about that at the end of June and the beginning of July we’ll be able to do have 20 contact days in groups of 50 people or less. I’m pretty excited. The news seems to be getting better and better.”

What was your biggest takeaway from your junior season?

“I learned from [2019 grad and wide receiver] Kevin Phelan that this isn’t about ‘you.’ Playing for the team is far more important than being a superstar. You have to be a leader and grind things out. That goes a long way. If you have that bond, there is no selfishness. The unit is definitely stronger than the individual.”

What did you do to stay busy during the quarantine?

“Man, it was the worst possible thing for me. I’m an active kid. I just want to be working, to be moving. I was texting my teammates and friends all the time.”

What do you watch in your spare time? Movies? TV shows?

“I’d probably say “Gridiron Gang” is my favorite. One kid from one side of town and another kid from the other side of town, through football, it can bring people together. With football, you always have each other’s backs.”

“Giordano’s and Domino’s. Everybody makes fun of me for Domino’s, but I love it. I don’t know why. Everybody else hates it, but I can sit down and eat two pizzas. At Domino’s, I get bacon and pepperoni. At Giordano’s, it’s just pepperoni.”

“I’m a huge Cam Newton fan. I’m in love with him. I’m a diehard fan. When the Bears didn’t sign him, I was hurt. I would have bought season tickets. I actually met him once at a 7-on-7. He’s just a big guy. His calves are the size of my whole body. He shook my hand, and his hand just swallowed mine up.”

Who starts at QB for the Bears, Mitch Trubisky or Nick Foles?

“Nick Foles. He’s got the resume more going from the Eagles and Jaguars to the Bears. I’m biased toward Foles. There’s no pressure on him, so he can come in and just be that guy. Mitch just doesn’t look comfortable in the pocket.”

“Zendaya. I actually met her when I was in fifth grade. My sister was doing something for Disney, and I got to meet her. Oh, man, she smelled so good.”

“LeBron. Playing one-on-one, LeBron probably dominates. He’s 6’8”, 240-pounds. I really like Michael, but when he was playing, there was no one like LeBron.”

You’ve got a handful of college offers out there. What has recruiting been like during the quarantine and pandemic?

“Recruiting has gone really well. I just picked up an offer from Georgetown last week. Unfortunately, I haven’t been able to get out and visit any schools because of the coronavirus. Coaches get in contact, though. I’m not planning on committing until midseason. I want to make sure it’s the right decision.”