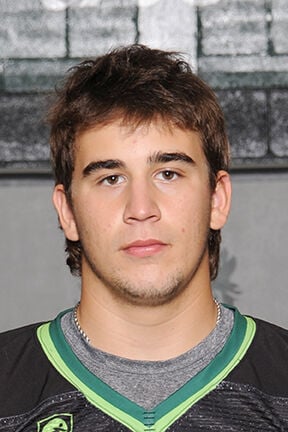 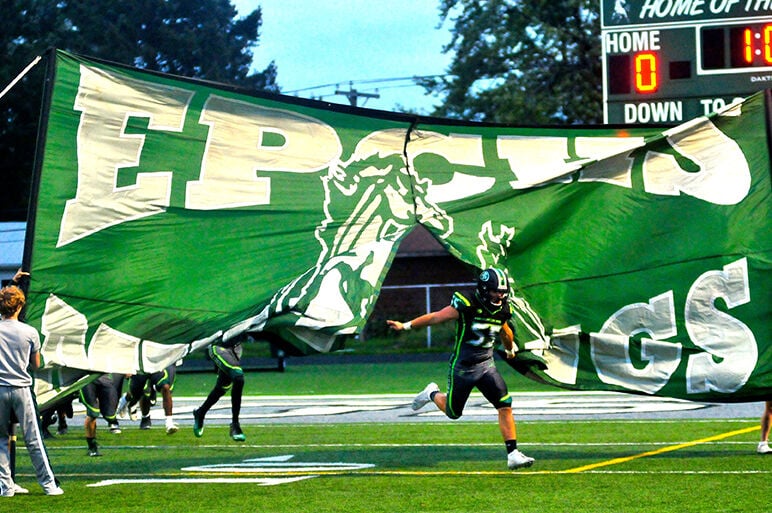 Evergreen Park linebacker Christian Rosso (55) leads the Mustangs onto the field before last year’s game against Leo. Rosso will play defensive end and on the offensive line this season, his third with the varsity. (Review file photo)

Evergreen Park linebacker Christian Rosso (55) leads the Mustangs onto the field before last year’s game against Leo. Rosso will play defensive end and on the offensive line this season, his third with the varsity. (Review file photo)

Rosso is a 6-foot, 215-pound defensive end and offensive lineman heading into his third season on Evergreen Park’s varsity football team. He also plays baseball for the Mustangs. An EP native, Rosso is a Central Middle School product. He played football in elementary school for Most Holy Redeemer. Rosso plans on playing football in college.

What’s it been like practicing with the football team in recent weeks?

“It’s a lot like a track practice. We work on footwork and sprints. We’re wearing facemasks when we’re running drills or plays where we’re closer together.”

Any gut feeling about fall sports?

“We’re trying to stay optimistic. We’re out here trying and grinding. We’re practicing like we’re going to play. We’re not going to let anything get in our way. We’re staying positive. We’re all going 100 percent. Guys are happy to be out at practice.”

What excites you about EP football in 2020?

“We only have six seniors, so we’re a very young team. I’m excited about the team. I think we can make it back to the playoffs and make it far. It’s hard to say when we’re not wearing pads, but we can be pretty good.”

Who do you model yourself after as a football player?

“He just retired, but it’s Luke Kuechly with the Carolina Panthers. He’s a hard-working guy. He is all over the place on the field and does everything. He’s always a steady player.”

What was your quarantine routine?

“Wake up, stretch, eat breakfast and help my mom around the house. Then watch some Netflix and work out. I never wanted to be too bored.”

Anything good on Netflix?

“I finished watching ‘Ozark.’ I did not expect season three to end that way. I was really glad they announced there is going to be another season. I’m pumped for it. That show is amazing.”

Are you a big movie/TV show guy?

“I watch a lot of TV shows and movies when I get the chance. I like action movies, love the Marvel movies, and I watch ‘The Office’ a lot.”

“Dwight is hilarious. I loved the episode where he and Jim had the snowball fight. I really like Ron Swanson [on ‘Parks and Recreation’], too. He’s my guy. I’m always talking about him. My mom never understands all the references.”

If you’re a Marvel fan, who’s your favorite Avenger?

“My favorite is Captain America. I really like the character. ‘Captain America: First Avenger’ is my favorite. He’s very patriotic, and so am I so I’ve always connected with him. ‘Endgame’ was incredible. It’s a long movie, but I’ve watched it three or four times. Just so much happens.”

What is your go-to pizza place?

“Roseangela’s. I grew up eating that pizza. That’s my go-to pizza. Usually I get thin crust with sausage, green pepper and onions.”

What else is on your playlist?

Who do you root for as a football fan?

“I’m a huge Notre Dame fan. I follow them a lot, and I’m a diehard Bears fan. I’ve got Bears stuff all over my room. I saw last week’s [Beverly Review Session with Leo’s Jalen Johnson] where he said he’s a Packers fan. I agree with him about a lot, but not that—just Bears.”

Mitch or Nick. Who’s starting at QB for the Bears?

“I think Mitch will take control. He’ll prove himself. We know Nick Foles is good, but let’s see Mitch play and do it. We need to see him do it. I hope he does.”

Who’s the best dancer on the team?

“Charles Holifield. He’s always loose and having a good time. He always gets his work done, but he is having fun.”

What is the best meal of the day?

“Breakfast is my favorite. I’d have scrambled eggs and bacon. [To quote Ron Swanson], ‘Give me all the bacon and eggs you have.’”

Who rocked the better summer mullet; you or your younger brother, Luke?

“Unfortunately, mine is gone now, but I’ll say my brother. He rocked it more than I did. He looked like Randy Johnson when he was out pitching on the mound.”

You and your brother both wear No. 55. Any reason?

“My uncle, Nick Knieps, played at Evergreen Park, and he wore 55. He helped me get into football. I wore 57 at Redeemer, but at Evergreen, I’ve worn 55 the whole time.”

What would playing your senior season mean to you?

“It would mean so much to play this year, my last year at EP, just one last time. I missed our Week 9 game last year and our playoff game with an ankle sprain. That hurt. That just hurt my feelings. To miss the playoffs was hard. I want to play one last time.”