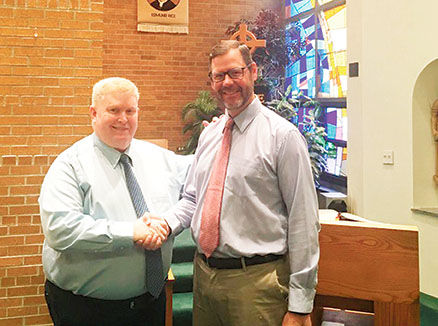 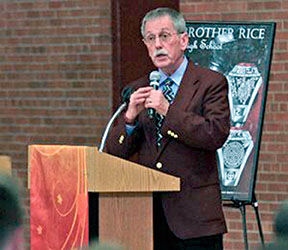 Bob Alberts, the school’s longtime assistant principal, will succeed Jim Antos, who will retire after serving as principal for over 20 years.

Bob Alberts, the school’s longtime assistant principal, will succeed Jim Antos, who will retire after serving as principal for over 20 years.

A myriad of factors led Br. Rice High School Principal Jim Antos to decide that the end of this school year will be the appropriate time to retire.

In reflecting on the “road ahead” and the “road behind,” he said, he was reminded that the road ahead is “not as deep.”

He didn’t know if he’d be comfortable signing a two-year extension, and he also wants to enjoy more time with his 2-year-old grandson.

So, at the end of June, Antos, the school’s principal for over 20 years, will retire.

Bob Alberts, who has been Br. Rice assistant principal for almost two decades and is an alumnus of the all-boys Catholic school in Mt. Greenwood, will succeed Antos.

Antos, who has taught at Br. Rice for 39 years, became principal at the start of the second semester of the 1997-98 school year.

Even when he became principal, Antos continued to teach—it was something he was passionate about doing while fulfilling his duties as an administrator.

One of his classes focused on the Vietnam War, which Antos served in. He said he took pride in getting to know students on a personal level as a teacher.

“As some principals who teach say, it is the best part and safest part of the day,” Antos said. “The kids are terrific.”

Alberts, of Evergreen Park, is a member of the Br. Rice Class of 1985, and he began working at his alma mater in 1991, when he was a basketball coach. He’s also coached golf and baseball.

He began teaching at the school in 1994-95, and he later served as admissions director. He became assistant principal in 1999-2000.

He said it is a “dream come true” to be named principal and follow Antos.

“To be able to step into those shoes, it’s kind of daunting, to be honest with you,” Alberts said. “Jim has done such a fantastic job as principal.”

Alberts said his goals focus on carrying on the mission of the Congregation of Christian Brothers, including increasing its members’ presence at the school. Only one member of the Christian Brothers currently teaches at Br. Rice.

He hopes an assistant principal can be hired during the week of April 16.

Antos said he strongly supports the decision to hire Alberts as principal.

“Bob is extremely well skilled in those technical aspects of scheduling and certainly working with moms and dads,” Antos said. “And the kids really, really adore him. He just gets along with so many people. I was just thrilled.”

He said he loves the atmosphere of working at Br. Rice.

“It’s just a happy place to be,” Alberts said. “Everyone loves being here.”

Antos echoed those thoughts, saying he worked to treat students with respect and show that he genuinely cares for them.

Antos plans to remain active at Br. Rice, serving in an organization of laypeople that engages in further studies of Edmund Rice, the Irishman who founded the Congregation of Christian Brothers and is the namesake of the school.

Those activities will mostly be after school.

Antos isn’t ready to say goodbye quite yet.