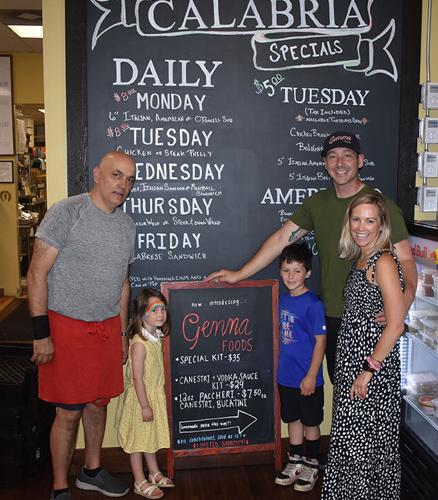 Gemma Foods, a pasta business run by Beverly resident Tony Quartaro (back right), is now selling at the retail level at Calabria Imports, owned by Pat Roberto (left). Gemma Foods is named after Quartaro’s and his wife Nora’s daughter (second from left). The couple are also parents to Carson (pictured) and Jude. (Review photo) 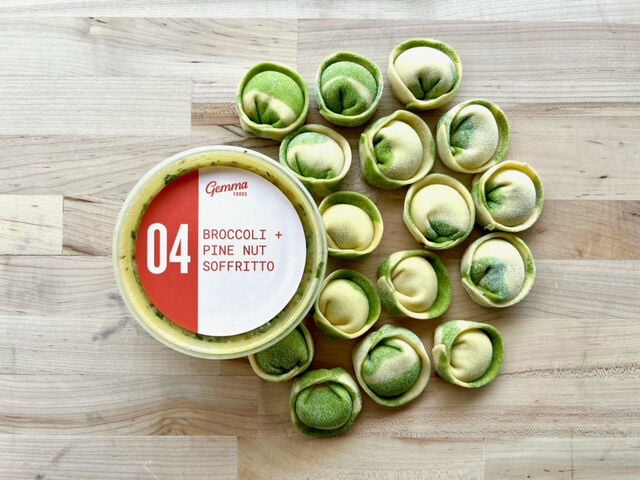 Crescenza cappelletti with broccoli and pine nut soffritto is among the pastas from Gemma Foods being sold at Calabria Imports, 1905 W. 103rd St. Gemma Foods will also participate in Foodie Fridays at Cork and Kerry Tavern in Beverly on June 24. 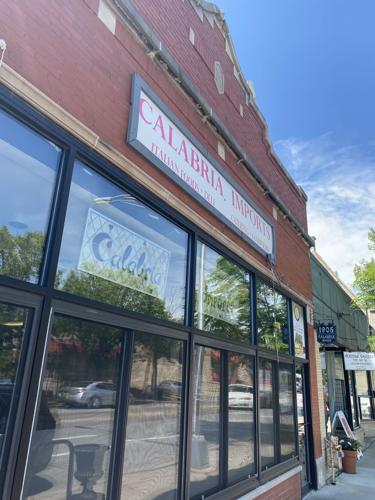 Gemma Foods, a pasta business run by Beverly resident Tony Quartaro (back right), is now selling at the retail level at Calabria Imports, owned by Pat Roberto (left). Gemma Foods is named after Quartaro’s and his wife Nora’s daughter (second from left). The couple are also parents to Carson (pictured) and Jude. (Review photo)

Crescenza cappelletti with broccoli and pine nut soffritto is among the pastas from Gemma Foods being sold at Calabria Imports, 1905 W. 103rd St. Gemma Foods will also participate in Foodie Fridays at Cork and Kerry Tavern in Beverly on June 24.

Since opening Gemma Foods about two years ago, Chef Tony Quartaro’s approach has been simple: give pasta to the people in a fresh, efficient manner.

Now, Quartaro, a Beverly resident, will make it easier for local residents to purchase his pasta every day.

Gemma Foods, named after Quartaro’s 5-year-old daughter, is selling many varieties of its pasta at Calabria Imports, 1905 W. 103rd St.

Quartaro, an Iowa native, first started his business by delivering to neighbors who would text him their orders.

While Gemma Foods now delivers to consumers within a 200-mile radius of Chicago, Quartaro is excited to sell it at the retail level at a local deli like Calabria.

“The Beverly community is obviously one of a kind—a special place,” Quartaro said. “My whole business started out of the pandemic; and it started in Beverly, and it would really not exist in its current form if it were not for people from Beverly.”

Quartaro, who is married to Beverly native Nora Kellam Quartaro, has spent his entire career as a restaurant chef. He worked in San Francisco and New York before coming to Chicago about 10 years ago.

He was furloughed from his position during the pandemic, he said, and wanting to “scratch some creative itches,” he began texting friends about their interest in him making them fresh, hand-crafted pasta.

A list of 10 people soon grew to 25 people, he said, and now, Gemma Foods operates out of a space at 1117 W. Grand Ave., in the West Loop. Pasta is available at the retail level there and several other locations in the city.

Quartaro prides himself on a fresh pasta that only takes 2-3 minutes to cook, instead of the 10 to 12 minutes that dried pasta might take.

A variety of pasta sauces are also available.

Quartaro said he uses flour milled in Italy, and “the best stuff we can get our hands on locally for produce.”

The partnership with Calabria debuted at the Morgan Park Beverly Hills Business Association’s Spring into Summer festival and sidewalk sale on 103rd Street on May 28.

Quartaro sold his pasta out of Calabria’s food truck.

“It was great,” Quartaro said. “The response has been fantastic.”

Calabria owner Pat Roberto is excited about the new partnership.

Quartaro didn’t take the traditional route in becoming a chef. He earned a degree in liberal arts from the University of Kansas, but while a student, he worked at a high-end restaurant where he made pasta from scratch.

He moved to San Francisco after college, where a colleague advised him not to attend culinary school, saying that when Quartaro began working, he would still need to work his way up the ranks just the same.

Quartaro grew up eating Italian food, he said. He and his father, Nick, would discuss what they were having for dinner while they were eating lunch.

“Food is the most important thing on that side of my family,” Quartaro said. “I loved that. I loved everything about it.”

Among the items on the Gemma Foods menu include canestri alla vodka; paccheri with Sunday gravy; bucatini cacio e pepe; and crescenza cappelletti with broccoli and pine nut soffritto.

The bucatini has become “a fan favorite,” Quartaro said, and “our vodka sauce is pretty special.”

He said he checks weekly market reports to make sure he offers high-quality ingredients, and he enjoys seasonal dishes, just like chefs do in Italy.

“I think eating seasonal,” Quartaro said, “is the best way to eat.”

Dan Barrett, a Beverly native, is Quartaro’s business partner, and Tiffany Goebel, the Quartaros’ neighbor, is assisting with marketing.

On June 24, Gemma Foods will visit Cork and Kerry tavern, 10614 S. Western Ave., as part of its Foodie Fridays.

Quartaro said he appreciates how other local businesses have partnered with him.

“That sense of community,” Quartaro said. “You can’t beat it.”

Quartaro said people have inquired about whether he would open a restaurant; however, he has no plans to open an eatery but wouldn’t rule it out.

For now, he is enjoying the early success of his business while maintaining a family-work balance.

He’s grateful for the local response to Gemma Foods.