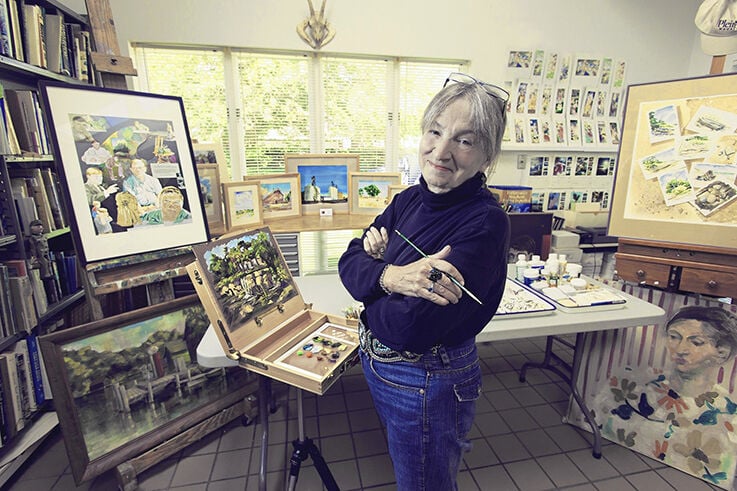 Judie Anderson works in her home studio. She will be honored during the Beverly Art Walk on Sept. 18. The longtime illustrator has enjoyed a successful career in the arts. (photo by Diego Martirena) 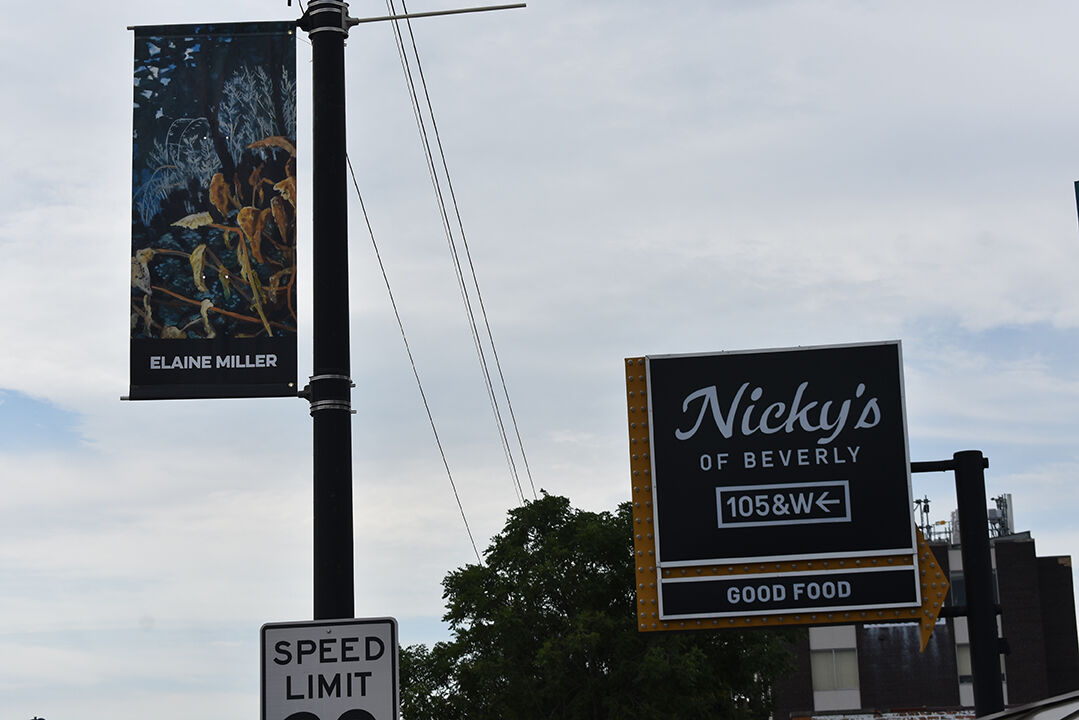 Streetpole banners celebrating artists such as Elaine Miller are on display on Western Avenue in anticipation of the Beverly Art Walk. Nicky’s of Beverly, 10500 S. Western Ave., will host an after-party at the walk’s conclusion. 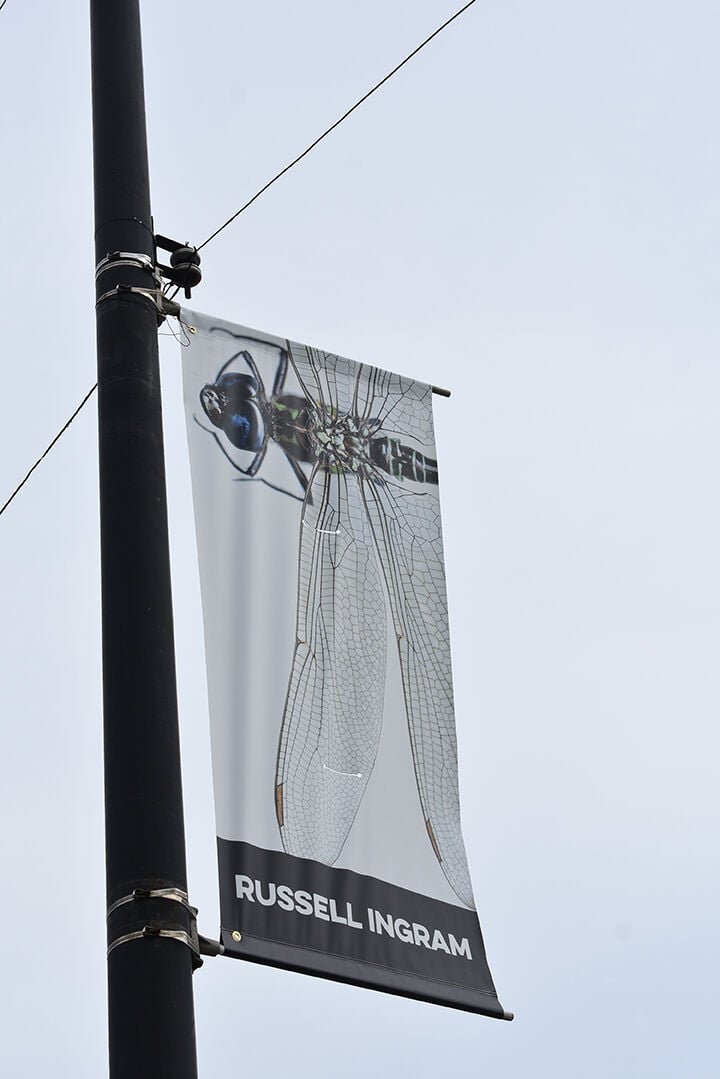 The art of Russell Ingram is also celebrated on a streetpole banner. 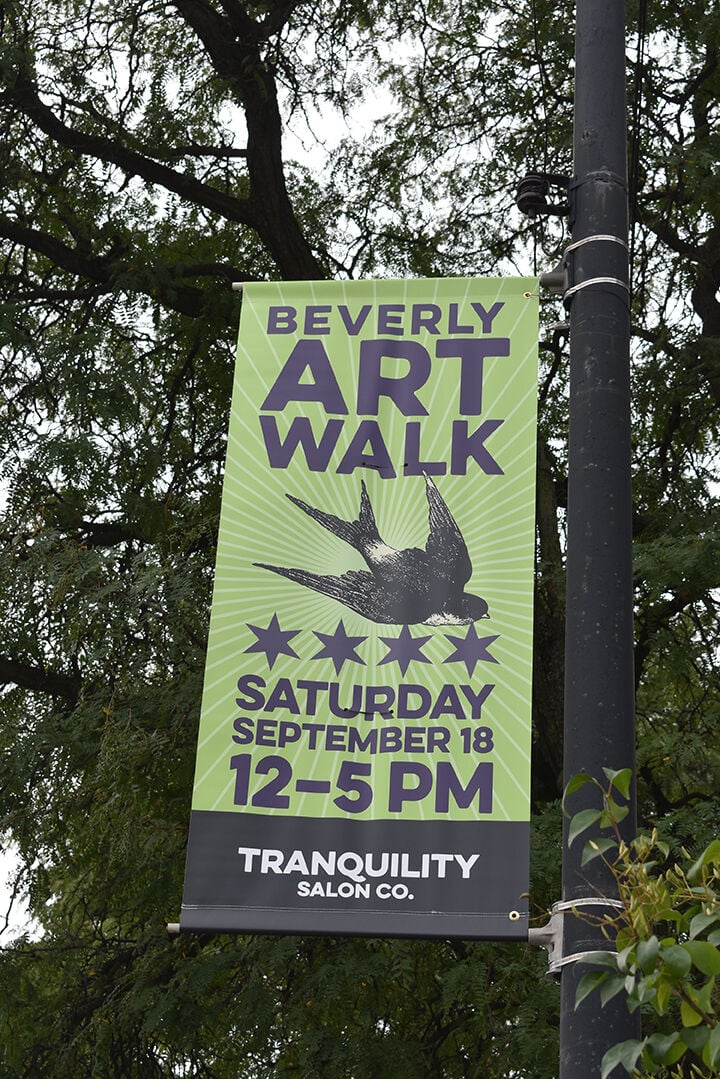 The art walk is family friendly, organizers said, and “hubs” of activities will be installed on major corridors such as 95th, 99th and 103rd streets. (Review photos) 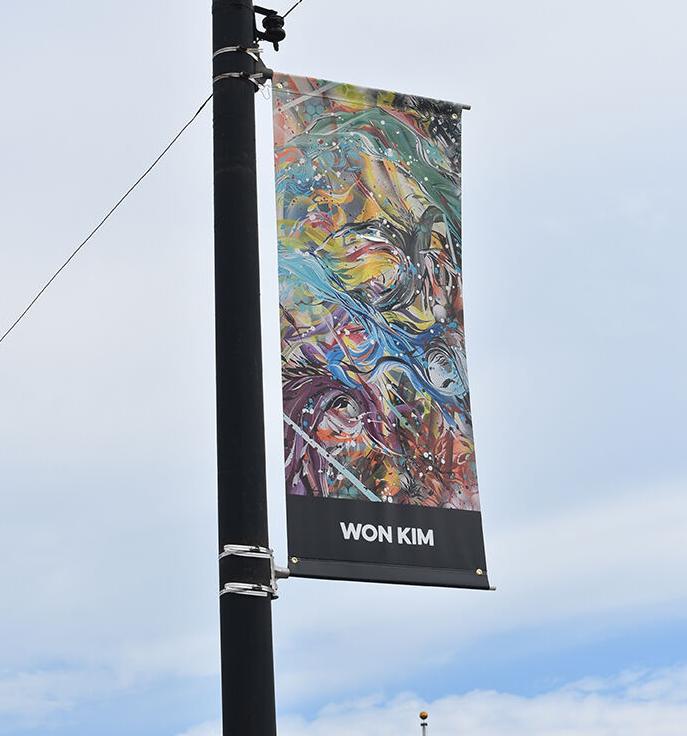 Judie Anderson works in her home studio. She will be honored during the Beverly Art Walk on Sept. 18. The longtime illustrator has enjoyed a successful career in the arts. (photo by Diego Martirena)

Streetpole banners celebrating artists such as Elaine Miller are on display on Western Avenue in anticipation of the Beverly Art Walk. Nicky’s of Beverly, 10500 S. Western Ave., will host an after-party at the walk’s conclusion.

The art of Russell Ingram is also celebrated on a streetpole banner.

The art walk is family friendly, organizers said, and “hubs” of activities will be installed on major corridors such as 95th, 99th and 103rd streets. (Review photos)

“She’s kind of the queen of the art walk.”

That’s how Judie Anderson, the beloved, accomplished artist from Beverly, is described by Monica Wilczak, co-founder of the Beverly Art Walk.

As the art walk returns to its traditional format this year, Anderson, 82, will be honored by The Beverly Area Arts Alliance when the event is held Sept. 18, from noon to 5 p.m.

Anderson, just as she has in the past, will open her home studio on the 10600 block of South Hoyne Avenue for the art walk, although activities will take place in her yard due to COVID-19.

She is proud to be among the more than 100 artists participating at over 40 local venues—and she is amazed by what Wilczak and close friend Sal Campbell have accomplished since they created The Alliance seven years ago and formulated plans for the art walk. She fondly remembers that first meeting with them.

“I thought they were doing a super job—and they were,” Anderson said. “Those two gals have put us on the map as far as the arts go, and they’re continuing to do so. So, I really did support them.”

With her late husband, Bill, Anderson became an anchor for the arts in Beverly. The couple was on the board of directors for the Beverly Arts Center (BAC) when it was built over 50 years ago, and shortly after it opened, they created the School of the BAC.

Anderson was an illustrator for the Chicago Tribune for 20 years beginning in the early 1980s, and she will sell her illustrations during this year’s art walk.

She will also sell copies of “Color Me Beverly” and “Color Me Morgan Park,” two coloring books she created with her friend Carol Flynn that highlight historic places in the community.

Anderson has opened her home studio for every walk since it was first held in 2014. She said Wilczak and Campbell have done “a superhuman job” in promoting the arts.

“Those two gals and the group they’ve surrounded themselves with, they are really something,” Anderson said. “Every year, they come up with something new.”

Besides the art walk, Wilczak and Campbell have spearheaded many events for The Alliance, including craft markets throughout the year, art exhibits and concerts.

While they have certainly played an enormous role in the emergence of arts events in the community, they lauded Anderson for paving the way.

“Judie has been such a leader in the arts in Beverly and Morgan Park, and really just an incredible advocate,” Wilczak said. “She has been an active artist her entire life, making art up until now. We just felt it was the right time to honor her in a celebratory way.”

“I just admire her so much as an artist and as a person,” Campbell said. “She’s accomplished so much in her lifetime, and she’s still constantly engaged with art and creating. I hope to be like her when I’m that age, for sure. She’s really special to us.”

Last year’s walk was transformed into “Alt Walk,” with exhibits on display in local businesses’ windows and visitors encouraged to walk by at their own leisure.

Organizers knew that plans for this year could change at any time due to COVID-19 and any restrictions in place, but they are thrilled with how it’s come together.

Schools, studios and businesses spanning roughly from 95th to 111th streets are participating, and public art will be featured at many spots.

Sutherland Elementary School is hosting a family park with children’s activities, and “hubs” will be installed on major thoroughfares, including 95th, 99th and 103rd streets.

Participation fees for artists and venues were waived this year to make life easier during the pandemic, and businesses stepped up by underwriting streetpole banners promoting the walk that are displayed on Western Avenue. They highlight businesses, artists and artists’ works.

The corridor looks more colorful in building anticipation for the walk.

“With the inclusion of those banners, we have transformed Western Avenue into a gallery, which is pretty incredible,” Wilczak said. “While it’s temporary, it’s a really incredible investment in public art in the neighborhood.”

“I love it,” she said. “It looks fantastic. I get really excited about it just looking at it going down Western Avenue.”

Campbell said organizers are encouraging people to bike to various spots this year, noting that Divvy stations are installed around the community.

Nicky’s of Beverly, 10500 S. Western Ave., will host a free after-party when the walk concludes.

Many new businesses are serving as venues, and Wilczak hopes attendees check them out.

“This is a way for people to really explore our entire neighborhood,” Wilczak said, “and see all these neat things that are offered across the neighborhood.”

A full map of the Beverly Art Walk will appear in the Sept. 15 issue of The Beverly Review.