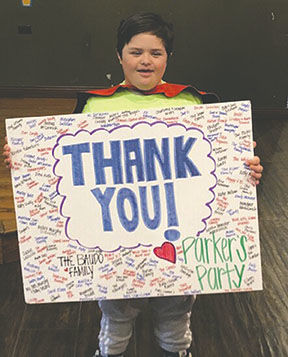 Parker Baudo, 10, sends his gratitude to supporters of Parker’s Party, his Chicago Polar Plunge team, during a fundraiser on Feb. 22. Parker’s Party will plunge into Lake Michigan on Sunday, March 1. 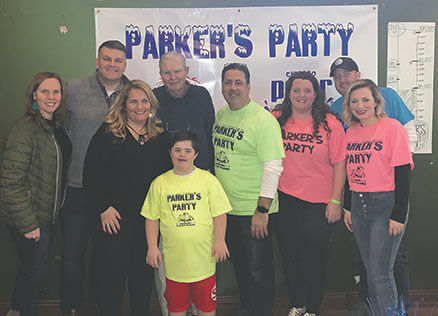 Parker Baudo enjoys a fundraiser for his Chicago Polar Plunge team with his family and friends on Feb. 22. The St. Barnabas Elementary School fourth-grader recently made his first basket for the school basketball team, with both teammates and the Christ the King Elementary School opponents celebrating with him. St. Barnabas teacher Grace Sadowski (third from right) said Parker “brings out the best in everyone.”

Parker Baudo, 10, sends his gratitude to supporters of Parker’s Party, his Chicago Polar Plunge team, during a fundraiser on Feb. 22. Parker’s Party will plunge into Lake Michigan on Sunday, March 1.

Parker Baudo enjoys a fundraiser for his Chicago Polar Plunge team with his family and friends on Feb. 22. The St. Barnabas Elementary School fourth-grader recently made his first basket for the school basketball team, with both teammates and the Christ the King Elementary School opponents celebrating with him. St. Barnabas teacher Grace Sadowski (third from right) said Parker “brings out the best in everyone.”

Parker Baudo has become an internet sensation—and now, he will join his friends and family for the fourth straight year at the Chicago Polar Plunge to raise thousands of dollars for Special Children’s Charities/Special Olympics Chicago.

Parker, a St. Barnabas Elementary School fourth-grader who was born with Down syndrome, scored his first points for the school’s basketball team in late January. The joyous moment was captured on video, with both his teammates and opponents from Christ the King Elementary School celebrating along with him.

Parker, 10, is treated just like every other student at St. Barnabas, which he has attended since kindergarten, and as the leader of Parker’s Party, he will sprint into the frigid waters of Lake Michigan at North Avenue Beach on Sunday, March 1, at the Polar Plunge.

At a fundraising party at Barney Callaghan’s pub in Beverly on Feb. 22, St. Barnabas second-grade teacher Grace Sadowski, who formed the plunge team, said she fell in love with Parker the day she met him.

“He just brings out the best in everyone,” Sadowski said. “His class is the sweetest class I’ve ever taught. He’s just a sweet kid.”

Sadowski is also Parker’s basketball coach, and she watched as he connected on that memorable basket.

Parker made a jump shot, excitedly flexed for the crowd, then eagerly got back on defense—all as the crowd roared. The school posted the video on its Facebook page, and it has received over 1,000 views.

In spearheading Parker’s Party, Sadowski has helped raise about $26,000 in the past four years.

She will join Parker and his family in their plunge into the lake.

Parker’s Party hosted a pre-plunge fundraiser for the first time, and his father, Rich Baudo, said he is grateful for the support.

“It’s just heartwarming,” Baudo said. “It’s great to be part of this community. Everybody comes together. People made it a point to be here tonight because they love Parker.”

Students with special needs don’t often attend private school, but St. Barnabas has accepted Parker from Day 1, his family said. His classmates treat him like any other classmate, although they realize he may need a little extra help.

Sadowski is a friend of Parker’s family, and she said she knew when Parker was born that she wanted him to attend the school.

When the family met with Principal Elaine Gaffney, she laid out a clear plan, Rich Baudo said.

“She’s just like, ‘This is happening, so we just got to make it the best experience we can for him,’” Baudo said. “And, that’s all they’ve done from kindergarten on.”

St. Barnabas will host a dress-down for Parker’s Party on Friday, Feb. 28, and on the day of the plunge, supporters will celebrate at Barney Callaghan’s again—before and after they plunge.

Parker realizes how much others have done for him, Rich Baudo said.

He always tries to return the favor.

“He gives as much as he gets.”

Another member of the MGSRA is also leading a team into the Polar Plunge.

Team Dan Fahey, named after a boy from Beverly, has 60 members and has already raised over $17,000 this year.

Dan’s father, Jim Fahey, credited his older son, Jack, 28, for organizing the team four years ago with friends from St. Barnabas, and they have raised close to $100,000.

Last year, organizers had to break up the ice to open a section of water for plungers. Such conditions never stop Jim Fahey, 63, from participating.

“It’s invigorating, to say the least, for sure,” Jim Fahey said. “Last year, it was extremely cold.”

Dan has plunged before, his father said, but now he just roots on his supporters, as he quipped that he can now take the Polar Plunge “off his bucket list.”

Jim Fahey also had high praise for the MGSRA. The program builds confidence, he said, and other participants have become like family to his son.

The MGSRA is expected to have several teams participate in this year’s plunge.

“I can’t say enough good about the program,” Fahey said. “They’re very active in everything that Special Olympics offers. They really do get the kids involved. … They’re very positive. They do great coaching. They make the kids want to be competitive and participate the best they can.”

According to organizers, the event is on track to raise over $2 million this year.