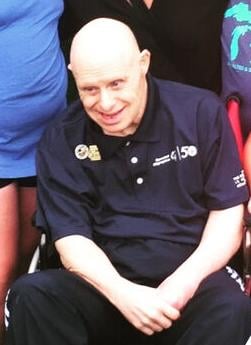 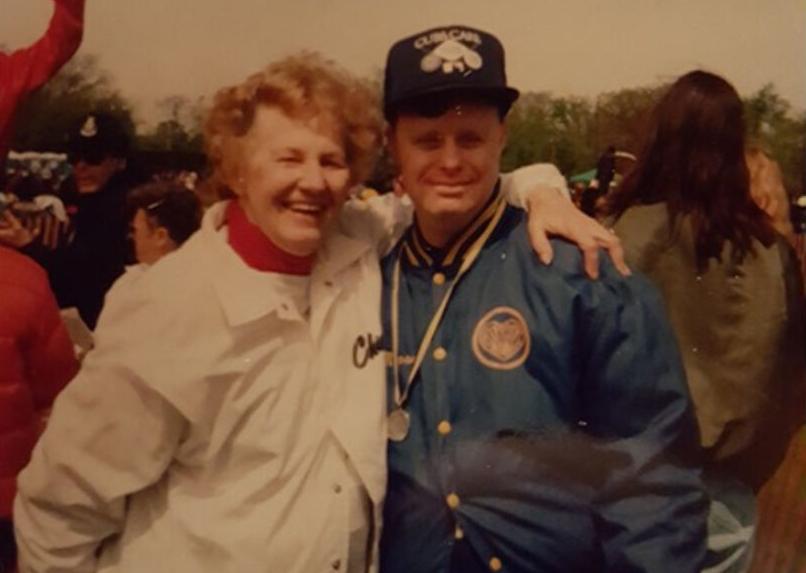 Michael Cusack enjoys a moment with his mother, Esther. She and her husband, John, raised their son at home, a rarity in the 1960s for parents of children born with special needs. Cusack was among the first athletes to participate in the Special Olympics, and he became an accomplished swimmer, golfer and bowler.

Michael Cusack enjoys a moment with his mother, Esther. She and her husband, John, raised their son at home, a rarity in the 1960s for parents of children born with special needs. Cusack was among the first athletes to participate in the Special Olympics, and he became an accomplished swimmer, golfer and bowler.

Michael “Moose” Cusack was a pioneer—for his family, for his city and for the world.

Born with Down syndrome, Cusack was among the first athletes to participate in the Special Olympics.

The Beverly native displayed impressive athletic abilities, but his positive attitude was even more remarkable.

Cusack died on Dec. 17 at age 64, and his family and friends are remembering a man with a beautiful soul.

“He was such a fun uncle. He taught us really the true value of being kind, and loving everybody, no matter what,” said his niece, Mary Gill. “It’s something that I’m so blessed to have in my life because my kids have it, too.”

Cusack was among those paving the way in 1968 for thousands of other athletes with special needs. He had participated in a program for such athletes at West Pullman Park under the guidance of current Illinois Supreme Court Justice Anne Burke, and when Burke organized the first Special Olympics at Soldier Field that July, Cusack was among the 1,000 competitors from 26 states and Canada.

When Special Olympics celebrated its 50th anniversary in July 2018 at Soldier Field, Burke singled out Cusack as “one of my first students,” and he joyfully waved to her in recognition.

During his althletic career, Cusack racked up hundreds of medals—which his family gave to visitors at his wake.

However, winning didn’t define him—it was his attitude.

“He taught us great sportsmanship,” said Gill, who is executive director of the Mt. Greenwood Community and Business Association. “He never cared if he lost. He wanted everybody else to be happy and win. He truly was just a great, great, amazing uncle. I can’t express how lucky we were to have him.”

“He always gave 150 percent,” she said. “He didn’t care if he got first place or sixth place. It didn’t matter.”

Cusack participated in a variety of sports, but he thrived in swimming. Henaghan, 10 years younger than Cusack, thought she could challenge him in a race in the pool, but he got the better of her. Cusack had every stroke—and technique—down pat.

“He would flip turn with such ease,” Henaghan said. “He was just a natural swimmer.”

Swimming was his best sport, Gill said, but Cusack was also proficient in golf, bowling and track and field.

“He had natural talent,” Gill said. “He was good at anything he tried.”

Cusack was the second oldest of Esther and John Cusack’s five children—and their only son. At a time when parents were advised by doctors to institutionalize children with special needs, Esther and John were adamant that their son would be coming home.

Cusack was treated like everyone else by his family. He had daily chores, and he attended school, including Barnard Elementary. He also received his First Communion at St. John Fisher Roman Catholic Church.

For the past 27 years, he was a resident at Good Shepherd Manor, a facility for men with special needs in Momence, Ill., about 45 miles south of Chicago. He participated in a work program there and was a member of the Good Shepherd Choir.

Cusack would quip that he was “going to college” when he returned to Good Shepherd after home visits, Gill said.

Growing up, Gill and her siblings always enjoyed swimming and other fun activities with their uncle.

“He was the purest soul I’ve ever met in my life, and he truly loved everybody,” Gill said. “He was goofy and funny and stubborn. There’s not enough wonderful words to describe him.”

“Judy Garland was his everything,” Gill said. “He loved Judy Garland.”

About 14 years ago, Cusack suffered a stroke that affected his left side. He was left-handed, so that made life more difficult. However, Gill said, Cusack pressed on—and kept active by bowling.

“It didn’t bring him down,” Gill said. “The last time I saw him, he was smiling and happy.”

Cusack inspired Gill and other family members to dedicate significant parts of their lives to helping people with special needs.

Gill was previously a special-education teacher, and her sister, Kate Grant, is the special-recreation coordinator at McGuane Park in the Bridgeport neighborhood. Family members of multiple generations have spent time volunteering with special-recreation programs.

Gill said her children are better people because of Cusack.

“He’s the definition of kind.”

Cusack is survived by his siblings, Constance (John) McIntosh, Maureen (Donald) McCormack, and Colette and Carole Cusack; many nieces and nephews; and his family at Good Shepherd Manor.