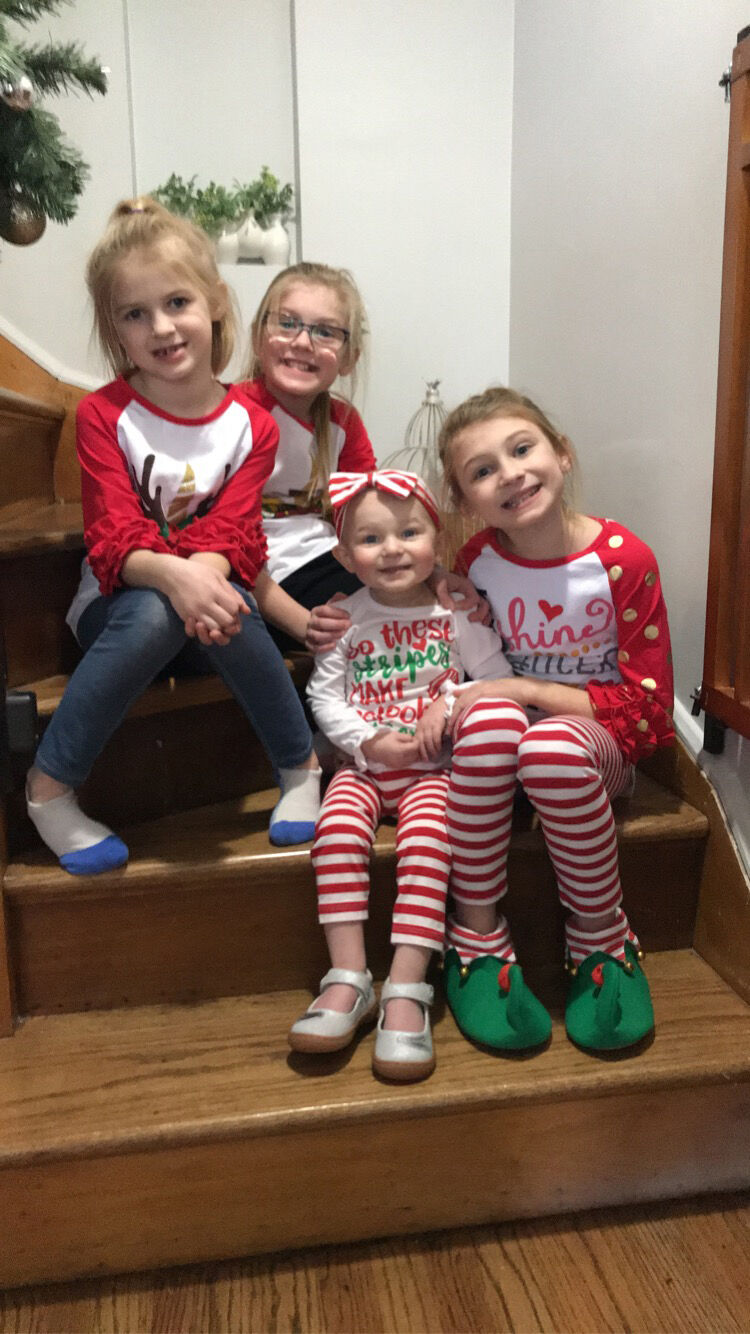 Finley Bracken (center), a 2-year-old from Morgan Park seen here with her three sisters, succumbed to cancer last year. The Finley Forever Foundation was formed in her memory, and on Friday, Dec. 3, the charity will lead the Lights and Ladders Brigade to put up holiday decorations at the homes of local families who are battling cancer. 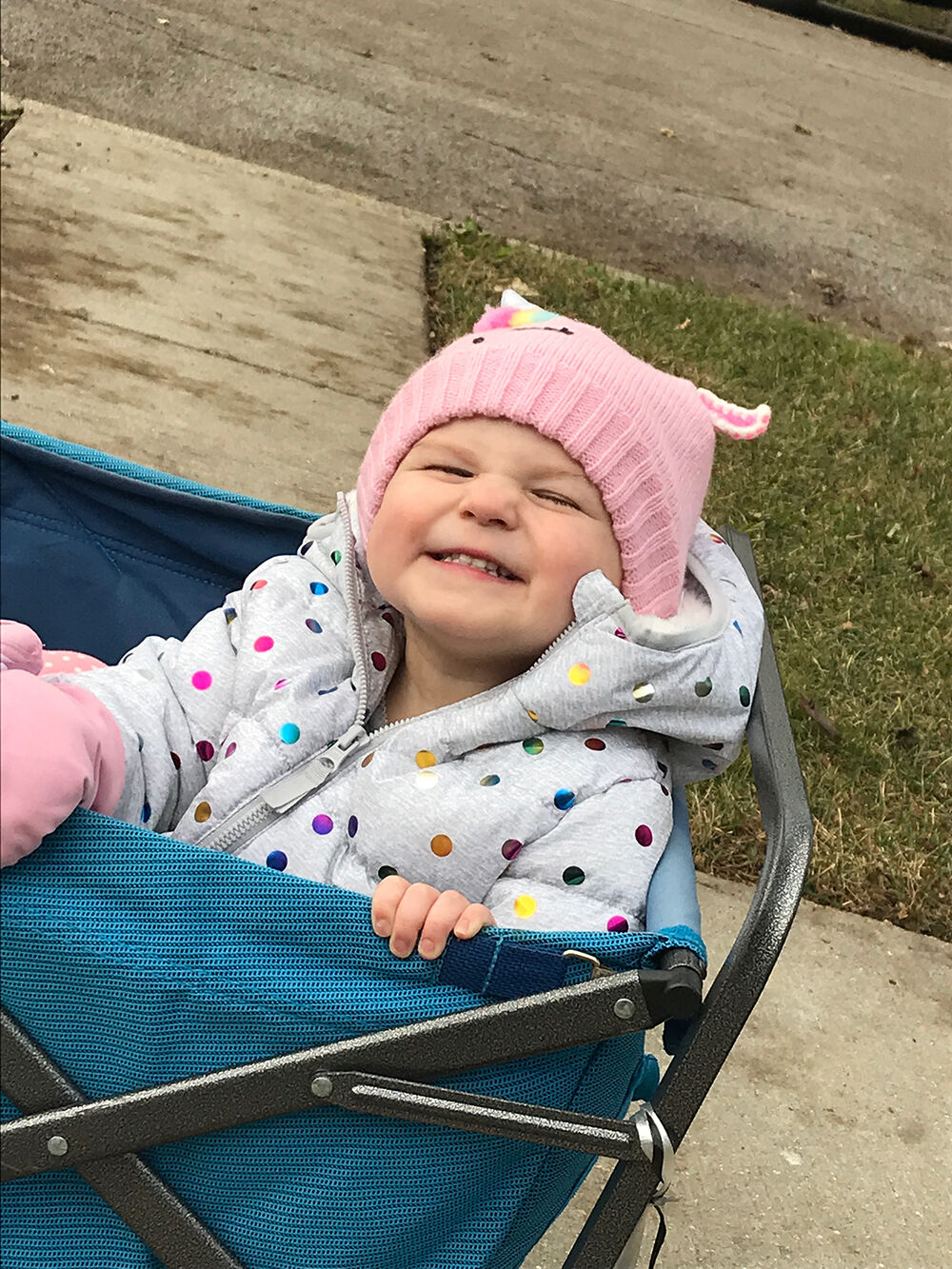 Finley Bracken endured cancer for 11 months. Her mother and father, Lacey and Dan, want to provide the same kindness they received during their daughter’s struggle. The Lights and Ladders Brigade will be decorating homes on Friday, Dec. 3.

Finley Bracken (center), a 2-year-old from Morgan Park seen here with her three sisters, succumbed to cancer last year. The Finley Forever Foundation was formed in her memory, and on Friday, Dec. 3, the charity will lead the Lights and Ladders Brigade to put up holiday decorations at the homes of local families who are battling cancer.

Finley Bracken endured cancer for 11 months. Her mother and father, Lacey and Dan, want to provide the same kindness they received during their daughter’s struggle. The Lights and Ladders Brigade will be decorating homes on Friday, Dec. 3.

After her 2-year-old daughter, Finley, died of cancer last year, Lacey Bracken and her family are still experiencing heartache of the worst kind.

In her memory, they created the Finley Forever Foundation, and now, they are partnering with two charities to provide holiday cheer for other families fighting cancer.

On Friday, Dec. 3, beginning at 4 p.m., the Finley Forever Foundation will team up with Christmas Without Cancer (CWC), the Tom Hopkins Foundation and over 50 volunteers from numerous fire departments to decorate the homes of six local families.

They’re calling themselves the Lights and Ladders Brigade—and Lacey Bracken said she wants to “pay it forward” after so many people helped her family during their battle with cancer.

“I just had this vision for a while,” Bracken said. “I just really wanted to team up with [CWC and the Hopkins Foundation] because we can tie our resources together. ... Why not stick it all together and come up with a big plan?”

Finley Bracken, of Morgan Park, the youngest of four girls, died on Sept. 11, 2020, after being diagnosed 11 months earlier with neuroblastoma.

The Finley Forever Foundation provides monetary donations to families affected by cancer, as well as gifts for people who, like Finley, are stem-cell transplant patients at Lurie Children’s Hospital.

The Lights and Ladders Brigade will spend about one hour at each house, visiting families in Beverly, Mt. Greenwood, Evergreen Park and Oak Lawn. Their stories include a family member just being diagnosed, one relative dying during the Thanksgiving season and one person dying 19 days after being diagnosed.

According to organizers, each family will have a “winter wonderland” displayed at their home, including holiday lights, garlands and inflatable characters.

The firetrucks’ lights will shine and sirens will blare, and the Grinch will be there to make a special appearance.

Each family will also receive containers to store their decorations, so they can display them again next year.

Lawn signs supporting the brigade are being sold for $20, with proceeds going to the families.

Bracken said that over 50 firefighters volunteered within 48 hours—she is a former firefighter, and her husband, Dan, is currently a firefighter, so they were able to recruit firefighters from as far away as St. Louis.

The Hopkins Foundation, based out of Morgan Park, and CWC, based out of Evergreen Park, both helped the Brackens during Finley’s battle.

Bracken said the groups’ support—along with help from loved ones and strangers—gave her strength. She wants others to have that same comfort.

“The power of that, with the community just coming together and helping my family, that made our journey so much easier,” she said. “I just know if we can provide that for someone else, that they can have something be a little bit easier.”

Renee Copeland, CWC vice president, said Bracken reached out to her several months ago about forming the brigade.

CWC signed on immediately, and so did the Hopkins Foundation, which is named after a Morgan Park resident who died of cancer.

“We right away fell in love with the idea,” Copeland said. “We were on board right away. Our organization started around Christmas time, so Christmas kind of holds a special meaning to our organization. Although we help families year-round, at Christmas, we kind of go big.”

Copeland, of Alsip, has also dealt with cancer on a personal level. Nicholas Miceli, a 2-year-old from Mt. Greenwood who died in 2019, was the son of Copeland’s cousin, Khrissy Miceli.

Copeland knows Dec. 3 will be bittersweet for the families the brigade helps.

“At the end of the day, though, I hope that we bring smiles to them,” she said. “That’s our goal. I hope that they know that we’re thinking of them. … We’re only a phone call away if you ever need anything.”

Liam Hopkins—Tom’s son—said the brigade is a way to bring joy during the holidays.

“The holiday season can be hard for these families, especially having to deal with the current treatment some may be going through or even the grieving of a lost loved one, and being able to help them in a little way by decorating the houses for them just makes it much more special,” he said. “Lacey and Dan are doing a great job with this and the Finley Forever Foundation. Finley was our main recipient in 2019 when she was diagnosed, and to see how, in such a short time since Finley gained her angel wings, the Bracken Family is spreading that love to other families, we are honored to take part in such a special night with them this Friday.”

Bracken said for the first nine months after Finley died, she had trouble doing anything.

But then, she decided to spring into action.

As a result, the Lights and Ladders Brigade will brighten up the holidays for numerous families.

“Finley made such an impact on so many people,” Bracken said. “I’ve had messages from people I don’t know that say watching her courage, that changed our lives.

“So, I thought, ‘Why not continue that? Why not have such a good thing keep going?’”