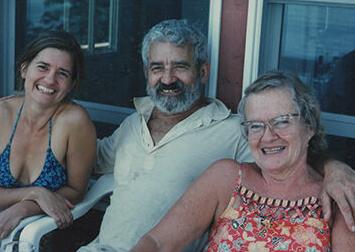 Paula Bukacek enjoys a moment with her husband, Richard, and their daughter Sara. Bukacek taught at local Montessori schools, and she and Richard founded All Day Montessori, 1819 W. 99th St., in 1995. Bukacek, of Beverly, died on Oct. 3 at age 88. An avid poet and gardener, she was known for encouraging children to think freely and explore the world around them.

Paula Bukacek enjoys a moment with her husband, Richard, and their daughter Sara. Bukacek taught at local Montessori schools, and she and Richard founded All Day Montessori, 1819 W. 99th St., in 1995. Bukacek, of Beverly, died on Oct. 3 at age 88. An avid poet and gardener, she was known for encouraging children to think freely and explore the world around them.

When Paula Bukacek first learned about the benefits of a Montessori education, she dedicated her career and life to that philosophy for the next 60 years.

Bukacek died on Oct. 3 at age 88, and her friends and family are remembering the Beverly resident for her brilliant, fun-loving nature.

“When I think of her, I always think of her laughing,” said Jean Doyle, a longtime friend who is now president of the board of directors at All Day Montessori. “She always saw the brightness and humor in things. She had this certain chuckle—kind of a low, throaty, belly-laugh chuckle. … She had a great sense of humor.”

Bukacek had just retired, but when her daughter gave birth and was searching for daycare, Bukacek realized the community needed a Montessori school that was suited toward working parents.

The Montessori method, established by Dr. Maria Montessori, focuses on children learning independently, exploring the world around them.

Doyle said she is amazed that the Bukaceks would take on such an “audacious” project in opening the school at their older age.

When they stepped away from All Day in 2010, they left an endowment that allowed the school to purchase the property.

“I just think that it’s such a great school, and they believed so much in the positive effects of Montessori education, and that it should be available to as many kids as possible,” Doyle said. “It’s been very inspiring to stay on with the board and try to help fulfill that mission.”

At her funeral services, her husband said Bukacek establishing All Day Montessori was “the chief achievement” of her professional life.

Some questioned her opening the school to 2-year-olds, but Bukacek was confident she could help students of that age.

“Maria Montessori’s original work in early childhood education had been forgotten, and Paula revived it,” Richard said. “The greatness of Paula’s person is in her resolute steadfastness in adhering to Maria Montessori’s fundamental principle that the adult’s role is to observe the needs of the child and to respond to those needs in the context of the changing culture.”

Doyle met the Bukacek Family over 40 years ago, as she was friends with the Bukacek children. She knew any time she visited the family’s home, music and dancing were in store.

The Bukaceks promoted a Montessori-like philosophy of independent thinking at home, Doyle said, and she knew she could speak her mind. Bukacek would often reply to Doyle’s comments with “Well, that’s fascinating.” Sometimes, she was serious, and sometimes, she was sarcastic.

Bukacek and her husband continued to allow their children—and their friends—to express their thoughts as teens and college students.

“It worked out beautifully,” Doyle said, “because at least from my perspective, they weren’t judging us. They knew that life would teach us, through its natural consequences, what made sense and what didn’t. They had faith in our intelligence and our ability to make good choices, or if they were not good choices, choices that would teach us the necessary life lessons to survive. I just love that philosophy.”

Bukacek had “a great appreciation” for beauty, Doyle said. She loved gardening and poetry, and she continued to pursue those passions at Smith Village retirement community in Morgan Park.

Late in her life, Bukacek lived with arthritis and macular degeneration, and the latter affected her vision. When Doyle joined her on walks, Doyle often held flowers close to her face so she could see them.

Doyle said the Bukaceks were the only family she knew growing up that had a pottery studio in their basement.

The couple always treated each other “with absolute respect,” Doyle said, and as though the other was their “most honored guest.”

That respect extended to everyone they met.

“They were just very cultured, very embracing of people achieving their greatest potential in the arts or through technology or whatever was their way,” Doyle said. “They just really believed in the human spirit.”