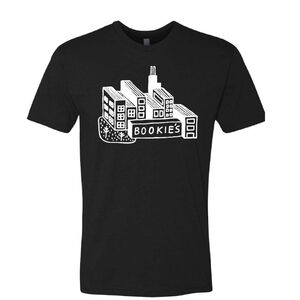 T-shirts that promote Bookie’s New and Used Books are being designed by local artists in a fundraising effort to support the longtime bookstore in Beverly. Sweatshirts and long-sleeve shirts are also available. 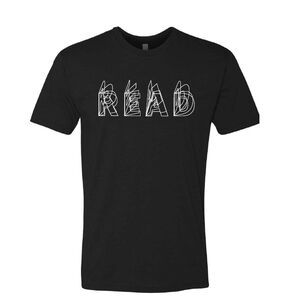 This shirt, designed by artist Kristen Dobbins, of Beverly, is available through the fundraiser. Marathon Sportswear, of Blue Island, and Bonfire, an online custom design shirt company, are producing the apparel. Each item features the Bookie’s logo.

T-shirts that promote Bookie’s New and Used Books are being designed by local artists in a fundraising effort to support the longtime bookstore in Beverly. Sweatshirts and long-sleeve shirts are also available.

This shirt, designed by artist Kristen Dobbins, of Beverly, is available through the fundraiser. Marathon Sportswear, of Blue Island, and Bonfire, an online custom design shirt company, are producing the apparel. Each item features the Bookie’s logo.

In trying to recover from the financial crisis caused by COVID-19, Bookie’s New and Used Books is turning to a collaboration with local artists for a T-shirt campaign to promote the longtime bookstore.

Featuring shirts with the Bookie’s logo surrounded by iconic Chicago landmarks and other imagery, the online campaign will launch on Friday, Oct. 30.

Bookie’s Owner Keith Lewis admitted that the last several months have been difficult.

“It’s been hard through this,” Lewis said. “There’s been not a lot of money coming in for a while. It was a little bit of an issue, especially during the total shutdown.”

The shirts, which are also available in long-sleeve and sweatshirt style, cost between $20 and $40.

Local artists Kristen Dobbins and Mairead Zigulich designed the shirts, along with Nate Otto, an artist and muralist from Chicago.

One shirt features the Bookie’s storefront with the Willis Tower, the “Bean” and other popular city attractions in the background, and another features the message “READ” in 3-D lettering.

Lewis knew Dobbins and Zigulich through local arts events, and after Otto posted on a local Facebook group explaining his work, Lewis contacted him.

“I just wanted to get something really hyperlocal,” Lewis said. “I looked at [Otto’s] stuff, and it was so cool that I just asked him. And he said, ‘It’s important to have a bookstore in your neighborhood.’”

Lewis used imagery from the Midwest Independent Bookseller’s Association’s roadmap of bookstores in Illinois and surrounding states to design the shirts.

Every shirt features the Bookie’s logo—a red, white and blue star—on the back.

Early in the public health crisis, he kept only online and curbside services open, and he was the only employee at both stores.

For about three months, he said, sales were at 20 percent of what they normally are.

“That was a really bad summer,” Lewis said. “And it was really scary. I was within, I would say, 300 bucks of running out of money completely. Nothing stopped as far as bills and rent and that kind of stuff. I managed to be very conservative in my ordering, and I’m still being pretty conservative in ordering, though I’m starting to try really hard to get some stuff going, to get in some stock for the holidays.”

Lewis is still “very much in recovery mode,” he said. Other bookstores ran GoFundMe campaigns, but he decided against that.

This fundraising opportunity, however, fit the bill.

“I thought this sounded like a good idea because people could end up with something really cool out of it,” Lewis said. “And, I won’t get as much from it probably because obviously these companies need to get their share.”

Bookie’s is open for in-store browsing now, and Lewis hopes to take advantage of the upcoming shopping season.

After spending the last five years expanding the Bookie’s brand, he wants the store to continue to thrive.

“I’m trying to stock up for Christmas, so customers have gifts to come and get,” Lewis said. “And then, I’ll have to pay those bills afterward.

“But, I’m constantly playing catch-up right now with these invoices and everything because I want to stick around.”