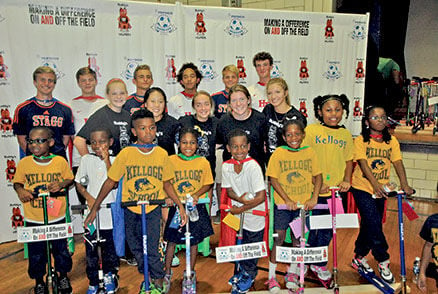 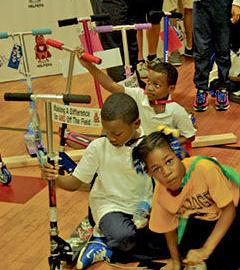 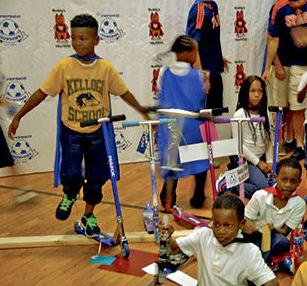 And with the overture for “Star Wars” playing, the surprise was unveiled, and students cheered with elation.

Students in kindergarten through third grade at the North Beverly school were surprised with scooters on Sept. 20, courtesy of the PepsiCo Showdown, a major high school soccer tournament featuring dozens of schools from the Chicago area.

According to organizers, 110 scooters were presented to students.

Overstreet said the donation represents a perfect example of his school’s theme the year: be kind.

“I think it’s a perfect lesson to be kind,” Overstreet said, “and how people are kind to you and how you can give back.”

The tournament has a theme of “Pay it Forward” and encouraging “random acts of kindness.” In June, Whitney Young High School senior Madison Ekern was presented with a new 2016 Jeep Wrangler a part of the spring challenge of “Making a Difference On and Off the Field,” and other students from Whitney Young, as well as Andrew and Sandburg high schools, were surprised with free tickets to the B96-FM Jungle Bash last January.

This month, the tournament donated more than 3,000 pairs of shoes to the Franciscan Outreach homeless shelter.

On Sept. 17, players from 64 schools around Chicago were downtown on Michigan Avenue to perform random acts of kindness, and according to tournament organizers, they wore superhero capes to show that they are “superstars off the field.”

Players from Marist, Stagg and Homewood-Flossmoor high schools were on hand for the presentation at Kellogg, and students also donned superhero capes. Marist students said they didn’t know what to expect, but they enjoyed their experience.

To start, a handful of students were called up to a row of about five scooters. Then, they were told to pick classmates to receive the scooters.

Moments later, a curtain was lifted to show that every student at the event would be getting a new ride.

“It was really nice helping everyone out,” said Marist sophomore Amaya Knoll, of Alsip.

The Marist girls soccer team played in the PepsiCo Showdown last year, and they will participate again next season.

As for Kellogg, Overstreet said he planned to distribute the scooters to students by the end of the week. PepsiCo Showdown Founder Joe Trost contacted him on Sept. 16, he said, and he was able to keep the scooters a surprise until the assembly, even with organizers unloading them off U-Haul trucks early that morning.

After the event with several TV media present, he said he was happy for his students—but he wants to make sure they remain committed to being kind to others.

“I think this is one of those events that kids will remember, especially with the cameras here,” Overstreet said. “It’s a really cool event, and I’m excited. The teachers are going to do a ‘pay it forward’ event, and [I’m excited to see] what ideas they come up with on how they can pass it along.”