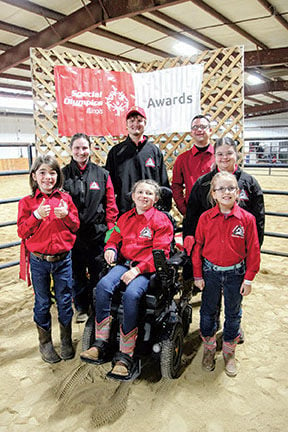 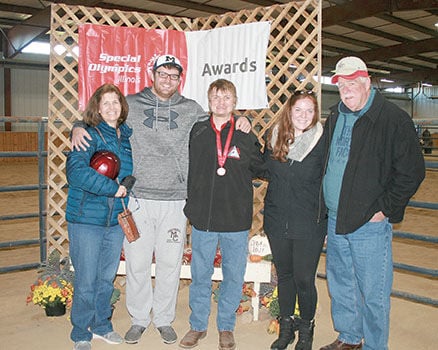 The Holistic Riding Equestrian Therapy (HRET) team, a 501(c) 3 organization, once again had riders showcasing their skills and hard work at the 2018 Special Olympics. The Equestrian Fall Games were held on Oct. 20 and 21 at BraveHearts Therapeutic Riding facility in Poplar Grove, Ill.

Mt. Greenwood resident Shane Blake, riding independently on Teddy, executed an exceptional performance earning a silver and bronze medal. Blake has been riding for six years and three with HRET.

“Since riding, Shane is more outgoing,” said his father, Patrick Blake, battalion chief for the 19th Battalion, in Englewood. “Shane enjoys his team mates and the camaraderie, and asks me five times a week ‘are we going to the barn Tuesday?’ He has really bonded with his team of volunteers and looks forward to seeing them.” Marlene Karman, HRET executive director, said, “Shane’s self-confidence has increased significantly due to his heart connection with Teddy and his new responsibility of caring for him.”

All three junior riders, Amelia Kulaga, Nigel V. and Isabel Merrion had a blast, and all came away with medals, ribbons and smiles. First-time competitor Merrion dazzled the crowd winning a gold medal in the working trails class. She spent the balance of the weekend visiting every team members’ room in her motorized wheel chair knocking on doors, proudly wearing her medal and sharing her excitement.

Special Olympics second-year competitor, Maggie Kendryna, from the District 218 Adult Transition Program, did a performance winning a first-place medal in working trails on Holly, and a second in stock seat equitation.

Jeremy Geary was introduced to HRET while attending Lifestyles Academy, in Palos Park. A rider of only five months, he brought home a silver and bronze medal on Houston.

His mom said, “It [the program] has given him confidence and the horses have a calming effect on him. It gives him something to look forward to every week and a goal to work on. You guys made all the difference to him!”

The HRET Special Olympics training started in July and culminated in a weekend of laughter, hugs, tears of joy and a shared sense of team pride and individual accomplishment.

Dr. Sue Feeney, assistant superintendent of special services and instructional engagement with District 218 and Marlene Karman, executive director of HRET, had a vision. Together they developed a pilot program, which incorporated the healing powers of Equine Animal Activity Therapy and a hands-on farming component. The positive impact this program has had on their students physically, emotionally, cognitively and socially has been measurably impressive, making the HRET riding program a permanent part of their curriculum. More than 20 students are bused to the historic farm weekly.

Volunteers and support make all the difference. For more information, email holisticriding19@gmail.com or visit holisticridingtherapy.org.

HRET’s next volunteer training dates start in November. In addition, HRET is in need of pro bono legal, accounting and grant writing services, as well as horses to maintain this life-transforming program in 2019.

The HRET program is designed to improve the quality of life physically, emotionally, cognitively and socially for children, teens and adults with special needs and veterans. HRET offers a variety of skill appropriate classes meeting the needs of preschoolers on ponies to independent riders on program safe horses.

Semi-private and private lessons are offered year-round with group classes conducted March-December. To schedule a rider’s intake interview and reserve a place in the 2019 program, email holisticriding19@gmail.com. The program fills up quickly.