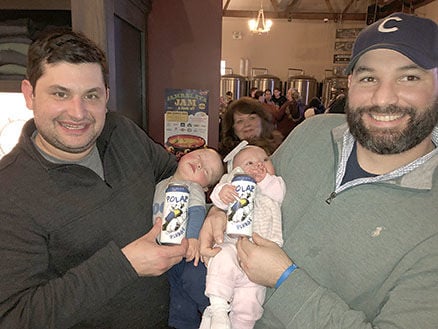 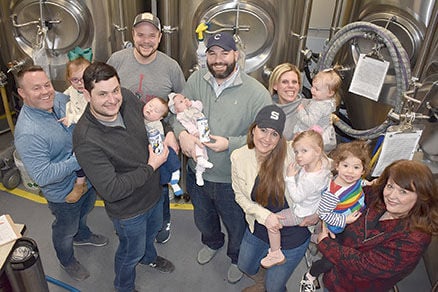 Packy McGowan and Joe Panatera enjoy the moment with their families, friends and Horse Thief Hollow Brewing Co. owner Neil Byers (third from left), on the first night that the Polar Plunge beer was available for purchase. Panatera and Byers graduated from Mt. Carmel High School in 2001. Although raising a child with special needs was daunting at first, McGowan and Panatera said, they’re grateful for the support of their wives—and from other parents who have shared advice, gifts and books. (Review photo)

Packy McGowan and Joe Panatera enjoy the moment with their families, friends and Horse Thief Hollow Brewing Co. owner Neil Byers (third from left), on the first night that the Polar Plunge beer was available for purchase. Panatera and Byers graduated from Mt. Carmel High School in 2001. Although raising a child with special needs was daunting at first, McGowan and Panatera said, they’re grateful for the support of their wives—and from other parents who have shared advice, gifts and books. (Review photo)

Packy McGowan and Joe Panatera have been friends for over 20 years.

Their friendship will only grow closer for the rest of their lives now that they’re parents of infants with Down syndrome who are almost the same age.

Together with their wives, friends and family on March 3, the two will participate for the first time in the Chicago Polar Plunge, which supports Special Olympics Chicago and athletes with special needs.

Their team is Marty and Reese’s Warriors, named after McGowan’s son and Panatera’s daughter, respectively, and Horse Thief Hollow Brewing Co. debuted a new beer, called Polar Plunge, on Feb. 15 in celebration of their team.

McGowan credited Panatera, who is friends with Horse Thief Hollow owner Neil Byers, for generating significant awareness for their team. They enjoyed the beer together on opening night.

“Joe got on board, and things really started moving,” McGowan said. “He’s the reason that we’re drinking the beer today.”

McGowan, of Beverly, and Panatera, of Morgan Park, both attended Mt. Carmel High School. McGowan graduated in 2000, with Panatera graduating in 2001, along with Byers.

A native of Beverly, Byers often brews special beers for charitable causes. He joined the McGowans, Panateras and their friends in brewing Polar Plunge, described as malty, balanced and smooth, in early December. It is available in cans featuring the logo of a polar bear on a floatation ring.

Panatera said he is grateful to Byers for backing their cause.

“Neil’s the reason,” Panatera said. “We just asked, and he said yeah.”

Marty McGowan was born on Aug. 8, 2018, and Reese Panatera followed on Sept. 21. Marty’s mother is Amy McGowan, and Reese’s is Deanna Panatera.

Each child has older siblings, so their mothers and fathers were experienced parents.

The fathers admitted that being told they would welcome a child with special needs was nerve-wracking, but only for a moment.

“It lasted about a day, and then I was more excited to really get into all this other stuff that we’re going to get into, like Special Olympics, the path we’re going to take, what we’re going to be involved in with the community. How cool it is,” Panatera said. “It was a day of ‘Oh, my god,’ and then the next day, I was like, ‘Let’s go.’”

McGowan credited his wife, who was not at the beer release, for being the leader of the family. Supporting the Polar Plunge has inspired him.

“I feel like my wife dove head on into all of this, and I kind of didn’t,” McGowan said. “This helped me to be able to do something.”

Dan Letz, a Morgan Park native, and Morgan McGarry, a Beverly native, also attended Mt. Carmel and have organized other boxing fundraisers. Within two days of being asked, McGowan and Panatera said, the two had scheduled another one.

McGowan and Panatera also credited friend Matt Hayes, of Morgan Park, for connecting them to share information about raising a child with Down syndrome. Hayes also introduced the two to Letz.

Hayes joined his friends for the Polar Plunge beer debut and also plans to dive into Lake Michigan.

“It’s the whole neighborhood coming together for two families from the neighborhood,” Hayes said, “for one cause.”

The McGowan and Panatera families plan to celebrate after the plunge with a party with family and friends, and they’re grateful for all the people they didn’t know before their children were born and who have supported their families.

As he awaited his daughter’s arrival, Panatera said, other people who have raised children with special needs began reaching out with advice and gifts.

“They started sending us books and packages,” Panatera said. “It was amazing what the community of special needs did after they found out. It was awesome.”