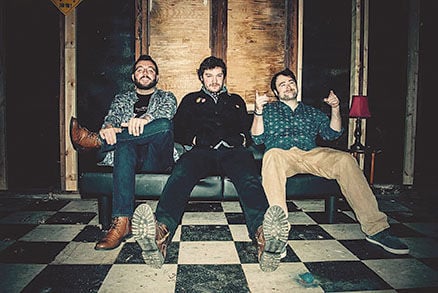 Matt Fricks (from left), Brendan Folliard and Sean Wilmsen, all Beverly/Morgan Park natives, comprise the Railway Gamblers, an Americana rock band they formed in 2014. They will release their fourth album, “Lover,” on July 27. They have performed at local venues. 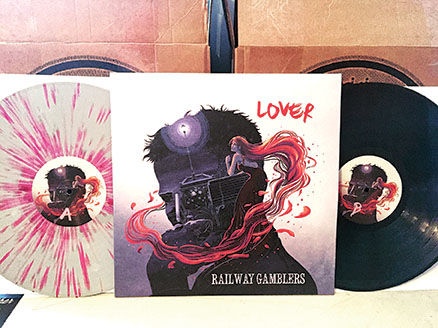 “Lover” consists of 12 tracks and is the first album the Railway Gamblers have released in a vinyl edition. The band will play at Schuba’s Tavern, 3159 N. Southport Ave., on July 29, as well as the Beverly Arts Center this fall. Band members have been friends for many years and worked on the album while housemates in Merrionette Park.

Matt Fricks (from left), Brendan Folliard and Sean Wilmsen, all Beverly/Morgan Park natives, comprise the Railway Gamblers, an Americana rock band they formed in 2014. They will release their fourth album, “Lover,” on July 27. They have performed at local venues.

“Lover” consists of 12 tracks and is the first album the Railway Gamblers have released in a vinyl edition. The band will play at Schuba’s Tavern, 3159 N. Southport Ave., on July 29, as well as the Beverly Arts Center this fall. Band members have been friends for many years and worked on the album while housemates in Merrionette Park.

They formed their band barely four years ago, but they’re set to release their fourth album.

The Railway Gamblers, an Americana rock band comprised of local natives who often perform at local venues, are taking the neighborhood music scene by storm.

The band will release “Lover,” a 12-track album, on July 27, when it will be available in vinyl and CD and through online streaming applications.

As they gear up for a summer tour to promote the album, the Railway Gamblers believe their latest release offers a little bit of everything they’ve played.

“I think it’s kind of like an accumulation of the first three records,” said lead guitarist Matt Fricks. “Our first album was sort of our indie/folk roots [edition]; our second was sort of our gritty rock album. The third one had more of atmospheric sound. And, I think if you put those three elements together, you kind of have this one.”

All 26 years old, they began performing in March 2014, playing shows just a few weeks after becoming a band.

“Lover,” band members said, features more electric guitar than did past albums. They pride themselves on writing original songs, instead of relying on cover songs, and Folliard, who also plays guitar and piano, takes the lead role in songwriting.

Band members feel the band can establish itself better if they perform original material.

“When you have a songwriter like Brendan who keeps churning out songs, you’ve got to keep going with original stuff,” Fricks said, “and make a name for yourself.”

The band played its first show at Harte’s Saloon in Evergreen Park, and the musicians now consider Harte’s as their home base, but it has performed at North Side bars, including Joe’s on Weed Street, and will perform around the Midwest this year.

“We try to play up north a lot. Our age group of people are kind of moving up there,” Wilmsen said. “We’re not—because we like where we’re at down here. But, we like going up there. I would say that’s where the majority of our fans are living now. But, we still have a great South Side following.”

Wilmsen said that, when he was young, he dreamed of forming a country rock band. He has been friends with Folliard since they attended kindergarten together at St. John Fisher Elementary School (SJF), and Wilmsen paired up his musical talents with Fricks’ when the two attended Br. Rice.

Their friends Joe Sexton, who also attended SJF, and Dan Kane have also performed with the band, both taking turns on bass in “Lover.” Mike Hagler, a music engineer who has worked with bands such as Wilco and My Morning Jacket, assisted in the production of the album and plays keyboards.

Folliard said “Lover” touches on the difficult emotions that come with love.

“You take yourself on that ride sometimes,” Folliard said. “It’s about falling in love—having it there, but you can’t reach it and hold it.”

Folliard wrote the track in five minutes, he said, and the band recorded it in one take.

The group completed much of its work while living together in a home in Merrionette Park. They spent many weekends piecing together their ideas, and it wasn’t always easy.

“Lover” will be available for purchase at Beverly Records, 11612 S. Western Ave., and available online through iTunes and Spotify. The vinyl edition includes information on how to download the record for free.

The band uses proceeds from shows to fund more projects. Wilmsen said he’s never played with a band that’s so dedicated, and he and his friends aren’t interested in making a profit for their work.

“We just like doing this,” Wilmsen said. “There’s nothing in the world that’s better than making music with your friends.”

Still, they need to make a living. Wilmsen is a sales representative for Founders Brewing Co., and Folliard is a bartender at O’Rourke’s Office in Morgan Park. Fricks is a teacher. Band members put as much time into their music as they do their careers, they said, but they aren’t complaining.

Listen to one of the album's songs, entitled "Save Me," here