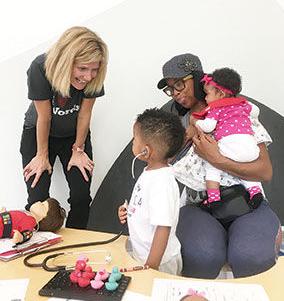 Michelle Dinneen-White (left) enjoys a moment with Patricia McMillan and her two children during a play session at HelloBaby, a non-profit organization in Woodlawn that supports underserved children. Dinneen-White visited as part of the work she does for Play Smart Literacy, a non-profit she founded that works with children and families. (Review photo) 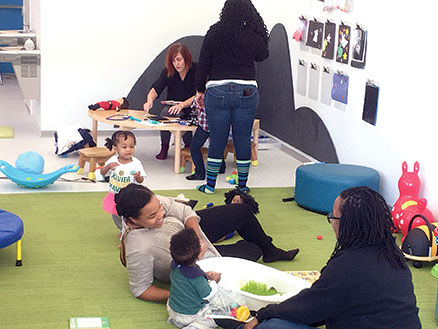 Children and caregivers enjoy an activity at HelloBaby during Michelle Dinneen-White’s visit. She has a small staff at Play Smart, including Stacey Grieff (left), but Dinneen-White is not paid. After a play session, she will text families regarding continued activities and children’s development. (Review photo)

Michelle Dinneen-White (left) enjoys a moment with Patricia McMillan and her two children during a play session at HelloBaby, a non-profit organization in Woodlawn that supports underserved children. Dinneen-White visited as part of the work she does for Play Smart Literacy, a non-profit she founded that works with children and families. (Review photo)

Children and caregivers enjoy an activity at HelloBaby during Michelle Dinneen-White’s visit. She has a small staff at Play Smart, including Stacey Grieff (left), but Dinneen-White is not paid. After a play session, she will text families regarding continued activities and children’s development. (Review photo)

Michelle Dinneen-White is seated in a circle with several women, each of them with infants or toddlers in their laps. They sing songs, play with toys and enjoy fun activities.

It’s a day in the life for Dinneen-White, a Beverly resident who founded Play Smart Literacy three years ago.

Dinneen-White does her work for free, although she pays three staff members.

Her organization started, she said, when she noticed a lack of daycare centers and preschools around the South Side.

And it’s a perfect fit for her.

“It’s everything I love,” Dinneen-White said. “I love the parents; I love working with the children.”

On Oct. 26, Dinneen-White visited HelloBaby, a non-profit drop-in space in Woodlawn for newborns to 3-year-olds. Parents and caregivers can bring children to HelloBaby for an hour or two of free play, and Dinneen-White brought small toy ducks to play with during a sing-a-long.

The interaction lasts beyond a short play session. Dinneen-White texts parents offering ideas, and parents are encouraged to send photos of their children utilizing skills they learned after a play session. Play Smart also maintains a page on Pinterest, a social-networking site where people share ideas and activities, and Dinneen-White utilizes ReadyRosie, an online program focused on communication and language development for children, to help families and teachers work together.

Each week, Dinneen-White visits locations, many of which are utilized by families in need, and she’ll bring an array of toys that she keeps at home. Her stops include Trumbull Park Homes, a Chicago Housing Authority site in South Deering; Tolton Family Literacy, a program in Little Village in which caregivers primarily speak Spanish; and Creative Little Ones learning centers at 59th Street and California Avenue and 95th Street and Halsted Avenue. She has also worked with Beacon Therapeutic Diagnostic and Treatment Center in Beverly, and she hopes to work in the future in nearby suburban Robbins.

Dinneen-White met the founder of HelloBaby, Debbie Frisch, after reading a media report about the non-profit, which Frisch opened July 10.

Frisch transformed her facility from a daycare center into a bright, open space. Toys are scattered throughout the room, and there’s a cushioned space near the front window where babies can enjoy “tummy time.”

Her facility welcomes caregivers ranging from parents to grandparents to Department of Children and Family Services employees.

“The kids love it,” Frisch said. “She’s so gentle and sweet.”

Patricia McMillan brought two children—her 2-year-old son and 3-month-old daughter—for the recent play session. After the sing-a-long, her son played with a toy thermometer. McMillan is a stay-at-home mom, and she utilizes HelloBaby as a social activity for her son—she also enjoys Dinneen-White’s visits.

“We love it,” she said. “It’s an added bonus with Michelle’s play dates.”

Dinneen-White has an extensive background in education. She taught at Bowen High School in South Chicago, as well as south suburban Homewood-Flossmoor High School.

She raised five daughters who all attended the Beverly Castle preschool and St. John Fisher Elementary School, and she said they enjoyed “such a great experience.” So, she “always wanted the same for everyone,” and she started Play Smart, which has been funded through grants.

One focus of her organization, she said, is to follow the work of Dr. Dana Suskind, a cochlear-implant surgeon at University of Chicago Hospital who founded the “30 Million Words” initiative. That campaign focuses on children’s communications skills, noting a 1995 study that reported that children who hear 30 million words by their fourth birthday are better prepared to enter school.

“She wants it to be a movement and really spread throughout the nation,” Dinneen-White said, “so that’s what I’m trying to do. … I almost see myself as a foot soldier for her.”

Dinneen-White was joined by staff member Stacey Grieff during the visit to HelloBaby, and her other employees have a background in education.

She also hopes new teachers, such as college students studying education, will seek to work for Play Smart.

“We want the best and the brightest,” Dinneen-White said, adding, “This is where we want the ‘A’ team.”

Dinneen-White is grateful for the impact her program has after the play sessions finish. Recently, she said, a father texted her about a Play-Doh activity, saying he was headed out to purchase some for his child.

On another occasion, after Dinneen-White sent children home with bubbles and told caregivers to text a photo of the child playing with the bubbles, a parent did just that.

“We just really know,” Dinneen-White said, “we are making that connection.”

Giving Tuesday, in which people donate to various causes and charities, will be Nov. 28, the Tuesday after Thanksgiving, and Dinneen-White hopes people will donate to Play Smart.

Money aside, Dinneen-White has the energy needed to continue her campaign.

She feels she has found her calling.

“It is my passion,” Dinneen-White said. “I am crazy about it.”