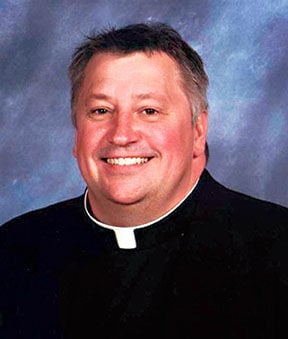 The parishioners of St. Cajetan Roman Catholic Church will bid farewell to their pastor and welcome a new leader.

The Rev. Frank Kurucz, who has been pastor for over 12 years, will leave St. Cajetan at the end of June and become pastor of St. Michael Roman Catholic Church in Orland Park.

St. Cajetan is the first parish of which Kurucz served as pastor, and while he is not a native of Morgan Park, he quickly discovered he had much in common with the community.

Kurucz became St. Cajetan’s 10th pastor in November 2005, and he said he has enjoyed his years in the parish.

“It’s a wonderful community,” Kurucz said. “It has been really just a humbling experience to be able to shepherd the people at St. Cajetan.”

When he became pastor of St. Cajetan, Kurucz didn’t know much about the parish, he said; the little he did know came from people associated with Mt. Carmel High School, his alma mater.

“They work very hard,” Kurucz said. “They have a great spirit of community, devotion and being there for each other, especially during terrible tragedies. … There are so many connections with people in this neighborhood. It is really remarkable.”

Kurucz was ordained on May 23, 1998. He has a bachelor’s degree in accounting from the University of Illinois at Urbana-Champaign. As a certified public accountant, he worked for eight years in that field before joining the seminary.

Among the recent achievements of St. Cajetan parish is its success in raising funds in the Archdiocese of Chicago “To Teach Who Christ Is” campaign, which supports major projects at parishes.

According to the archdiocese, St. Cajetan surpassed its goal of $820,000 by at least 23 percent, a number that would bring a smile to pastors and accountants alike.

Those funds went toward purchasing new windows and removing asbestos from the school, installing air conditioning in the gym, installing a baptismal font and digital organ in the church, and building a meditation garden dedicated to St. Mary in a courtyard.

According to an archdiocese publication from January 2017, Kurucz expressed concerns about asking parishioners to raise such a large amount money, but parish finance committee member Mike Stanton said that the request was “easy as long as you have a good goal and you believe in it.”

Being straightforward with people, Kurucz said, was key to the campaign’s success.

“Just being honest with people,” he said, “and just telling them what we needed.”

Dombrowski has been associate pastor of St. Francis of Assisi for nearly three years. For six years prior, he was pastor of the parish of St. Raymond Roman Catholic Church in Mt. Prospect.

Dombrowski said that, in preparation for his assignment, he attended Mass twice at St. Cajetan. He enjoyed the first one so much that he went again.

“I was just comfortable there. I felt just a great energy in the parish,” he said. “It’s not overly huge, and yet the school is thriving. It’s got a great [enrollment] number. The school always adds to the energy of the parish, and that’s always a good thing.”

Dombrowski announced his new assignment to St. Francis of Assisi parishioners during the weekend of March 10-11, and he said they offered positive comments about St. Cajetan.

Archdiocese officials asked Dombrowski to list four parishes of which he would consider becoming pastor, he said, and he feels fortunate to be at St. Cajetan.

“I really feel that, out of the four, St. Cajetan was really the best choice,” Dombrowski said. “I was really thrilled.”