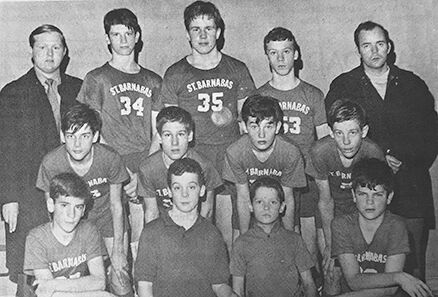 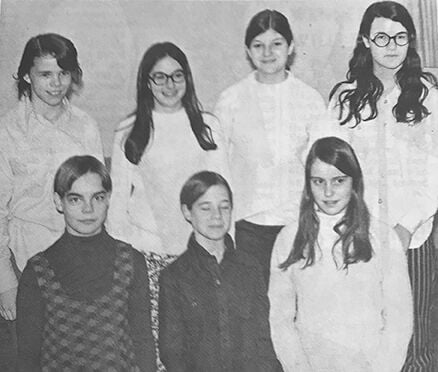 When the St. Barnabas Elementary School Class of 1970 gathers for their 50th (+1) reunion on Sept. 25, among the memories will be the sports teams that were named the Buckeyes. Those include members of the Class of 1970 volleyball team, Jeanie Barrett (front, from left), Mary Green, Therese Groble, Sherry McGowan (back row, from left), Patty Moore, Candy Sheridan and Sue Meyer.

When the St. Barnabas Elementary School Class of 1970 gathers for their 50th (+1) reunion on Sept. 25, among the memories will be the sports teams that were named the Buckeyes. Those include members of the Class of 1970 volleyball team, Jeanie Barrett (front, from left), Mary Green, Therese Groble, Sherry McGowan (back row, from left), Patty Moore, Candy Sheridan and Sue Meyer.

Members of the St. Barnabas Elementary School Class of 1970 will celebrate their official 50th (+1) reunion on Sept. 25 with a Mass and school tour, followed by a party later that evening at Ridge Country Club.

For the Class of ’70, which includes this author, preparing to celebrate the occasion brought back many memories. Here’s some of the things I remember.

In 1969, we met in the Social Hall at St. Barnabas to decide what to name our sports teams. It had been narrowed down to three choices: Buckeyes, Boilermakers and Baboons.

The buckeye is a nut that doesn’t grow here, so many were hopeful for Boilermakers. Many years later, it came out that none of the cheerleaders would ever vote for a four-syllable nickname, and my homeroom teacher told us that Baboons would never win; so, Buckeyes it was.

Our football team went undefeated in the regular season and beat Queen of Martyrs to advance to the championship game.

The Beverly Review published a story back then about our team.

“The Barnabas Buckeyes,” the article reported, “have never before had a year like 1969!”

Unfortunately, our two best running backs, Dan Rowan and Tom Daker, were injured, as were our left tackle, Denis Mitchell, and end, Matt Somerville. Had we been healthy, the score would have been closer than the 62-14 loss we suffered.

Our opponent, St. Christina, was also undefeated and had QB Brown, WR Stark and a large lineman who was rumored to drive to games with his wife and kids.

The game was played at Evergreen Park High School and was quite disappointing.

A post-game victory party was planned for the Social Hall, but since both Mitchell and I were on crutches, we decided to take a pass.

Mr. Mitchell went by and saw all the cars and insisted we go. We bounced down the stairs to the beat of The Temptations and saw our safety, Mike Padden, dancing wildly.

After ten minutes of general merriment, I asked my friend Jim Garrity, “Wait, didn’t we lose?” Quick rebound at that age.

Our seventh-grade basketball team finished with 3 wins in the Mt. Greenwood league. We were coached by two high school juniors, and we had seven orange jerseys. When Charley Cullinan joined as our eighth player, he had to wear a yellow jersey.

Including the young coaches, there were enough guys to practice 5-on-5, and our head coach, Dunc Connors, often pretended that he was Sammy Puckett, a great guard from Hales Franciscan High School.

Hopes were higher for our eighth-grade team, as the football coach, Mike Lux, would also be coaching B-ball. There were 20 players, enough to field two teams at Ridge Park. The A team beat St. Margaret for the Ridge Park championship, but earlier, we had lost to them in the Leo Tournament.

Lux reacted badly to that loss, breaking a chalkboard and calling practice the next day for 6:30 a.m. My dad was going to 6 a.m. Mass; so, I got a ride, and what a wild morning it was.

Lux brought his fraternity paddle and whacked us for various mistakes—such as missing a lay-up at the end of a figure-8 drill, and all three guys got it. Also, if a player wasn’t wearing a jockstrap—that was everybody but Kevin Finn. But, Finny got it too because he was also wearing underwear. We lost our best player that day, Joe Walsh, who decided it was too much.

March Madness had arrived, and we made it to the Southwest Conference championship against Queen of Martyrs. The season series was close, but the Buckeyes were favored.

The game was played on a Sunday at Quigley South (now St. Rita), and we arrived at noon—five hours before game time. We spent two minutes looking around the gym, then went to the rec room where we played poker and ping pong and shot pool—all for money.

When it was time to warm up, our point guard, Daker, was playing Coach Condon in ping pong. If Dakes won, he got $5, and if he lost, he had to kiss somebody. He won the $5, and most of the time for warm-ups was spent discussing who was up at cards and who was the best at pool.

The basketball game started, and we were quickly down 13-4 and never caught up. It got closer, but Martyrs prevailed.

I don’t think there was a victory party this time, but there was an Evening of Recognition for the players and the seven cheerleaders. One of the girls, Kay Campbell, wrote a poem, “Ballad of the Buckeyes,” featuring the line, “A transistor moans out blues-haunted jazz …”—classic.

We had several volleyball teams. There were two teams in the Ridge Park league, and Joanie Knight captained the team that played in the Southwest Conference. Ron Eastman coached that team, and one of the seventh-graders, Peggy O’Keefe, went on to play travel volleyball and earn a scholarship to Pepperdine University.

Decades later, there are still Buckeye football, basketball and volleyball teams. Although some are missing, many will gather at Ridge Country Club for the reunion and swap stories and lies. The Buckeyes will shine that night.

For this article, special thanks go to Maureen Linehan and Mary Green and to Kevin Doherty and Mike Padden for their deep dive into the archives of The Beverly Review.