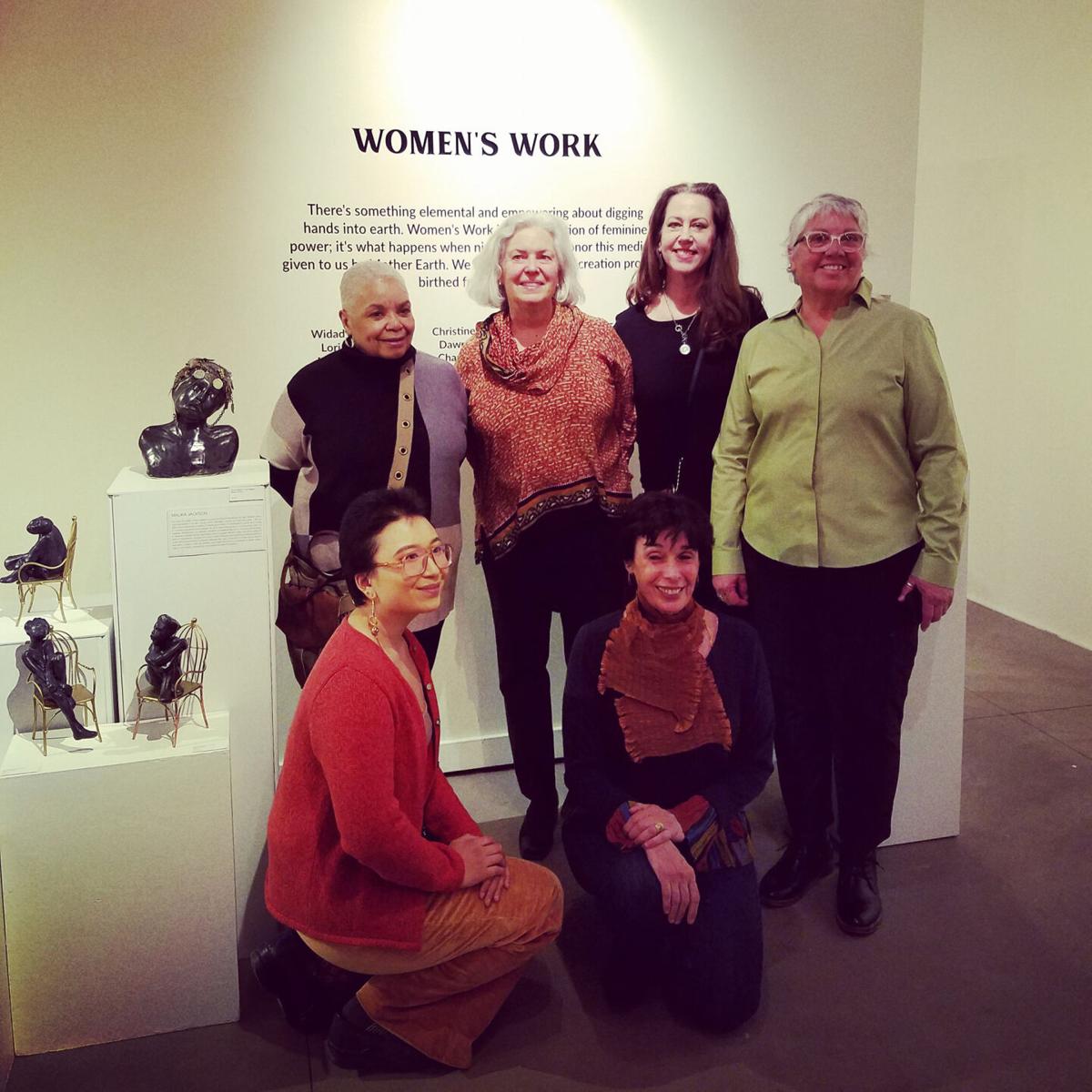 Artists featured in “Women’s Work” at the Beverly Arts Center enjoy the moment at the exhibit’s opening in March before the temporary closure due to the pandemic. The free exhibit is open and continues until Sept. 17. It features Tran Tran (from left), Charlotte Mays, Lori Bartman, Widad Albassam, Dawn Liddicoatt, Cheryl Ann Williamson and (not pictured) Malika Jackson, Mary Cat Tepper and Christine Liz LaRue. 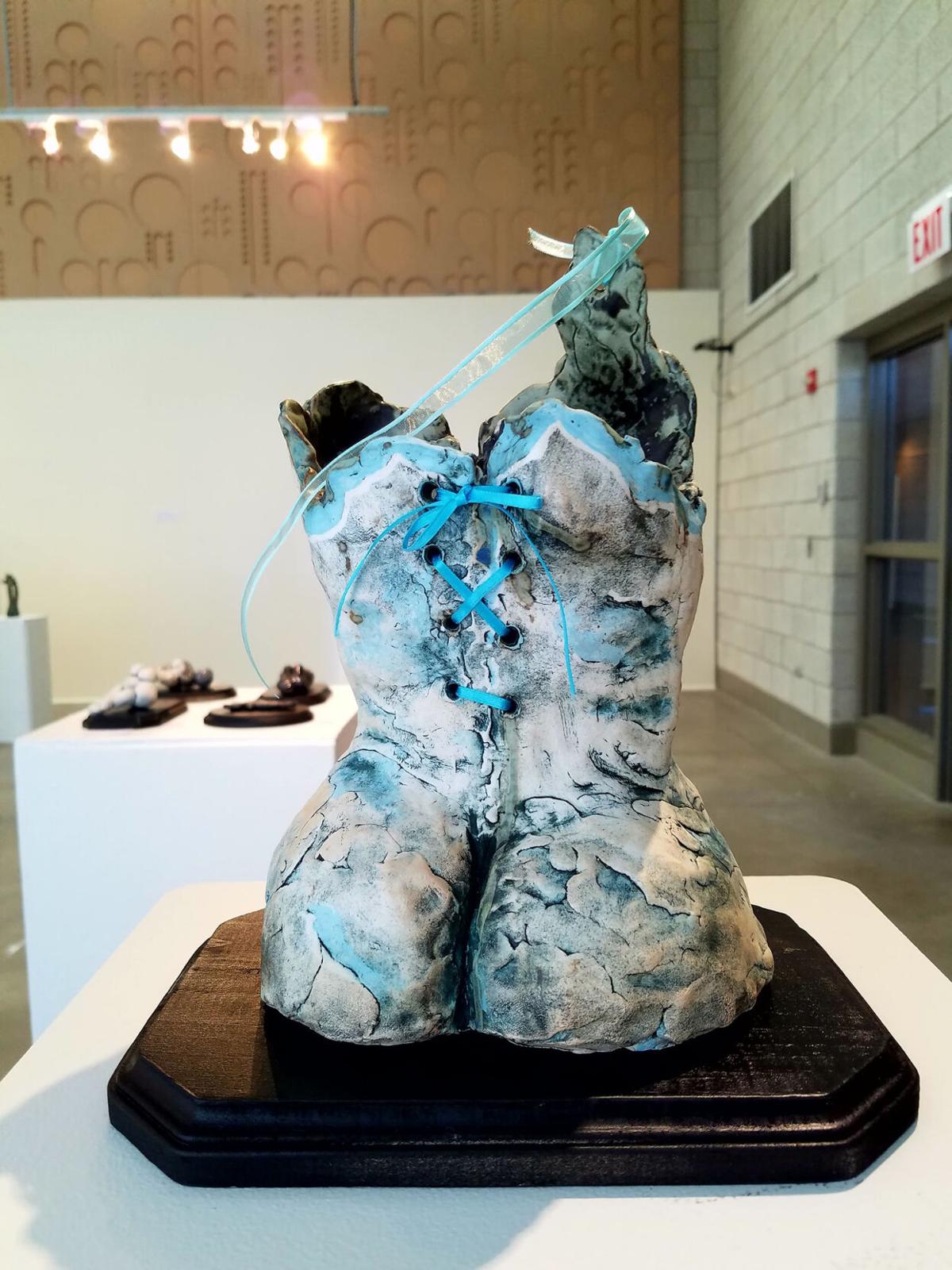 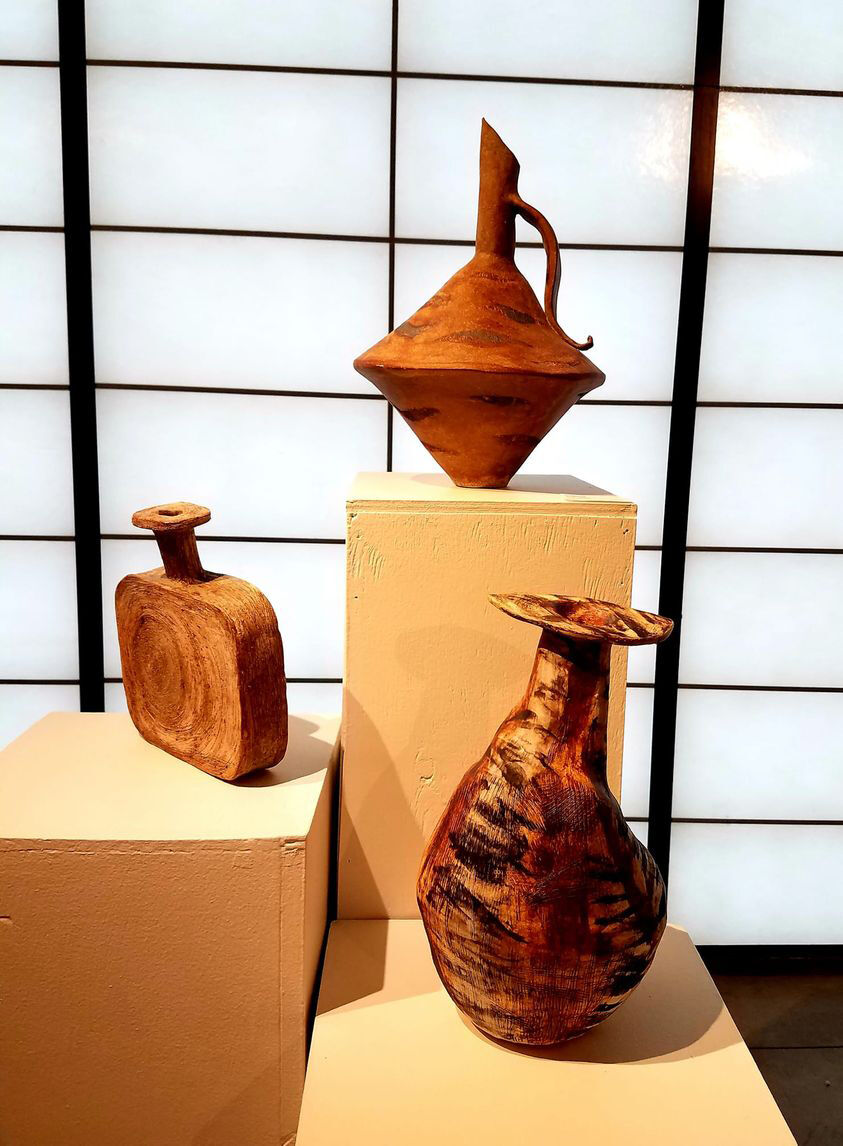 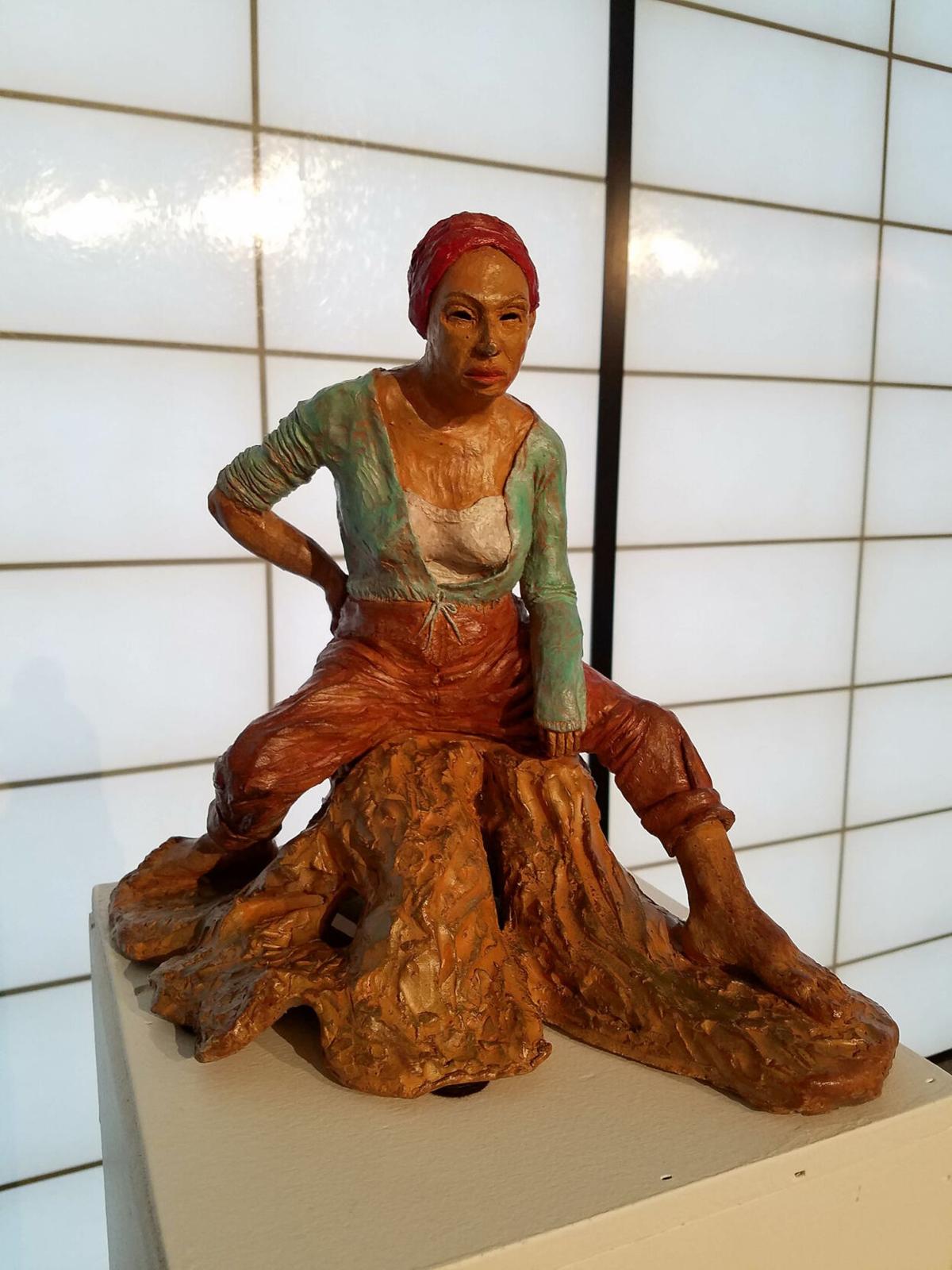 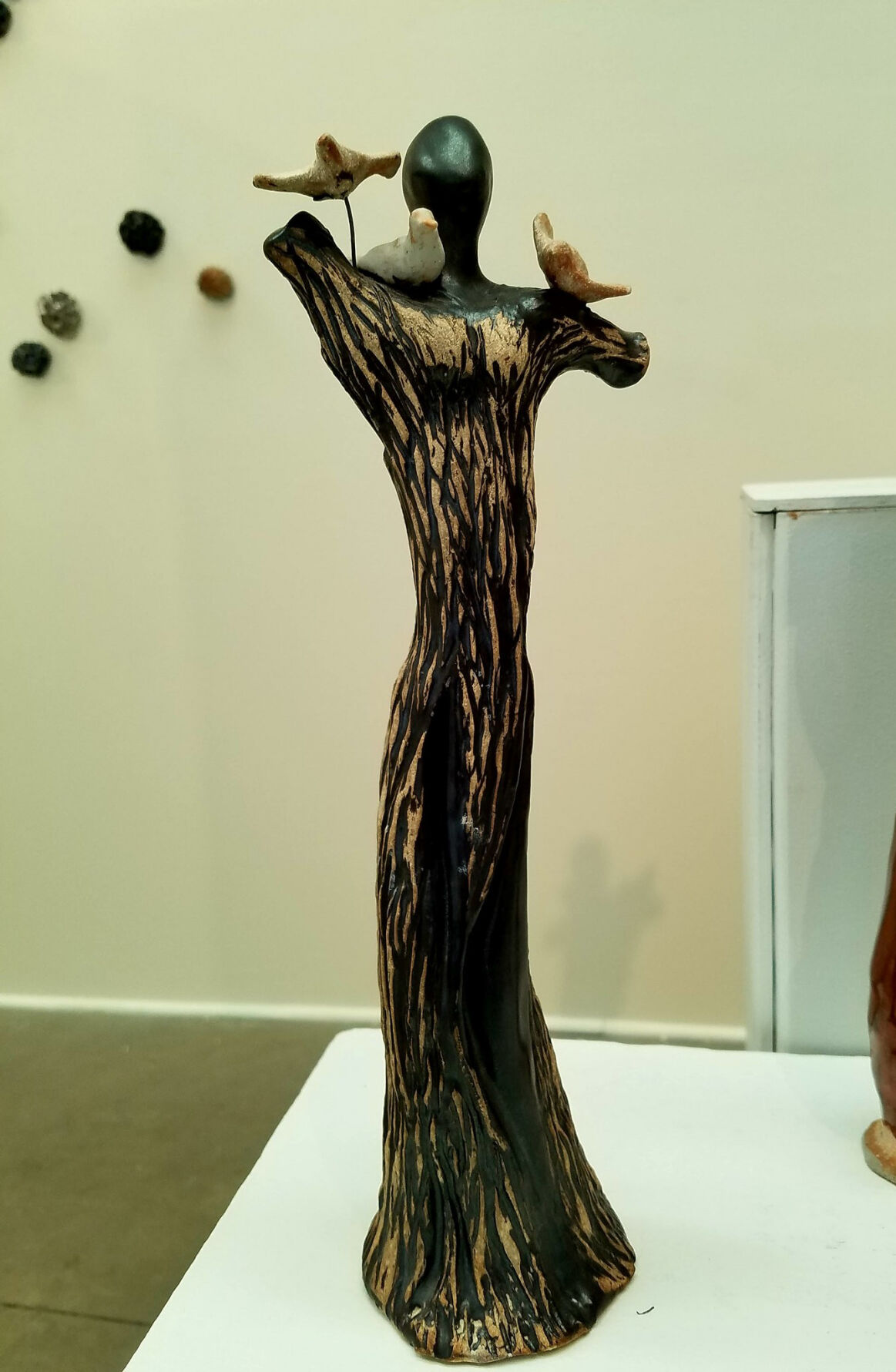 A “tree person” sculpture by Cheryl Ann Williamson. Nature is the inspiration for Williamson’s work. (photos by D. Liddicoatt)

Artists featured in “Women’s Work” at the Beverly Arts Center enjoy the moment at the exhibit’s opening in March before the temporary closure due to the pandemic. The free exhibit is open and continues until Sept. 17. It features Tran Tran (from left), Charlotte Mays, Lori Bartman, Widad Albassam, Dawn Liddicoatt, Cheryl Ann Williamson and (not pictured) Malika Jackson, Mary Cat Tepper and Christine Liz LaRue.

A “tree person” sculpture by Cheryl Ann Williamson. Nature is the inspiration for Williamson’s work. (photos by D. Liddicoatt)

Although they have different backgrounds and unique styles, the nine artists featured in “Women’s Work” are united by one thing: clay.

A medium using natural elements from Mother Earth, clay is not only the foundation of their ceramics; it is the basis of the current exhibit at the Beverly Arts Center (BAC) that explores feminine empowerment through the creative process of working with clay.

“Women’s Work” was conceived by one of the artists, Dawn Liddicoatt, who has lived in Beverly for 35 years. All nine create together as members of the Hyde Park Art Center (HPAC).

“There is something very empowering, very elemental, about digging your hands into the earth—as artists and gardeners will tell you,” said Liddicoatt. “The process of creating, of birthing, using clay from the earth, is feminine power.”

Liddicoatt began dabbling in art in high school, but she did not pursue it seriously until later in life. With a master’s degree in counseling, she was working at Chicago State University as director of teacher certification when she approached a ceramics professor about doing independent study. The professor agreed, and Liddicoatt started by making pots.

After retiring from Chicago State, Liddicoatt took classes at the HPAC, and she began to experiment with color and texture.

The pots evolved into what Liddicoatt calls “lynch pots,” each with holes representing fatal police shootings within a state, tagged with the victims’ identifications and trinkets of a childhood nature to indicate that each victim started life innocently.

Clustering the ID tags by race clearly shows the disparity in the number of shootings, and her pots have been included in numerous shows and exhibits.

Liddicoatt also studied sculpture at the HPAC. Her interest and research into history led to a fascination with Venus figurines, statuettes of women that date back for 25,000 years. Liddicoatt’s vision of these female figurines has become her signature art form.

Another artist in the exhibit, Cheryl Ann Williamson, is also from Beverly. With a bachelor’s degree in art education, Williamson taught for 30 years in the Chicago Park District and now teaches handbuilding and wheel-throwing ceramics techniques at the HPAC.

Williamson, a certified herbal therapist who advises people about the use of herbs for healing, also teaches classes on growing organic food. She said her interest in horticulture feeds her main passion: gardening.

However, her art is also inspired by nature. She creates “tree people,” and each is unique. She also imprints her clay works using leaves from her own natural trees.

According to Liddicoatt, the exhibit grew out of her involvement with the BAC Diversity and Inclusion Committee, which formed last year to lead efforts to further the core values of inclusion, diversity and equity in BAC operations and programming.

“The goal was to bring in more diverse artists and audiences,” Liddicoatt said. “‘Women’s Work’ features African-American, Asian, Middle-Eastern and Caucasian women, as well as representation from the LGBTQ community, and different age groups. We want to expose people to artists from backgrounds other than their own, to encourage appreciation for both the diversity of the artists as well as the art itself.”

“Women’s Work” first opened in March for Women’s History Month, but it was forced to close soon after because of the coronavirus. The exhibit reopened in late July with a limited schedule in adherence to pandemic guidelines established by the Centers for Disease Control and state and local government officials.

The pandemic’s impact on the exhibit has understandably disappointed the artists. Three of them have not even been able to visit the BAC in person. Not being able to view the exhibit was also a loss for patrons and art lovers.

Liddicoatt said the women were also disheartened that plans for a panel discussion had to be cancelled.

It would have featured African-American women from Diasporal Rhythms speaking about collecting art by female artists. Diasporal Rhythms is a group of art collectors who foster the appreciation of visual art created by contemporary artists of the African diaspora. The group works with schools and museums and hosts home tours.

According to the BAC website, all visitors must wear facemasks at all times; hand sanitizing stations are installed throughout the building; and maximum-capacity and social-distancing guidelines are being enforced. For more information, call the BAC at (773) 445-3838.

As the artists in “Women’s Work” continue being empowered by their creativity and artworks from clay, it’s likely they believe in the old saying, “A woman’s work is never done.”

Fortunately, with the diversity of the works they’ve already completed, the exhibit provides something new for viewers, organizers said, and the community’s continued support of art exhibits that can be safely operated will keep these opportunities available.