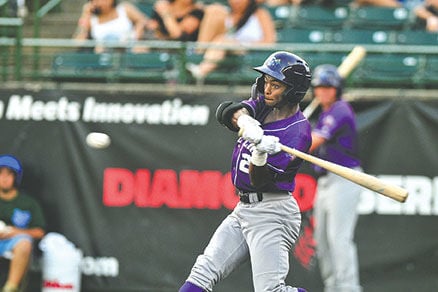 James Davison, a Morgan Park High School grad, connects for a triple in the Lake Erie Crushers’ game against the Windy City ThunderBolts. Davison came up a home run short of the cycle, finishing 3 for 4 with a RBI and 2 runs in the Crushers’ win. (Review photo) 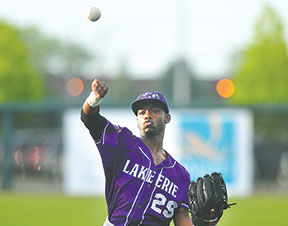 James Davison warms up in the outfield prior to a game between the Lake Erie Crushers and the Windy City ThunderBolts. In 2014, Davison helped Morgan Park High School to the city title, the program’s first. (Review photo) 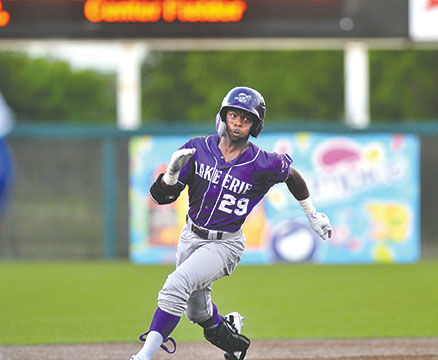 James Davison, a Morgan Park High School grad, connects for a triple in the Lake Erie Crushers’ game against the Windy City ThunderBolts. Davison came up a home run short of the cycle, finishing 3 for 4 with a RBI and 2 runs in the Crushers’ win. (Review photo)

James Davison warms up in the outfield prior to a game between the Lake Erie Crushers and the Windy City ThunderBolts. In 2014, Davison helped Morgan Park High School to the city title, the program’s first. (Review photo)

James Davison’s goals haven’t changed. But in his second year of professional baseball in the independent Frontier League, he’s changed his outlook.

The Morgan Park High School (MPHS) grad is still grinding away and chasing his dream of playing in the big leagues, but he’s not overly focused on that goal. He’s going to enjoy the ride.

Davison returned to Chicago with the Lake Erie Crushers in a two-game series on June 28-30 against the host Windy City ThunderBolts in Frontier League action.

“Everybody here is trying to get to the next level,” Davison said. “Coming into the season, I thought I wanted to get out of here as fast as I can. Recently, I’ve been taking it day by day. The more I learn about myself at a young age, when I do get my opportunity I’ll be ready. I’m enjoying my experience. I’m having fun.”

A 2014 MPHS grad, Davison has been a staple in the Crushers lineup this season, switching between the leadoff spot and the nine hole as well as holding down center field on defense.

The fleet-footed left-handed hitter came into the series in a bit of a slump, but he wasted little time turning things around. In the series opener, Davison came up a homer short of the cycle, going 3 for 4 with a RBI and 2 runs scored.

Davison’s family and friends were in attendance at each game during his Chicago return.

It’s been a whirlwind year-plus for Davison after a collegiate career that included playing time at the University of Miami and St. Mary’s University, in San Antonio, Texas.

Unsigned after the 2018 MLB Draft, Davison started a new job before finally catching on with the Frontier League’s Normal Cornbelters.

Some luck was on his side, however, as Normal left the Frontier League but traded Davison to Lake Erie before folding.

“That was a blessing in disguise,” Davison said. “A lot of the guys on the team became free agents, but I had a job. That took a lot of stress off going into the offseason.”

With a taste of pro baseball, Davison spent a busy winter honing his game. He put on muscle in order to endure the long season. He also worked on everything baseball, from getting better reads in center to improving his baseball IQ.

Last winter, Davison also coached with the Chicago White Sox’s Amateur City Elite (ACE) team, a program that provides baseball resources for inner-city youths. Davison is an ACE alumus. He hopes to coach with the program again this offseason.

Mt. Carmel star shortstop Ed Howard (Oklahoma) is a player with the program.

“Ed’s my blood. Our dads are best friends,” Davison said. “I try and mentor him and teach him how to be a pro. He’s working hard. I’m working with him and my trainer every day in the winter trying to get better mentally and physically. It’s learning your body and learning the ins and outs of the game and growing every day.”

With the Frontier League at the season’s midpoint, Davison is hoping to help lead Lake Erie to a spot in the playoffs.

Through the Windy City series, the Crushers posted a 20-21 record and were tied with the Schaumburg Boomers for first in the East Division standings.

In the meantime, Davison will keep working to improve each day, but he’ll also take time to savor the not so glamorous but always fun life of a minor league baseball player.

He lives with a host family in Avon, Ohio, lifts weights several times a week and gets to the stadium early each day.

Up or down, rain or shine, the 23-year-old Davison is loving where he’s at.

“Working with ACE or at a game, you see the kids. They want autographs,” Davison said. “It’s the love of the game that you try to instill in kids at a young age. It might be the next Mike Trout or Bryce Harper coming to an independent league game. I’m doing something I love. Getting a chance to step on the field every day, I love it.”