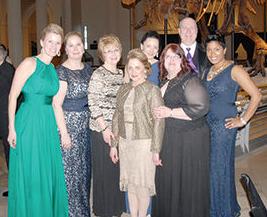 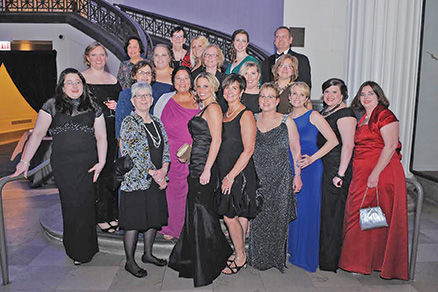 Members of the Little Company of Mary Hospital (LCMH) Intensive Care Unit nursing team gather after receiving the hospital’s Sister Nancy Boyle Award for Excellence at the LCMH Crystal Heart Ball at the Field Museum of Natural History on Feb. 7.

Members of the Little Company of Mary Hospital (LCMH) Intensive Care Unit nursing team gather after receiving the hospital’s Sister Nancy Boyle Award for Excellence at the LCMH Crystal Heart Ball at the Field Museum of Natural History on Feb. 7.

On Feb. 7, a local group doing its part to fight domestic violence received a huge honor for all of the work it has done in only four years.

“It’s a wonderful feeling that the issue is recognized,” Ryan said. “This night is for the clients.”

Hundreds poured into the Field Museum of Natural History for the 25th edition of the ball, which also celebrated the 85th anniversary of LCMH.

According to its Web site, AND, which was founded in 2011, provides a wide range of services to clients, including children, at no cost to the client, including domestic violence crisis intervention and safety planning; domestic violence counseling, education and support; individual child therapy for children ages 3-18; and legal advocacy.

Ryan, who’s lived in Beverly for 30 years, said the award was a credit to her board of directors, the neighborhood providing its support, and the women who have used AND services to transform their lives.

“It’s the community that spreads the word—and the former clients, women coming in as victims and then coming out as survivors, that got the next person in,” Ryan said. “They spread the good word.”

According to the National Domestic Violence Hotline, nearly 3 in 10 women in the U.S. have experienced rape, physical violence and/or stalking by a partner and report a related impact on their functioning in daily life; 1 in 10 men in the U.S. report the same. The hotline also reports that from 1994 to 2010, about four in five victims of intimate-partner violence were female.

In 2014, NFL player Ray Rice was suspended for the season after a video was released showing him knocking his then-fiance unconscious in an elevator, drawing outrage around the country.

According to its Web site, AND is “dedicated to helping women break the cycle of violence.” In 2013, AND added a children’s therapist. In its short existence, the organization has already made tremendous progress.

“It’s because of women being able to overcome their barriers … and they’re realizing that, and what they had to overcome, to lead a life that people admire,” Ryan said.

In accepting the award, AND Board President Jessica McCarihan recited testimonials from two survivors, describing the way they regained control over their lives. She was also inspired to help start the organization, she said, when a friend called her desperate for help after being abused.

McCarihan said the award is a credit to the way the neighborhood has rallied behind the organization.

“It’s very nice for the community to recognize the work that we do,” McCarihan said. “And we couldn’t have done it without the community, because they’re our biggest supporter. So we’re accepting this with them, because they help us fulfill our mission.”

Kristy Arditti, children’s therapist with AND, had worked with Ryan for another local organization that supported abuse victims. When that organization closed, she teamed up with AND.

Like her other team members, Arditti deflected the recognition that comes with the award.

“I feel like my clients are my biggest inspiration,” Arditti said. “And I feel like they’re the ones who make this award possible. I feel like it’s not my award.”

During the ball, the LCMH Intensive Care Unit nursing teams were presented the Sister Nancy Boyle Award for Excellence and lauded for, as one doctor said in a video honoring them, working “in the trenches” at the hospital.

The event also had a somber tone, as the hospital community mourned three nuns who died last year. Sister Kathleen McIntyre passed away April 21 after a six-month battle with cancer. Sister Jean Stickney and Sister Kab Kyoung Kim both died in a car crash in Oak Lawn in October when a man driving the wrong way struck their vehicle at the corner of 95th Street and Cicero Avenue.

Despite those somber emotions, they were many moments of joy.

Attendees gave a standing ovation to Sister Sharon Ann Walsh as she presented one of the evening’s awards. Walsh was driving the car that Stickney and Kim were in. She drew one of the many standing ovations that were given that night.

For more information about AND, visit the Web site at anewdirectionbmp.org.